But you’re not sure how to train for it—or, once trained, how to execute the perfect race.

Relax. You’re not alone. Every year, between nine and ten million Americans run a 5K race. Some are happy just to finish. But others, like you, want more.

Training for a faster 5K has more to do with variety, fun, and self-confidence than it does with pain, discipline, and sacrifice. The trick is making sure that your training and lifestyle adjustments provide the keys for unlocking your 5K potential.

You toe the line for your 5K race. The starting horn sounds. Now what? Now you run a mistake-free race that nets you your 5K goal performance. To accomplish this, you’ll want to adhere to a few simple guidelines:

No Sprinting off the Start Line

While you want to make sure you have good position 400 meters into the race, that doesn’t mean sprinting off the start line. The first 30–40 seconds of the race will be the most anaerobic. The faster you run, the more negative by-products of anaerobic energy production you’ll accumulate. That translates to increased fatigue early in the race and a painful slog to the finish. This doesn’t mean you should dawdle. Get up to race pace quickly. But don’t sprint. The laws of physiology don’t get suspended just because it’s a race.

Some runners try to run the first mile 10–20 seconds faster than goal pace. They think this allows wiggle room later in the race. It doesn’t. Running 10–20 seconds faster than 5K pace puts you right on 3K pace. A 3K is a little less than 2 miles. That means you’re running a pace you can sustain for less than 2 miles, while thinking you’ll somehow stretch your effort to more than 3 miles. You won’t. You’ll bonk.

There is only one finish line, and it’s at the finish. Yes, we’ve all been there—in the middle of a race, settled into our pace, when suddenly some hard-charging runner edges ahead of us. A primitive fight-or-flight response kicks in, and you think, “No way!” So you fight off the challenge. Congratulations, you just sabotaged your 5K. Accelerating mid-race demands greater muscle-fiber recruitment and an increase in anaerobic energy production. There’s a price to pay for that. It’s called fatigue.

Draft off Other Runners

There’s a physiological benefit to running directly behind other runners. By cutting down wind resistance, you decrease the amount of force you must produce. There’s also a psychological advantage. Instead of having to focus on pace, you relax and let someone else worry about it. As long as other runners are setting a pace that matches your goal, use them to your advantage.

The shortest distance between two points is a straight line. If you see that you’ll be making a left-hand or right-hand turn up ahead, run a straight line toward that corner (unless your straight line takes you through another runner, in which case you’ll need to opt for a slightly modified course). And if you’re running through a gradual curve, hug the inside. Just as running in lane two on a track forces you to run farther than in lane one, running wide on a turn adds distance to your race.

It sometimes seems as if the runners around you look fresher and less stressed than you feel. You start to think that maybe you’re in over your head. You’re not. The other runners are just as tired as you. If they weren’t, they’d be way ahead of you.

There will come a time in your 5K when you’ll want to quit. You’re tired. You hurt. You start to think it isn’t your day. Maybe you even think, If I faked an injury, no one would blame me for stopping. Don’t do it. This is just your brain trying to sabotage your race. Remember: Your brain is a worrywart. It’s sounding a five-alarm warning—fatigue and self-doubt—to get you to give up. Hang in there. Your brain will chill after a minute or two, just in time for you to kick to the finish line.

Target an Even Effort for Your Race

This is probably the most important advice: Run 98% of the race, from the start line until the moment you begin your finish sprint, at an even effort. Effort. Not pace. There’s a difference. 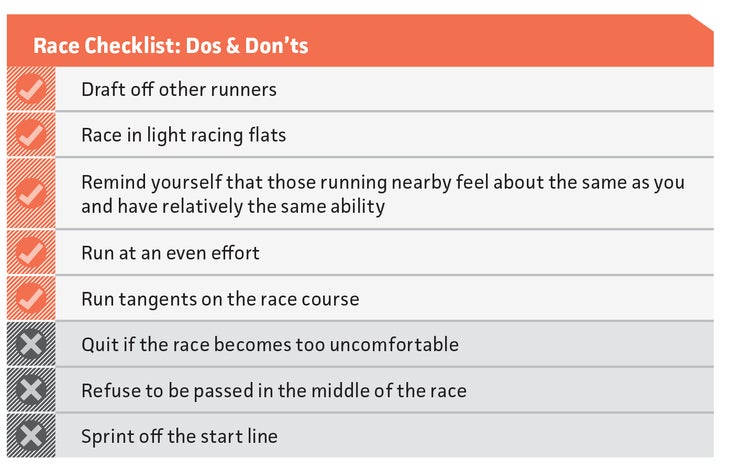 You run each mile (or kilometer) of your race at the same, predetermined pace (e.g., 6-minutes-per-mile). The problem with this approach is twofold. First, terrain, weather, and the presence of other runners makes it hard to do. Second, you simply don’t know what the “right” pace will be for race day—guess too fast, and your legs won’t last; guess too slow, and you rob yourself of the chance to snag a massive PR.

You choose a consistent level of energy expenditure that feels right for race day. You rely on external and internal cues to adjust your pace. Your effort won’t “feel” the same throughout the 5K. You’ll experience increasing fatigue as the race progresses. But you’ll burn energy at a consistent rate. To succeed with this approach takes practice, practice, practice. The good news is that a proper training program provides that practice. (One trick I’ve used for years is to ask myself at intervals throughout a race, “Can I make it to the finish line at this pace?”—it’s amazing how accurate the feedback from that simple question can be, if you’re willing to take it.)

Implementing the advice in the previous eight guidelines will result in a race that hurts less and gets you to the finish line faster.

Adapted from Fast 5K: 25 Crucial Keys and 4 Training Plans by Pete Magill with permission of VeloPress.