We all expect our smartphones and our cars to get a little better each year. But as runners, we also expect ourselves to improve from year to year. Unlike the products we buy, though, faster race times, increased fitness and lower body-fat percentages don’t come to us if we simply wait for them. To be a better version of you in 2018 than you were in 2017, you have to make it happen.

This doesn’t mean you have to do it alone. Our four-week guide to making this your best year ever will get you started on the right foot, so to speak. We’ve assembled an international team of experts who will show you how to build a solid new running foundation after time off, incorporate cross-training into your routine to boost fitness and slash injury risk and clean up your diet. All you have to do is, well, do it!

There’s nothing wrong with taking a planned break from running. In fact, it just might be the best thing you can do now to set yourself up to run better. “I have all of my runners take at least a week and up to two weeks off after their last big race of the season,” says Ben Rosario, coach of HOKA One One Northern Arizona Elite, a professional running team based in Flagstaff, Ariz. “Both the body and the mind need a chance to regenerate periodically.”

When you resume running, it’s important that you do so in the right way. Rosario advises getting back to your normal frequency of running right away, whether that’s four runs per week or six, but keeping your runs short initially. Although you might think it would be wise to avoid fast running for the first several weeks, Rosario recommends sprinkling in high-intensity work in small doses.

“You need to make it exciting,” he says. “Doing everything easy is boring.”

Zone 1 (Z1): Easy. This is an effort level you feel you could sustain indefinitely.

Zone 2 (Z2): Comfortable. Just a bit faster than Zone 1, this is an effort level that still allows you to speak in full sentences without losing your breath.

Zone 4 (Z4): Hard. Tailor these efforts to the distance or duration of the intervals you’re running. A very short (20-second) Zone 4 effort should be run as a relaxed sprint, whereas a somewhat longer one (300 meters) should be run at the highest speed you could sustain for a mile or so. 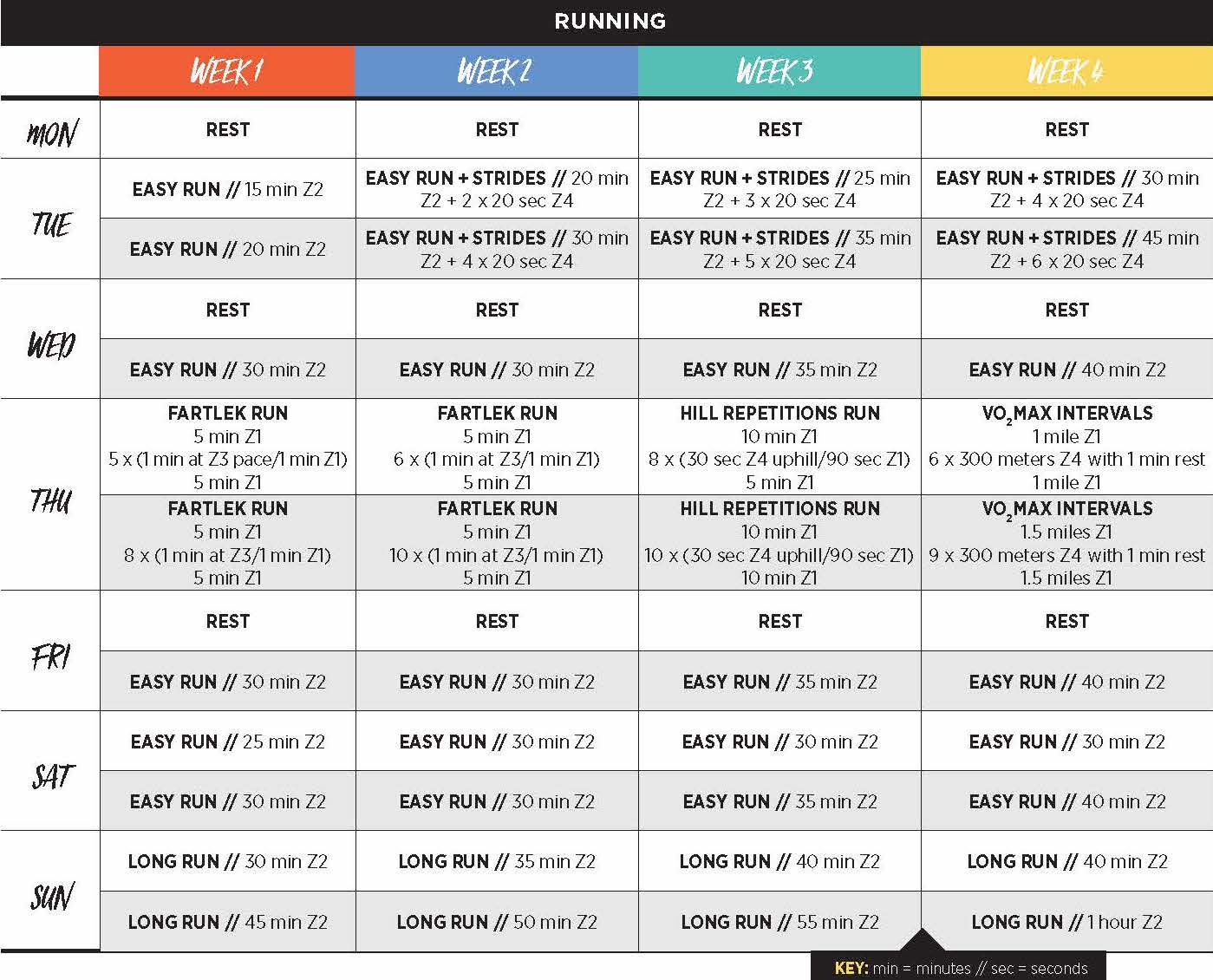 A healthy diet is nothing more than a collection of healthy eating habits. If you want to elevate your running in 2018 with better nutrition, you don’t have to “go on a diet.” You just need to take a systematic approach to building better habits. This is the approach that Georgie Fear, R.D., coauthor of Racing Weight Cookbook, takes with her clients, and it works.

“Building up consistent, healthy habits is what makes excellent nutrition a sustainable thing,” Fear says. “You know a single run won’t make you fit because it’s the regular running on many days that makes you an athlete. Same with healthy eating. If you take a week (or longer) to consistently work on improving one area of nutrition, it makes a more lasting impact than shooting for random different aims each day.”

Fear’s four-week diet cleanup plan focuses on four eating habits that are especially important for runners. You’ll work on one habit per week, doing something new to instill it each day. “Without counting anything, you’ll end up with more nutrient intake, less empty calories and a consistent flow of energy into your body to support your workouts,” Fear says. 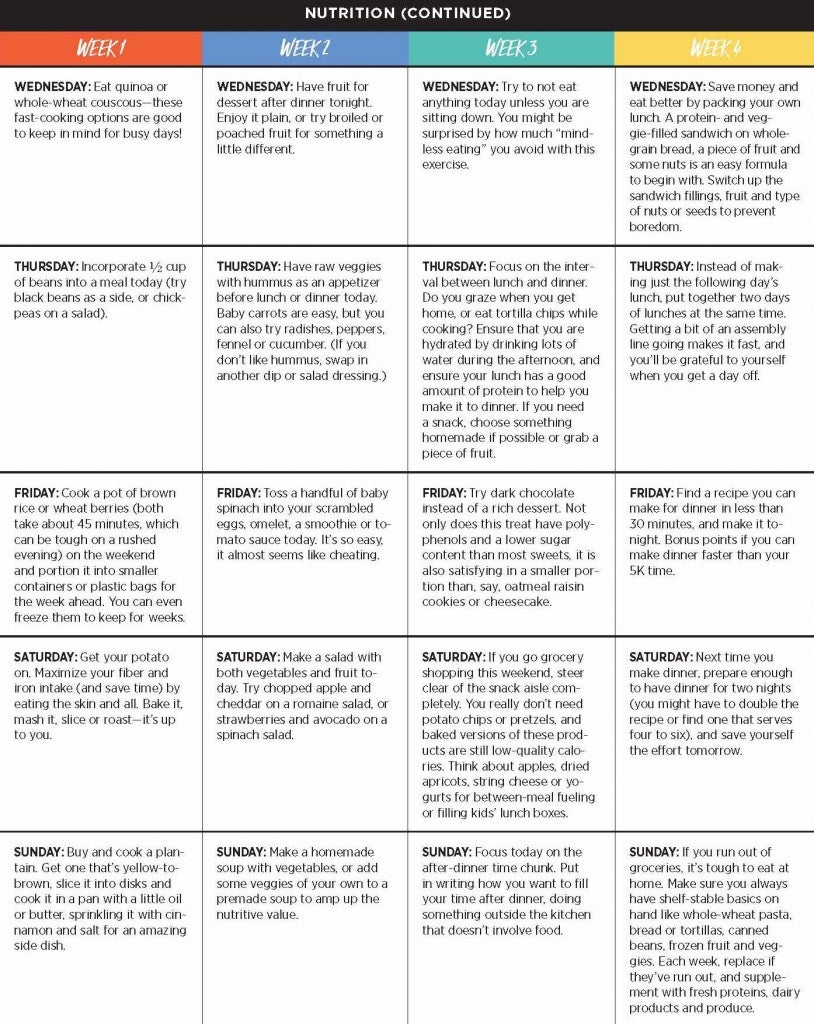 Many runners don’t cross-train until and unless an injury prevents them from running. But a proactive approach to cross-training that incorporates one or more nonimpact activities such as bicycling and elliptical running can help you avoid getting injured in the first place while also giving your aerobic fitness a boost. Make 2018 the year you put cross-training to work for you with one of these two cross-training plans for runners designed by Tom Craggs, a coach for RunningWithUs and the UK head coach for Polar and Medichecks.

The beginner plan (unshaded rows) is for runners who currently train about four times a week and feel stuck in a rut with their fitness. “This plan might actually see you running less but training more and with higher quality,” Craggs says. The advanced plan (shaded boxes) is, according to Craggs, “for competitive runners who might be training five, six or even seven days a week but who struggle with niggles or injuries.”

Both plans use the same intensity scale presented on page 56 in connection with the running plan. Feel free to do cross-training (“XT”) workouts in any legs-dominant aerobic exercise modality. 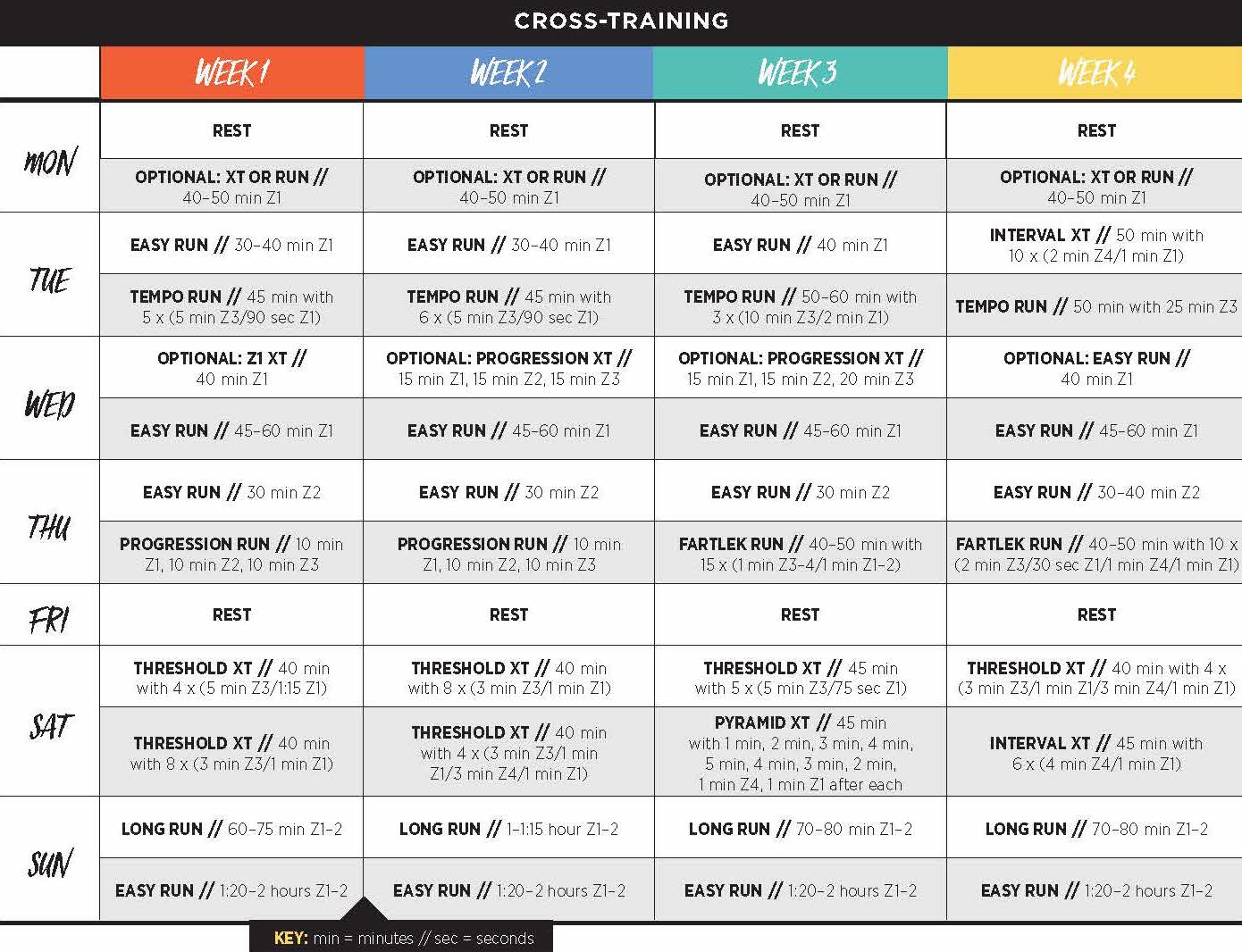 Weekly Tempo Runs Will Build Your Capacity at Marathon Pace

Why Off-Seasons Are Necessary For Runner Recovery