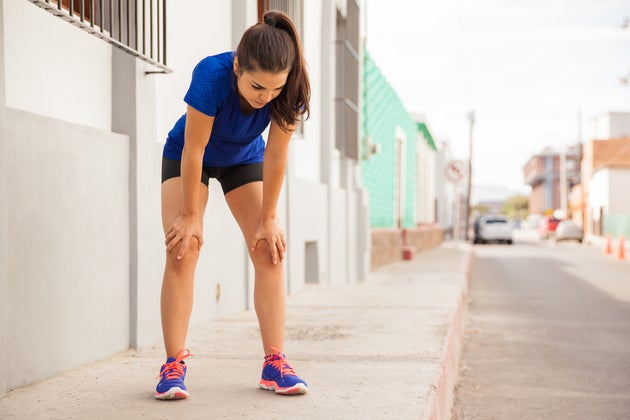 Sometimes Your Body Needs A Break

You probably won’t realize it’s happening. You’re tired but can’t sleep. Your workouts feel strained. You’re not motivated to run. If that sounds familiar, you might be overtraining.

But overtraining might not just come from too many miles. According to experts, it could be caused by outside forces in your daily life as well.

“If your work/life is so busy that you cannot fit in a demanding training schedule and enough recovery time, then you risk overtraining,” says Becca Menke, a certified running coach who blogs at RabbitFoodRunner.com.

Sometimes called “overtraining syndrome,” overtraining creates “an imbalance” in the body, says Dr. Phil Maffetone. Too much exercise and not enough rest can lead to injury, fatigue, anxiety, depression, disturbed sleep and other problems.

“While there is not a consensus about what to call this problem, it is a real, serious and common one impairing health and fitness,” Maffetone says, estimating that some 60 percent or more of both recreational and competitive athletes may be overtraining.

Overtraining doesn’t just point to a daunting training load, says Jacque Crockford, a certified personal trainer and exercise physiology content manager at ACE Fitness. You’re also more at risk for overtraining if your daily life is strained, and you’re not getting enough rest.

“Because sleep and diet contribute to exercise recovery, having a proper work and life balance is essential for recovery and reducing the risk for overtraining,” she says.

The number of women who say they are stressed is nearly double that of men, according to the National Institute for Health Resource. According to Menke, much of the time, women exercise to help allay stress, but it’s a balancing act.

“Exercise can help reduce work and life stress by releasing endorphins,” she says. “However, if you have a busy life and you try to stick to an exercise routine that doesn’t schedule enough recovery time, it can lead to overtraining and mental burnout.”

“Mentally, you might feel frustrated because you are not able to complete a workout,” Menke says. “What should be an easy run feels really hard. You are pushing yourself in the workouts but not seeing any progress. You might be plateauing or even getting slower. All of these are discouraging and can lead to a mental slump, moodiness and depression.”

Runners are well known for pushing themselves in workouts, but there’s a difference between overtraining and a hard effort, Menke says. She says you might have some soreness after a hard workout, but that should resolve within 36 to 48 hours later.

“With overtraining, there’s a persistence of feeling tired and worn out,” she says.

Maffetone says you can easily fall into overtraining without even realizing it.

“Stress is an important part of running,” he says. “We stress the body a little bit, we recover, then we improve. Too much stress, however, interferes with that natural process.

“If we need more sleep but don’t get it, need to slow down or take a day off but don’t do it, stress continues accumulating,” he adds. “At some point, signs and symptoms of overtraining develop.”

You can avoid burning out physically and mentally by scheduling—and sticking to—rest and recovery days.

“It’s during the rest and recovery days when you actually get stronger,” Menke says. “You allow the body time to repair the muscles from the previous hard session and make fitness gains.”

To help keep from overtraining, Crockford, who is training for an Ironman triathlon, says she has planned recovery days of foam rolling, gentle yoga and massages. She says recovery is just as important to getting her to the finish line.

“It is important to push the body beyond its comfort zone. That’s where the magic happens,” Crockford says. “However, if recovery isn’t part of the training plan, the training plan won’t matter.”

Overtraining “reduc[es] the enjoyment of the process,” she says. “As they say, it’s not the destination that matters. It’s the journey.”

The Mental Component To Running Injuries

7 Ways to Use Yoga Blocks to Open Your Hips

When Should You Skip a Run?

The 10 Commandments of Injury Prevention

Recovery Runs 101: Everything You Need to Know About Taking it Easy