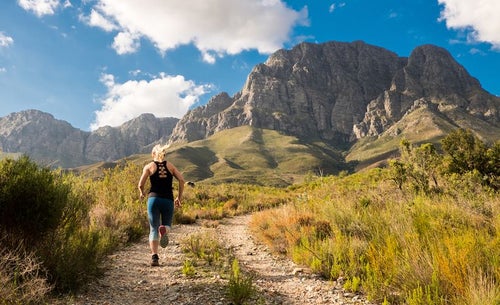 As a teenager in high school I was the “brain.” I hated phys–ed because I always felt so uncoordinated and nonathletic. I seemed to be good at zero organized sports. I come from a family of academics, so sports was never really encouraged in my family as a worthwhile pursuit.

Sometime in my early 20s I discovered the joy of running. I live in Gettysburg, Pa., the site of the famous Civil War battle. We are so blessed to have incredibly beautiful battlefields surrounding the town—it’s a runner’s paradise, really, with lots of huge hills and many, many statues to cheer you on as you log miles.

I found that running helped heal my soul. It became my way of dealing with much unhappiness in my life. I felt like if I could run, I could manage anything life threw at me. It gave me a reason to get up and out of bed each morning. My family never understood this growing passion and would often put it down and tell me I didn’t have time to run, or it wasn’t important. I have had to fight for my time to run for 35 years, it seems.

On one springtime morning run, I fell and tore my right ACL. At that time the doctor told me I was too old to have the surgery and that, because I was a runner, I didn’t really need to have the repair done. That was a mistake. I continued to run. Due to that injury, my knee became very unstable and my cartilage began to weaken and rip even more. I suffered stress fractures on the opposite leg that went straight through the tibia and fibula due to overcompensation. I had to stop running for a time to heal and was blessed at that time to find an incredible orthopedic surgeon who was a runner. He had run several marathons and ran every day. He understood that running was what kept me going. The cartilage in my right knee kept tearing, so he scoped the knee several times. I continued to run. He did advise me that if I continued to run, I would end up totally ruining the knee and would have to have it replaced. Well, I kept running. Eventually I had worn off an inch of my tibia and was forced to have my knee replaced in 2012. I was 48 years old. The doctor said it was the worst knee he had ever operated on.

As you may know, one is not allowed to run with a total knee replacement. It’s just not done. The doctor told my mother that if I did, it was totally against doctor’s orders. I thought my life was over. But I had the best physical therapist, and I spent five hours every day for three months rehabbing. The desire to run motivated me. I worked and worked. About four months later, I ran on turf at Gettysburg College. I slowly made my way back to running. It was incredibly hard.

Less than a year after I had the replacement, I fell on a run and broke my left fibula. Doctors said the fall was due to my imbalance and running with a total joint replacement. I had a friend who owned an AlterG [an anti-gravity treadmill], and I was blessed to be able to use that while I was injured. I got to run. While I was using it, I had the wonderful fortune of getting to know Neely Spence Gracey. Neely and I were both injured twice at the same time, and we both used the AlterG. We were really the only two that used my friend’s machine. We got to know each other pretty well. She is incredible and has been an inspiration and a help to me ever since.

Folowing that injury, I returned to running. I was trying to better my pace and was thus doing speed work on a track. That was really dumb for a person with a knee replacement, but I was upset at my pace and thought this kind of training would help. Sadly, I tore my right hamstring completely off the bone. That injury was very severe, and took me almost a year to heal. I continued trying to run during that time and suffered four fractures to my right foot during the process. The doctor pulled me away from running, saying that I was actually in danger of having a foot that would not even work properly.

Through it all, I had faith that my foot would heal. And it has—despite the fact that I am still running on it. As you can imagine, my doctors are amazed that I can run and that I do run, despite the horrible pain and all the injuries I’ve experienced. They say I am the most driven athlete they have ever seen.

I desperately wanted to run a race at least once following my knee replacement. My doctors told me that a full marathon was totally out if the question, and even a half wouldn’t work. In the fall of 2015 I tried to train, and one week before the half marathon I was aiming to race, I tore my gluteus medius. Once again, I was out.

I healed and decided in the fall of 2016 to attempt a half marathon again. I ran the Gettysburg Half Marathon and was so, so incredibly happy. The work was so worth it.

Last July, I once again suffered a bad injury: I tore my right iliopsoas tendon. I could barely walk, and I have had pain ever since. Meanwhile, my other knee—which has severe arthritis—needed to be operated upon. Currently, doctors have prescribed platelet-rich plasma (PRP) therapy to keep me running.

Due to my gait issue, I also fell on the ice last winter, tearing my left rotator cuff off the bone. In one sense, my doctors are quite unhappy, as they feel this is all the result of running with a replaced knee. I am unbalanced and have severe gait issues, which caused all of these injuries. But they also love my dedication to the sport and feel that I am the way of the future, since increasing numbers of young people who get knee replacements want to continue running.

This spring, I ran a 10-mile race with my beautiful daughter. It was so special; it meant everything to me. I have inspired all three of my children to run and to love it. Three weeks after our 10-mile race, we ran the Gettysburg Half Marathon together. Those runs were so meaningful to me. I hoped and prayed to be able to continue to run, and I can’t believe I have run two half marathons after my knee replacement. The doctors think I’m crazy, but they recently told me, “You are tough.” Days after racing the Gettysburg Half, I learned that I have another stress fracture in my right foot.

This is my story. No one ever thought I would run after my knee replacement. Everyone said I couldn’t ever run another half. And yet, here I am: totally broken physically, some might say, but I’m still out there running and enjoying every mile, often despite incredible pain. It’s been worth every bit of that pain.

I’ve been told by so many runners—those injured and uninjured, slow and fast, casual runners and pros alike—that I am their inspiration. That makes me feel honored and special. If I can inspire or help one person, that’s worth it.

Running is a wonderful sport filled with incredible people. We are all in this together.

Real Runners: Running Saw Me Through Cancer Remission And A Broken Leg

Americans Light Up the Indoor Track