It’s annoying and painful, tingling and achy. It can be prevented if you make time for strength training, but many runners forgo it and before they know it, they are sidelined for months. The culprit? Iliotibial band syndrome—or IT band syndrome.

The iliotibial band connects from above the hip to right below the knee on the outside of the leg. IT band syndrome is a tightening and/or inflammation of the iliotibial band, causing it to rub against the thigh bone. When the connective tissue rubs against the thigh bone, extreme discomfort or pain is felt. It is normally caused by overuse, both in running too many miles and in relying on its support when your hips and glutes aren’t doing their part.

If you have an IT band injury that’s keeping you from running, there are things you should know about treating it and preventing it from recurring.

How exactly does it happen? Dr. Alice Holland, a physical therapist at Stride Strong Physical Therapy, describes the act of running as pogo-sticking on one leg, then the other. “If your hips are weak they are not going to be able to support your pelvis as you are running on one leg,” she says. “And it causes undue strain on the IT band because the body needs lateral stabilizers.”

According to Holland, when undue strain causes an IT band injury, the band begins to fray. The body responds to that trauma with inflammation and a fiber called fibrinogen that scars and adheres to the surrounding muscles. “It could be your quad, it could be your hamstring,” she says. “It depends on where the strain is felt because the IT band is really big and thick.”

The main pain is typically felt between the hip and knee—and it worsens with activity. Sometimes there is swelling around the outside of the knee, mainly common in long-distance runners.

Sometimes IT band syndrome can be misdiagnosed as lateral knee pain. “The typical complaint is pain and tightness on the lateral side of the knee with running,” shares physical therapist Rebecca Goldstein.

So what can a runner do to treat and recover from IT band pain? Rest, of course.

Treatments can take a few weeks to a couple months to fully heal IT band syndrome; four to eight weeks is the common recovery time. It was caused from overuse in the first place, so it needs time to recover and relax.

“The IT band is a tendinous sheath and cannot be stretched very well, which is why massaging and foam rolling are the best treatments to help loosen it up,” suggests Goldstein. “If you have inflammation along the IT band, icing should help as well.”

A sturdy foam roller helps release tension without causing more pain. “What you’re basically doing when you’re foam rolling is you’re breaking apart the adhesions of your IT band with the other muscle fascial groups,” says Holland. And releasing those adhesions will relieve the pain.

Here is a foam rolling routine to help you ease pain.

Roll out the TFL and Calves.

TFL—a hip flexor uses the IT band as its tendon to attach just below the knee. If the TFL is not loose enough, it applies pressure to the IT band, thus compressing the tissue and leading to sensations of a “tight” IT band.

Calves—while the calves may seem too far away to influence the IT band, if the ankle can’t move correctly, then the joints above it also aren’t moving correctly. Tight calves often force an individual to rotate their knee inward during walking and running. This motion leads to tight hip flexors and more IT band tension.

Roll out the IT band.

After the TFL and calves have been rolled, then move on to the IT band itself.

When rolling this area make sure to roll slowly to identify tender spots. When one is found, relax onto it, focusing on breathing. Then, while maintaining pressure, perform 3 to 4 knee bends in place. This movement will help to stretch the muscle and free up adhesions between the IT band and the quads.

Holland also recommends, once you find the painful adhered section, to roll your body forward and back (not just up and down) to massage out that adhesion. “You need to go in multiple directions to get the fiber to stretch on a micro level,” she says. 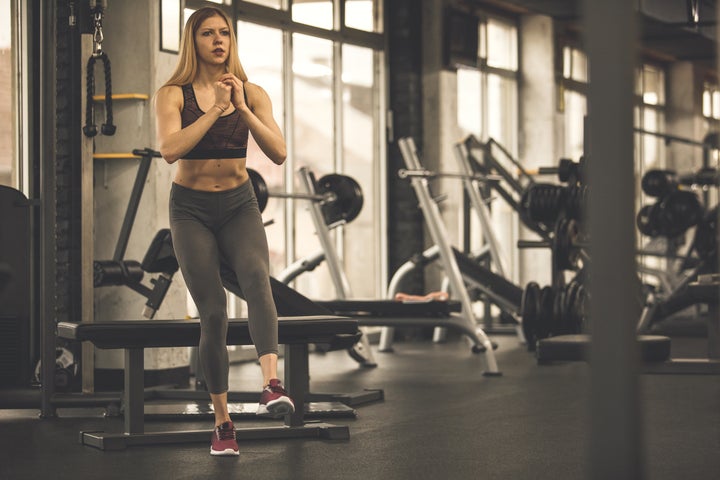 Foam rolling will only provide temporary relief. If you don’t work to improve the strength of your lateral stabilizers, you can expect to re-injure your IT band when you return to running.

After these muscles have been released and stretched, then you’ll need to perform strengthening exercises for glutes. Strong glutes will help to reduce the unnecessary stress and tension on the IT band and quadriceps.

Holland recommends single-legged squats as her go-to exercise for patients dealing with IT band syndrome. “It’s going to tax your quads, tax your whole system, but eventually you’ll start to feel a burning sensation in your butt cheek,” she says. “And that burning sensation is basically you trying to keep an even, stable pelvis standing on one leg, which is exactly what you’re doing when you are running.”

Do it: Stand on your left leg, lift your right one out in front of you. Keep your left knee over your ankle as you begin to squat down. Make sure your pelvis is even the whole time (Holland tells her patients to picture their pelvis as car headlights, always pointing forward). Put your hands out in front of you for balance, or hold on to a chair or any other support. Then return to standing. Start with three sets of 10 reps on each leg. Holland’s rule of thumb on reps: If you get to seven and you don’t feel the burn yet, bump your target up to 15.

“Everyone heals at different paces, so it may be different for each individual. If you’re eager to still work out, cross training is always a good option (e.g., biking, swimming, elliptical),” says Goldstein.

As always, speak with your doctor before beginning any treatment to get proper diagnosis, especially if the pain is preventing your from running or your daily tasks.

And practice patience. “You know how much you trust your coffee maker to give you coffee every day? You also expect your body to give you the same product every day and that’s just not true,” says Holland. “We are not machines.” Listen to your body and ease off when pain acts up.