A journal paper published a year ago went viral this week when it was tweeted by MC Hammer and then JJ Watt. It also attracted attention from runners, since it measured several recovery techniques used when interval training. The study found that putting your hands on your knees is much better for recovery than putting them on the back of your head. Here are all the details.

Researchers wanted to learn if one form of upper body position offered better recovery between interval-training repeats vs. another. Earlier studies had indicated that laying on your back is actually the best way to recover. But that was judged not very practical for interval training, so the new study compared two standing positions.

In one, subjects stood tall and clasped their hands behind the head. In the other, they bent over with at least 10 percent of flex at the spine, and supported their hands on their knees. When bending over, they were instructed to keep their arms straight.

The subjects were 20 female college soccer players accustomed to interval training. They had an average age of 20 years and an average BMI of 22.4. They appeared to be highly fit.

Subjects were randomly assigned to do two interval training workouts on a laboratory treadmill. They performed 4 x 4-minute intervals with three minutes of recovery, either hand on head (HH) or hands on knees (HK). They ran the intervals at 90- to 95-percent of their max heart rate.

The interval sessions were separated by seven days. Subjects used HH for recovery during one session, and HK during the other.

Immediately after each interval, subjects began breathing into a metabolic cart, while the researchers measured their Heart Rate Reserve (how quickly their heart rate dropped in the first 60 seconds of recovery) and how efficiently their lungs filled.

Why did this happen? The authors, from the exercise physiology lab at Western Washington University, believe that heart and lung recovery are enhanced by a position that maximizes the surface area of something called “the diaphragmatic zone of apposition (ZOA).” Raising the arms overhead actually restricts the mechanical efficiency of the thoracic wall and ab muscles. On the other hand, bending over and bracing the arms on the knees “improves respiratory function.” 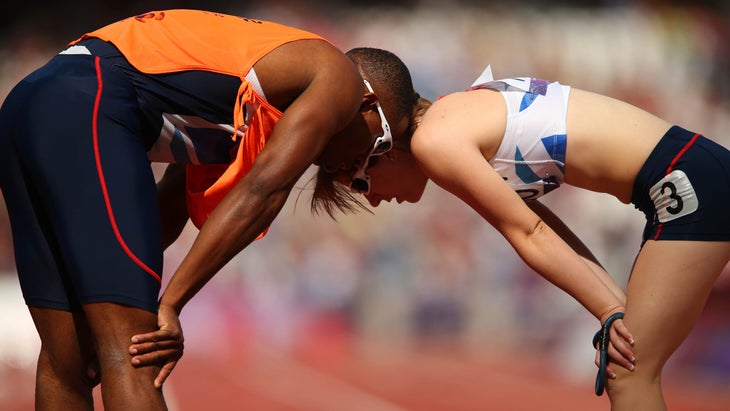 Libby Clegg of Great Britain and her guide Mikail Huggins rest after competing in the Women’s 200m during the 2012 London Paralympics. Photo: Mike Ehrmann / Getty Images

When subjects were using the HK position, they bent over a little bit more with each successive interval, as they became more fatigued. This was not part of the instructions given to them; it just occurred naturally. Their average degree of flexion increased as follows: 14.6%, 15.5%, 17.6%, and 19.5%. Thus, it appears that it’s natural to bend over more as you grow more exhausted.

The authors wrote: “The ability to recover faster from multiple bouts of exercise is a crucial part of optimizing performance for athletes.” Also: “Using the best posture during high intensity interval training is crucial to minimize fatigue and potential injuries due to altered biomechanics.”

The study did not measure performance, either in training or racing. It measured Heart Rate Reserve and lung function during recovery from interval training.

What the researchers told PodiumRunner

“The importance of this research is that the traditional recovery posture of upright and hands on head is not optimal for the diaphragm and recovery. In clinical situations, COPD patients are told to put hands on a table in order to gain better breathing when breathless. In hospitals, beds are not totally flat; they are set at 30 degrees, the Fowler position, to promote better breathing. A third trimester pregnant woman prefers more pillows to sleep, and breathe, comfortably. Famous athletes, including Michael Jordan and others, put hands on knees when there is a break in the action. The hands on knees is both anecdotally supported for better recovery, and now proven by research.” — corresponding author, Lorrie Brilla, Western Washington University

By using the hands-on-knees recovery position during interval training, you can help your heart and lungs recover faster. This could lead to better interval times in training, and, eventually, in racing.