When she was in high school, Lyndy Davis realized that instead of writing lengthy descriptions in her training log about how she felt during each training run, she could simply color-code her runs with appropriately chosen highlighters.

“The training journal already stated the facts: distance and pace,” she says, “[but] I was trying to figure out what workouts made me too tired, and what my week looked like before a good race versus a bad race. Color-coding was fun and helpful.”

A dozen years later, she’s blossomed into a 2:39 marathoner and moved her handwritten logs onto the Internet, but she’s never forgotten her original brainstorm. Not that she hasn’t refined her system over time. At one time, she rated her recovery/energy level on a 10-point scale. Now, she figures that six categories are enough, with the colors chosen along a spectrum that easily reflects how she feels.

Ideally, Davis says, “I want to hover training in purple or pink, then go to blue before the hardest workouts, and green for the race.” 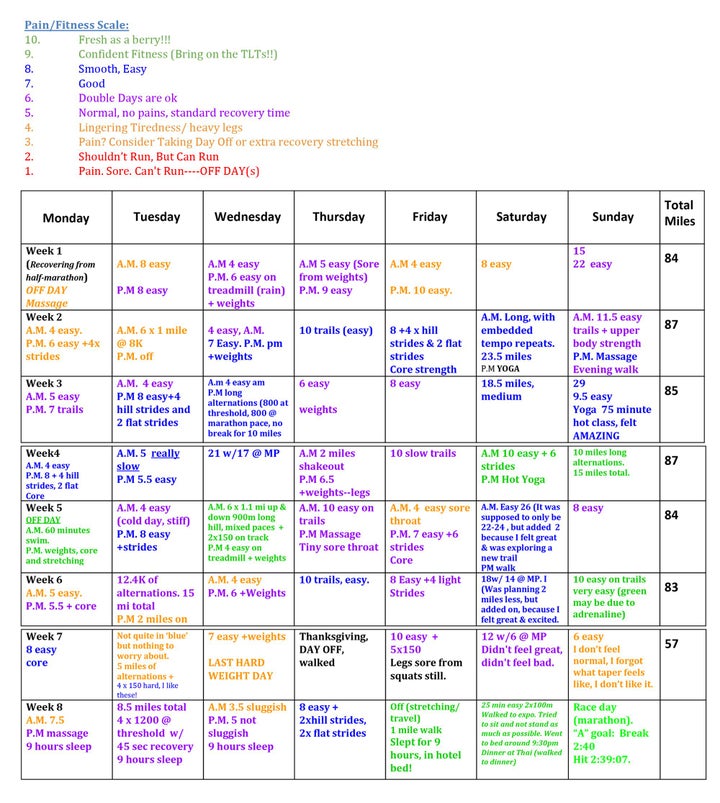 Coaches often say that they learn from their runners. I’ve been coaching Lyndy for five years, and her teenage brainstorm has become a major part of my routine, not only for her, but for others.

At one level, it’s not all that different from what many coaches normally do before a workout. “I like to ask the runner how they feel—a one to 10 number—as they get to the track,” says Portland, Oregon, coach Bob Williams, who adds that he’ll ask the same question again after the runner has warmed up.

A one to three, he says, means “go home.” A four is “somewhat recovered” but definitely not ready for a hard session. “Five is okay, but not fully recovered. Six to seven is feeling ‘kind of’ good and ready for a session, but [you] might need to modify it. An eight if feeling pretty good, and a nine to 10 is feeling fantastic.”

But useful as it is, that type of self-appraisal is simply a snapshot: An assessment of how you feel on the track, just prior to a workout. That’s important—especially for pulling the plug on hard workouts that might better be postponed.

But Davis’s color-coding scheme also helps you (and your coach, if you have one) spot patterns. Sure, you can track the same information with words, numbers, or emoticons. But colors leap off the page. “I can easily spot trends,” Davis says. “What if I had a great workout (on paper) but had been exhausted for four days after? These are the details that color-coding helps reveal.”

It’s also useful for understanding what’s normal for you. “For example,” Davis says, “I usually turn ‘orange’ for two days after a hard workout, but bounce back to ‘blue’ by the third day.” 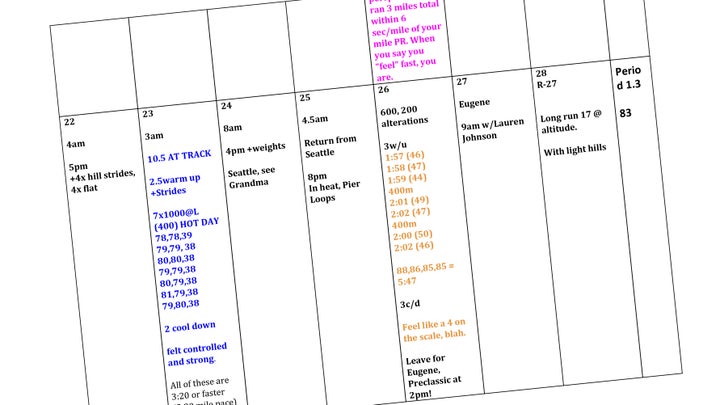 This is particularly useful in orchestrating tapers, especially for long races, like marathons and half-marathons. If you’re a week out from a marathon, and tired enough to be in Davis‘s orange/yellow, you need more rest, now.

But if ten days out you’re already in the blue, you might want a medium-hard workout in order to keep from going flat before the race. The goal is to hit the green on race day, not the week before.

This isn’t the only way this system can be used to spot trends. A couple of years ago, when Davis was in the first trimester of pregnancy and continuing to race, I spotted an intriguing pattern.

Thanks to the pregnancy, we weren’t seeing any green, and not a lot of blue. But somewhere along the line, I realized that she tended to feel her best the day immediately after a speed workout. I had no idea why, but the pattern was replicable.

So I threw normal taper rules out the window and had her run harder than normal the day before a couple of races.

Other patterns you might be able to spot this way have nothing to do with normal training.

Vacation trips, for example, especially if they involve higher-altitude exercise like backpacking, bicycling, or cross-country skiing, can give you big aerobic boosts when you come back home. But how much higher-elevation exercise produces that, and how long after the return is the ideal time for a race?

The answer is probably highly individual, but with the right type of logging, you might be able to spot your pattern and coordinate your vacation and race schedule to get the PR that’s been eluding you for years.

At a more mundane level, too many “unhappy” colors are a warning sign that you might need more recovery time. “Color-coding helps me avoid getting over-trained,” Davis says.

How, exactly, you code your log is up to you. What matters is that the color scheme makes sense to you, and is easy to spot. I have runners who write their entire description of each day in the relevant color…and others who are more subtle, such as putting a line of color-coded hash marks (#####) across the bottom of each day’s online entry.

This is, of course, no substitute for a face-to-face chat with a coach. But most runners self-coach…and even if you have coach, such a scheme can be extremely beneficial to both of you.