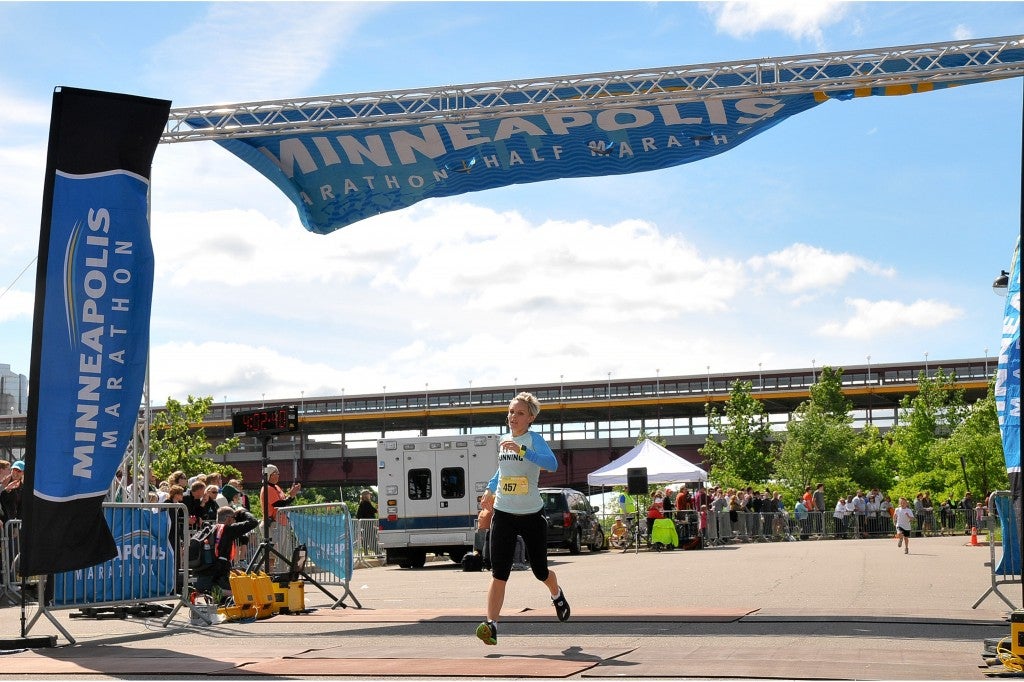 Alisha Perkins went from sprinter to soon-to-be marathoner after discovering the runner’s high.

We were in Fort Myers, Fla., in February 2011. Spring training is a weird thing—my husband is a professional baseball player. You are in a foreign city for two months with no friends (except your teammates) and no babysitters. You get where I am going with this? It was the kids and I together…24/7 for two months.

Since my kids were little and the games were too hot, we didn’t go. That year I never really saw anyone other than my husband. When he got home from the field he was hot and tired, but I was spent too and needed time away.

One day when he came home after work, I headed out for a run…not knowing that this run would change my running trajectory forever.

I ran my usual two miles (the amount I had determined was enough to allow me to eat chocolate and not be fat), but I couldn’t go home yet. I wasn’t ready. I convinced myself to keep going. I ended up running five miles, a full two miles further than I had ever run before.

I was a sprinter in high school, and my idea of long distance ended at 200 meters. My cousins tried so hard to get me to run a 4×400 relay with them, a full family relay, but I couldn’t fathom doing an entire 400 meters. (I really wish I would of done it. How many people can say they not only went to high school with their cousins, but also ran on a relay team together? We would have been awesome too.)

Not only did I beat my personal best length that day in Florida, but something else also happened on that run. For the first time ever I experienced the “runners high.” I am sure you have heard of this elusive phenomenon before—every runner talks about it. But until now I had no idea what all the fuss was about. Every time they mentioned it I played along feeling as though I was faking an orgasm.

I had never experienced what everyone eluded to, but on this magical day when I needed that precious time away from the kids, I had gotten there—the big runner’s high. Before those five miles I hated running. It felt too mundane and hard, but that was because I had never ran long enough to get that euphoric feeling.

RELATED: Real Runners: I Discovered The Magic Of Running Groups

The feeling makes you love running instead of loathe it. I tell everyone it happens after four miles (although it is just my theory). The high makes you want to keep going, makes you fall in love with each footstep and makes you intoxicated on the sport.

Something even greater happened for me out on that day though—the release and freedom of running. The release of all this pent-up anxiety in my body that I hadn’t found an outlet for until now. When I was first diagnosed with anxiety, my doctor told me that I had high levels of adrenaline running through my body, and had I not had really low blood pressure, they likely would have put me on a beta blocker instead of an anti-anxiety medication. In running I had found a way to release some of that pent-up adrenaline that did not involve bringing my heart to a slower pace. I entered the house that day feeling at ease and calm, something I hadn’t felt in a very long time. I was hooked. Right then and there I knew I was onto something. Glen, my husband, could tell too. He saw a more relaxed, calm, easy wife—and he liked it.

RELATED: 10 Reasons To Lace Up And Run

To this day when we argue he will casually say “Hey, when was the last time you went for a run?” He knows sometimes I can run it out, and then it doesn’t seem like such a big deal. He calls me his own springer spaniel; sometimes I just need to run.

So now I was going to be a “runner.” Truth be told, the word still frightens me. I feel like there is a stigma attached to it, like I have to prove something. I felt the fear and did it anyway. My therapist would be proud.

I decided to sign up for my first official 10-mile race that following April in hopes to do my first half marathon shortly thereafter. Running a full marathon had been one of the very few things on my bucket list since I was a kid, and for the first time in my life I believed it was a true possibility. I was hooked, and there was no stopping me. I was a fighter, and I always accomplish whatever I set my mind to. 26.2, here I come.

Are you a “real runner”? These are stories written for runners, by runners. Email your story in 500 words or less with an accompanying photo to editorial@womensrunning.com to be considered!