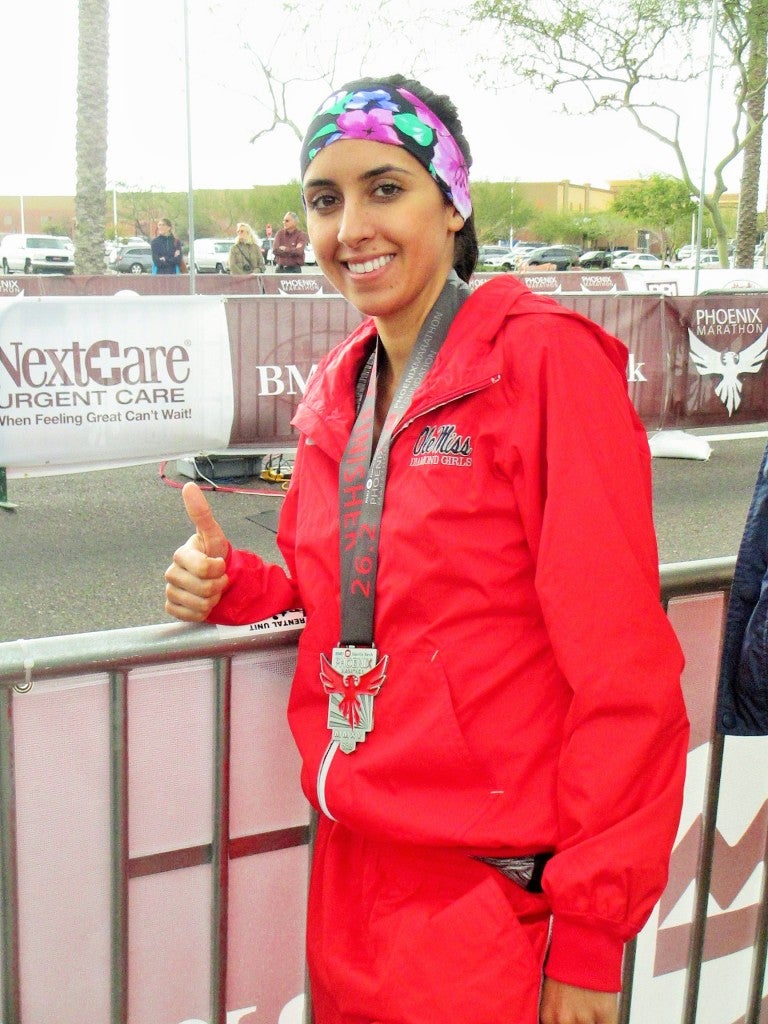 I am a lover of all things baked, gooey and chocolate—but healthy, natural and gluten-free, of course! I am an avid runner, a Yogi wannabe, blog enthusiast, and admirer of hiking and anything else that elevates heart rate while lowering blood pressure and stress.

I ran my first full marathon, the BMO Harris Bank Phoenix Marathon, in February 2014. I ran with a friend just for fun, so no one was more surprised than me when I finished just 6 minutes shy of qualifying for the Boston Marathon! Immediately after the race, I knew that I wanted to qualify for the Boston Marathon more than anything–but could not have guessed how my life would change forever. Five days after the marathon, my doctor handed me a diagnosis that finally made sense out of the laundry list of symptoms I had long been suffering from: Celiac Disease, an autoimmune disorder where the ingestion of gluten leads to damage of the small intestine. As relieved as I was to finally have a label slapped on this mysterious thing, I was also utterly devastated. Celiac Disease? What it that? I’d never heard of it, but it sounded bad. And very, very scary.

Fast forward nearly one year later. Training on a gluten-free diet for the 2015 Phoenix Marathon in February had been challenging at times. My stamina, along with my discipline and determination, was really put to the test just weeks before the run, when I was forced to eliminate 29 additional foods from an already restrictive diet. My doctor and I believed those foods were causing ongoing health issues for me. To further twist up my training and life, I was also diagnosed with Vulvodynia, a chronic pain and discomfort that affects the vulva in a small percentage of women. Turns out this condition is difficult to treat and, wouldn’t you know, running and exercise worsen the symptoms of burning and stimulate an urge to urinate frequently. “I just can’t catch a break!” I thought.

I suffered through a plethora of long and painful runs, stopping frequently to rest. As I sat on the edge of a curb one afternoon, I fantasized about what it felt like to be ‘normal,’ watching others run by with ease. I hardly remembered what that was like. Despite following a strict Paleo and gluten-free diet, along with exercising and meditating, I was still experiencing pain. That was frustrating. For these reasons, my running mantra shifted: I will run for those who can’t.

In the end, I chose to be thankful for everything that I did have, and the fact that I could still run. I told myself that, despite all of my food restrictions and pain, I would qualify—even if it killed me. And it felt all too real during the last 6 miles of the actual marathon when my Vulvodynia symptoms kicked in and proceeded to torture me to the point of almost quitting. But somehow, I found the strength to keep on running. I survived with only water to fuel me and qualified for the Boston Marathon with a time of 3:31, shaving ten minutes from my previous time the year before.

Running Was A Completely Different Experience 15 Years Ago