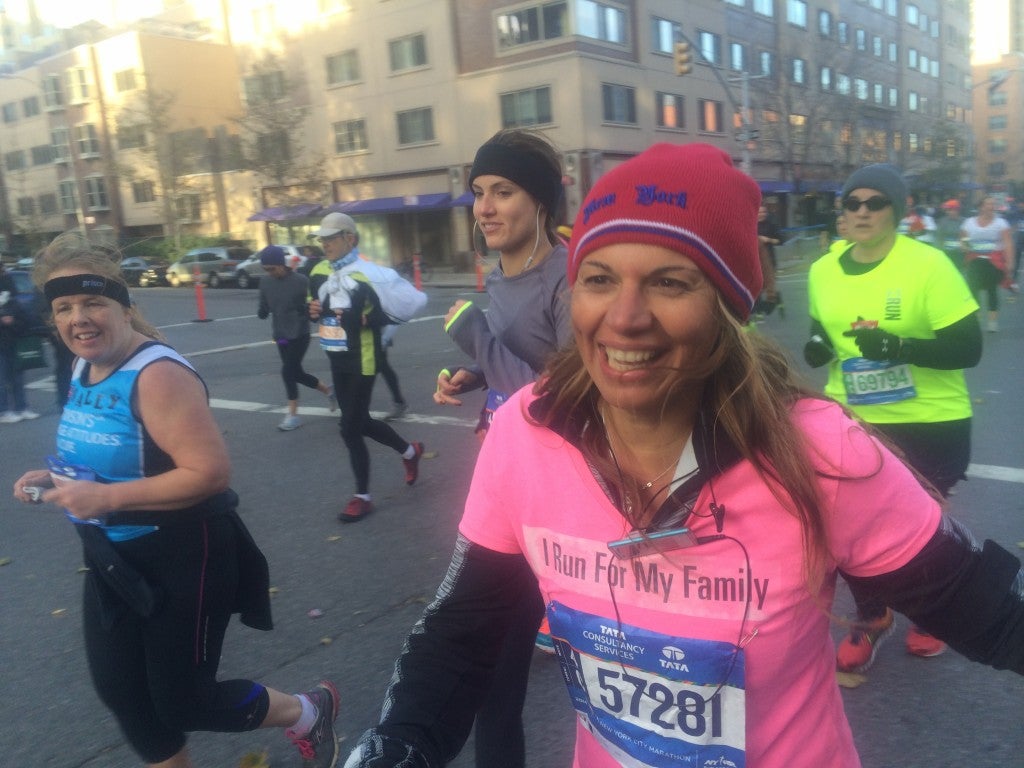 Dorith completed her first marathon with memories of her friends on her shoulders.

When I turned 44 years old, I looked at my life and panicked. I had lost my best friend to breast cancer—she never made it to forty. Leaving four small children behind, she made me swear to always watch over them when she was gone. In addition, my sister was diagnosed with MS, my brother has a severe case of epilepsy, my husband had a minor heart problem, my sister-in-law was also battling breast cancer, and her sister was fighting leukemia. I felt as though I was living a nightmare; everyone I loved was dealing with a health problem, and I was just waiting for my turn.

After spin class one day, my instructor, John, approached me and asked if I wanted to join his running club. I looked at him and I couldn’t stop laughing,

“Me? Running? I never ran a day in my life!” I said. I was overweight, asthmatic and didn’t “do” running.

“Everyone can run, and I will teach you. Are you ready for a challenge?” he asked me again. Right there, I knew it would be an opportunity of a lifetime. I committed the following week and asked John to coach me.

We started slowly as John walked me through all the basic components of running. He started to increase my distance and running time every week until I was able to run one mile, then a 5K—which sounded impossible at the time. We signed up for local cancer charity run that was in our neighborhood. Two weeks before, I almost quit, unsure if I could make it to the finish line. Two hours before the race, I was sweating, shaking, unable to calm down. I was praying for a storm. I didn’t feel ready. Then they sang the National Anthem and the gun went off—I was about to start running! And I not only started the race—but I also finished it and have since run several other 5K, 10K and half marathon events.

After a year of tackling various distances, I wanted to do more, and John suggested I should put my name in the drawing for the New York City Marathon. I thought he was crazy, but I did it anyway. At first, I felt it was a mistake—I didn’t think I deserved it. I remembered the people around me who weren’t able to do it and used that as fuel to get to the starting line. However, I injured my hamstring right before the race. Many people, including my coach, told me I shouldn’t do the race, but I didn’t listen. Instead, I started from scratch, running from the beginning with my mileage and slowly building back up as much as I could. I had to do it for my friend that never celebrated her 40th birthday. I had to do it for my friend who died in combat. I had to do it for my sister who fought every day for her life. I had to do it for my daughter who was struggling with depression. There were so many reasons. While my body fought against the training, my mind fought harder and ultimately got me to the starting line.

On November 2, 2014 at 7 a.m., it was me who was standing there on Staten Island, about to start my first marathon. It was me who would try to do the impossible. I started to cry uncontrollably, and I don’t remember anything other than so many people cheering us on after the gun went off. I thanked them over and over and listened to my coach’s advice: Just have fun.

I was flying until mile 22, when my hamstring and meniscus tear kicked in. I couldn’t bend my leg anymore, and my husband and I questioned if I was going to make it. People cheered me on and carried me the rest of the way, but the one I remember seeing was my coach, Jim, at mile 26.

Well, I made it across the finish line, and so did my friend who died in combat, my friend who passed away from cancer and all my loved ones who continue to struggle with surviving every day. We did it together, and it was the best thing I ever did for myself.

The Step I Took That Changed My Life Forever