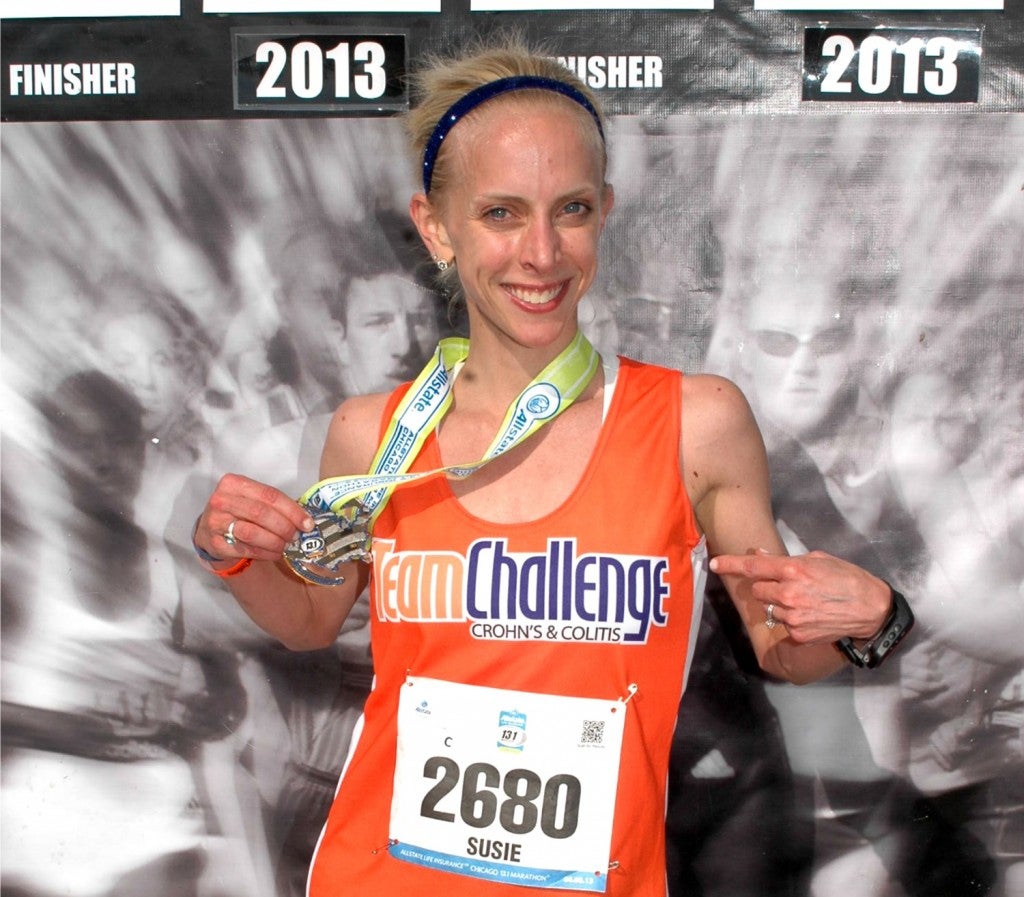 Susie Lemmer ran through her health complications to qualify for the 2016 Boston Marathon.

My name is Susie, and I am a runner, a yogi, a foodie, a daughter, a wife, and a former competitive horseback rider. I have a wicked sense of humor and a wildly creative sense of flavor. I also happen to have been dealing with a chronic digestive illness for nearly a decade and a half.

When I was diagnosed with Crohn’s Disease, a form of inflammatory bowel disease, in 2001, I had a doctor’s note to keep me from running in PE because we were worried that running would over-stress my body. Less than ten years later, running started to become my measuring stick for my health. It later became my defiance of the restrictions that I felt my body was trying to put on me, when, in 2008, I went into a major flare (one of many over the course of my disease). However, I kept running as much as I could. Even if I could just run for eight minutes, those eight minutes still meant that I was alive and could fight for myself, my life and everyone else out there dealing with their own battles (Crohn’s or otherwise). Making my battle part of a larger war gave me reason to keep moving forward through flare ups.

You know how fueling is a major part of running? Let’s say that it is a bit more complicated for those of us that run and have inflammatory bowel disease, a condition that attacks your digestive system frequently. The condition can cause diarrhea, vomiting and other side effects that make running difficult during a flare. Cue panic when trail restrooms are closed during the winter! This is why I carry tissues with me—they may or may not be for my nose. This is also the reason that I have never tried a Gu. I’ve learned what works for my body like every runner does; my body just may or may not tell me more vehemently and explosively than others.

Crohn’s flares and running injuries mean that for every mile, every minute, I am grateful. I am grateful for every step taken. That saying, “I run for those who can’t,” has been me in the past. But now (knock on wood), I am the one running to give others strength.

I started long distance running in 2012; a week out of graduate school, I completed my first half marathon with a pretty dang fast time. But I was terrified going into it. My body hadn’t cooperated for nearly a month prior to the race. I couldn’t go 9 miles without crippling over in gut pain, let alone 13.1 miles. I also hadn’t gone to the bathroom in a few days by the time of the race. So not only was it my first-race nerves, but also Crohn’s rearing its ugly head. But I survived and kept running with Team Challenge, an endurance program that raises money for the very organization that spends its time searching for a cure for this incurable disease.

Since that race in June of 2012, my life has changed in so many ways. Injuries have periodically paused my running, but the sport has always loomed on the horizon once I was better. And now, many half marathons and three full marathons later (including a Ragnar Relay, the Chicago Marathon, and the 2016 Boston Marathon after qualifying at the end of February in Phoenix), I still have those moments of thinking, Who am I? I’m a runner who has Crohn’s in the fine print until a cure deletes it.

Three Women Share How Running Affected Their Abilities To Conceive