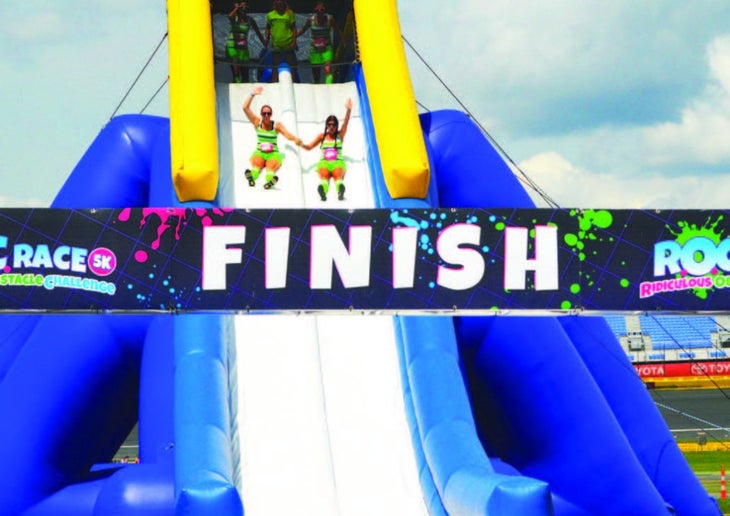 Mix up your racing season with super-fun races that buck tradition with spunky twists.

RADIANT RUN
You’ve painted your nails, maybe you’ve painted your house, but when was the last time you painted yourself? Runners start The Color Run wearing white but, with four color-explosion stations on each course, they cross the ﬁ nish line resembling a tie-dyed kaleidoscope. Once you’ve got your human canvas on, jam over to the post-race party to experience a sea of rainbow runners getting down.
WHEN: Multiple dates throughout 2014 and 2015
WHERE: Locations worldwide
thecolorrun.com

DIRTY WORK
Ready to step up your run? Flip into beast mode and take the Spartan Race challenge. Not for the faint of heart, this obstacle mud run tests your mental grit with boot camp–style challenges. Whether you choose the Sprint (3+ miles), Super (8+) or Beast (12+) distance event, getting to the ﬁ nish will be a dirty effort. You’re likely to crawl under barbed wire, over eight-foot walls and through ﬁ re pits before running through the ﬁ nish with a big, muddy grin.
WHEN: Multiple dates throughout 2014 and 2015
WHERE: Locations worldwide
spartan.com

RUNNING DEAD
If running alone doesn’t jump-start your heart, being chased by a pack of wild zombies might to do the trick! Straight out of a scene from “The Walking Dead,” grave dwellers go on the hunt for fresh-faced runners at the 5K Zombie Run. Strap on three ﬂ ags and protect your “life” as zombies try to steal your streamers. Score extra lives at hidden safe zones, where you can recharge to survive the apocalypse.
WHEN & WHERE: 11/08- Tampa, FL; Early 2015- St. Pete, FL
the5kzombierun.com

CITY SLEUTHS
Forget Carmen San Diego—where in the world are you? Scavenger hunt–loving runners will ﬁ nd out as they zip through a CitySolve Urban Race. This race challenges teams of runners (often in fun costumes of course) to get to the ﬁ nish line ﬁ rst by way of Amazing Race–style clues. Armed with the technology of your choice and a local map, teams must take a picture of each discovered location to prove their skills and nab the win.
WHEN: October 25
WHERE: San Antonio, TX
More Dates and locations to be announced for 2015
citysolveurbanrace.com

Three Next-Level Interval Workouts to Add to Your Weekly Routine

Inside the Mental Game of Elite Marathoners

The 5 Rules of Warming Up for a Run

After a Year of Big Changes, Colleen Quigley Will Make Her Season Steeple Debut at the Trials

Kim Conley Knows Anything Can Happen at the Olympic Trials