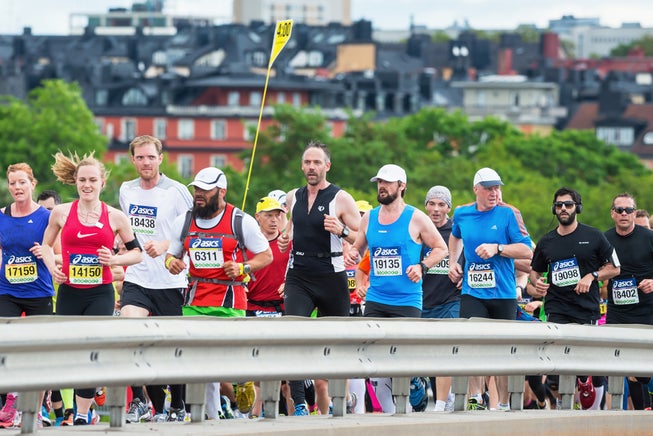 For some runners on race day, it’s about hitting a PR. For others, it’s about crossing the finish line for the first time. For race pacers, it’s about making sure you achieve whatever goal you set for that pace group.

These days, race pacers are a staple at most half marathons and marathons, holding a sign with a goal time above their head, pointing out the port-a-potty at mile 12 and helping you stay on target. But it’s not as easy as watching the clock, says Star Blackford, a 15-year-veteran pace team leader for Clif Bar Pace Team.

Related: What It Is Like To Lead A Half Marathon Pace Group

So how do the best pacers get the job done?

Know the pace for the pace group

A good pacer won’t just show up on race day and expect to run the planned pace, Blackford says.

“Newer pacers I really recommended going out and practicing 3 to 5 miles pacing and really learning what that feels like,” she says. “It’s a little more complicated than just slowing down.”

It doesn’t mean you have to specialize in a specific area at your day job to be a pacer. Jim Crist, owner of MarathonPacing.com, says that his pacers have a range of jobs. One is a librarian. Another is a truck driver.

“Some pacers are good at math, and some are English majors and can barely count to 26,” he says. “Whether you’re good at math, everyone has targets for each and every mile, so if you get off, you make those small adjustments every mile.

“The one thing we all have in common is we just want to be supportive of people,” he adds.

Related: Mile Posts: Should You Run With A Pace Group?

Be encouraging to the pace group

Crist says the first part of the race is about making sure runners stay properly hydrated and fueled. With the excitement of race day, many runners may not be paying attention to those needs.

“As people start to falter, especially in the second half of the race, pacers start to focus on encouraging people,” Crist says.

“As they are approaching hills or getting farther in the race, runners are getting foggy, so we’re making sure people in that group are getting the right advice. At this point, it’s a lot more than just pointing out water stations.”

It’s not your race…it’s for the pace group

Pacers have to keep a balance of sharing their experiences while keeping race day about the runners.

“You’re going to have be respectful of the people you’re running with,” Blackford says. “I want to keep the focus on them and what they’re trying to do.”

While anyone can wear a watch that beeps at him or her, Blackford says that a pacer has to be more than that.

“People say, ‘My GPS watch can pace,’ but the GPS can’t talk to you,” Blackford says. “It can’t encourage you when you hit the wall at mile 20. That’s what pacers do, when all your GPS is going to do is tell you that you’ve fallen off.”

Stay engaged with your pace group

Pacers offer ranges for runners of all levels from about 3 hours in the full marathon to about a 5:30 finishing time.

“We’re helping people get to Boston for the first time. We’re convincing people that they can do something they didn’t think they could do that morning,” she says.

“As pacers, we’re the metronome, but we’re also getting people out of the negative thought zone. We often think we’re not good enough or can’t break 4 hours and then you get in a pace group and we hold you on point and it ends up getting done.”

For Crist and his team, that’s the best part. “Seeing the runners that are with you achieve the goals they want to do— it’s really satisfying to see them cross that finish line,” he explains.

Blackford said she’s thankful for the chance to help runners achieve their goals.

“I think about the confidence running has given me, and when I’m able to share those experiences with runners and see them get to the finish line in a time they didn’t believe was possible, and I may have had a small part of that, then for me, that’s a real honor and privilege.”