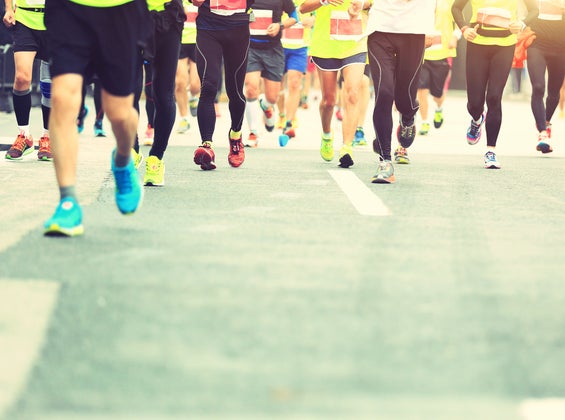 People love to race. And they love to race together. The reigning king of big events in the U.S. in 2015 was the Peachtree Road Race in Atlanta with almost 55,000 finishers. That’s enough racers to stand shoulder-to-shoulder, single file from the starting line to the finish line of the 10K event, back to the start and then out again to the halfway mark.

Other big events like the Chicago Marathon are lined with spectators and packed with friends you haven’t met yet. Even if you’re not running with a buddy, there’s a good chance you’ll meet one in the tens of thousands of runners. In the past, participants have gotten married during the race, counting the other 37,000 people as wedding guests. In addition to the possibility of nuptials, events like Chicago have loads of amenities for finishers, including VIP packages that ensure post-race massages, special pre- and post-race meals and private bag checks.

Tyler McCandless, a pro runner and two-time U.S. Marathon Olympic Trials qualifier is an expert on races of all sizes. McCandless says the crowds of spectators can be one of the biggest advantages to big city events. “I remember distinctly at mile 16, it was the first time I could hear my feet hitting the ground when we finally got to an area of minimal spectators,” McCandless says of his experience running the Chicago Marathon. “There’s more ‘hype’ and simply more people, so the anticipation and excitement are much bigger. It certainly helps to feed off of the crowds.”

RELATED: How To Show Appreciation For The Towns And Cities Hosting Races

There can also be a downside to that much energy. “After about an hour, having big crowds and lots of cheering can make executing a race plan difficult,” McCandless says. “It’s hard to keep adrenaline in check. It’s also something you can’t practice in practice.”

Logistics can also be an issue. “There’s more planning required to have a good experience at a big race. You can’t show up just before the start and expect to find parking,” he says. “Similarly, you can’t expect to get into any restaurant that’s in the main area of the race start or finish.”

On the other end of the spectrum are events like the Running With The Bears Marathon in Greenville, Calif., one of the smallest Boston qualifiers in the U.S. that boasts only 93 finishers in 2015 (last year race officials limited entries to 300 people). Still too crowded? Try the Turtle Marathon in Roswell, N.M., with only 13 finishers in 2015.

A behemoth in comparison, McCandless’ favorite little race is the Kauai Marathon, a small event on the small Hawaiian island of Kauai with roughly 250 finishers last year. It could be that he loves it because he’s won the event’s full marathon three times and its half marathon twice, but according to McCandless it has more to do with local turnout. “With the Aloha spirit and the community support, you feel like you know every competitor, every neighbor and every race organizer,” he says.

Don’t be surprised if pro runners get more involved at small races, too. “Last year I volunteered to run in a chicken suit before the Keiki (kids) races,” McCandless says. “I ran six races on this beautiful grass area—it was 80 degrees and the suit was so hot my rubber ‘beak’ kept filling with sweat. But my fiancée stood by and gave me Pedialyte from a bottle between races. Nearly 200 kids race the races, and the experience was incredible!”

RELATED: How To Nail Two Big Races In One Season

Whether you’re more of big crowd runner or enjoy the small-time scene like McCandless, there’s a race for everyone. Here’s what to expect with each race size:

New York City Marathon: According to the Association of International Marathons and Distance Races, New York was the largest marathon in the world last year with just over 49,000 participants. Nothing beats the thrill of crossing the Verrazano Bridge and seeing the first throng of spectators along Fourth Avenue, and there’s always big time bragging rights when you say, “I ran New York.”

Napa Valley Marathon: With only 1,700 finishers in 2016, the Napa Valley Marathon in Northern California’s wine country is about as far away from New York City as one can get. A notoriously spectator-unfriendly course ensures peace and quiet for much of the 26.2 miles, but the beautiful sights along Napa’s famous vineyards guarantees plenty to think about. Special touches include a duffel bag in lieu of a plastic throwaway. And of course, there’s wine.

AK Salmon Run Marathon: With only 18 finishers in 2016, the AK Salmon Run is the definition of isolation. Held in Cordova, Alaska—an area with only air or sea access—the event epitomizes independence. Water stations? Sort of. According to race officials, water is “cached” along the course. Entry fee? Fifty bucks. There’s no cattle call to wade through when the gun goes off—everyone gets a spot on the starting line. In the event’s early years, each runner was assigned a follow vehicle to ward off possible bear or moose encounters. Fortunately, there hasn’t been a need yet.