Three years, five marathons and a few thousand miles; that’s how long it took me before I found the courage to work on my negative body image.

As a new runner, I always felt insecure when I looked at the covers of health and fitness magazines. Month after month, I’d see the same strong and slender women looking happy and confident to be working out in their sports bras. But I didn’t look like them. I rarely saw my body shape represented and when I did, she always had her shirt on.

And I totally get it. There was a time when I wouldn’t be caught dead rocking a sports bra for all the world to see my stretch marks, cellulite, love handles and rolls. The problem was, I assumed that the more I ran, the more I’d look like those slender girls proudly working out in their sports bras.

So I ran my first marathon and a year later I ran my second. Then the following year, I ran three more and broke 4 hours for the first time. The more I ran, the more confident I felt. I stopped explaining to people that I wasn’t “really” a runner. I stopped feeling insecure about my pace. I was having the time of my life running, racing and finding my voice in the running community.

But despite the fact that I was working my ass off and having a ball doing it, my stereotypical runner’s body never materialized. I’d logged thousands of miles and yet I was still a 160-pound U.S. size 8/10. I’d put on shorts and a sports bra, look in the mirror, and convince myself that my body wasn’t a body that should be seen in a sports bra.

I was frustrated. I realized that I was attaching shame to the body that I’d worked really, really hard for. So one steamy New York City summer day when I set out to run 15 fast and painful miles, I told myself enough was enough. I wasn’t going to to wait for my perfect runner’s body any longer. So I shed my shirt, the #SportsBraSquad was born—and instantly my life changed.

It took months before I stopped feeling self conscious rocking a sports bra but I just kept telling myself, Fake it until you become it. When I found myself in a spin class, riding next to a Victoria’s Secret model and feeling insecure about my heavier frame, I’d shed my shirt, kick ass in class, and reinforce my newfound confidence. Runners who looked like me, also rocking their sports bras, would scream, “Sports bra squad!” at me. I found a community of women who felt like I did and we became stronger together.

Becoming a member of the #SportsBraSquad became a hell of a lot more than a way to stay cool. It helped me combat the decades I’d spent developing a negative body image. Stepping out of my comfort zone brought me back to reality whenever my confidence wavered.

But rocking a sports bra when you know you’re working your ass off to be in the best shape of your life is a hell of a lot easier than doing it when you’re just getting started.

This is a picture of me in November of 2016 during the New York City Marathon, the result of seven months of hard work. 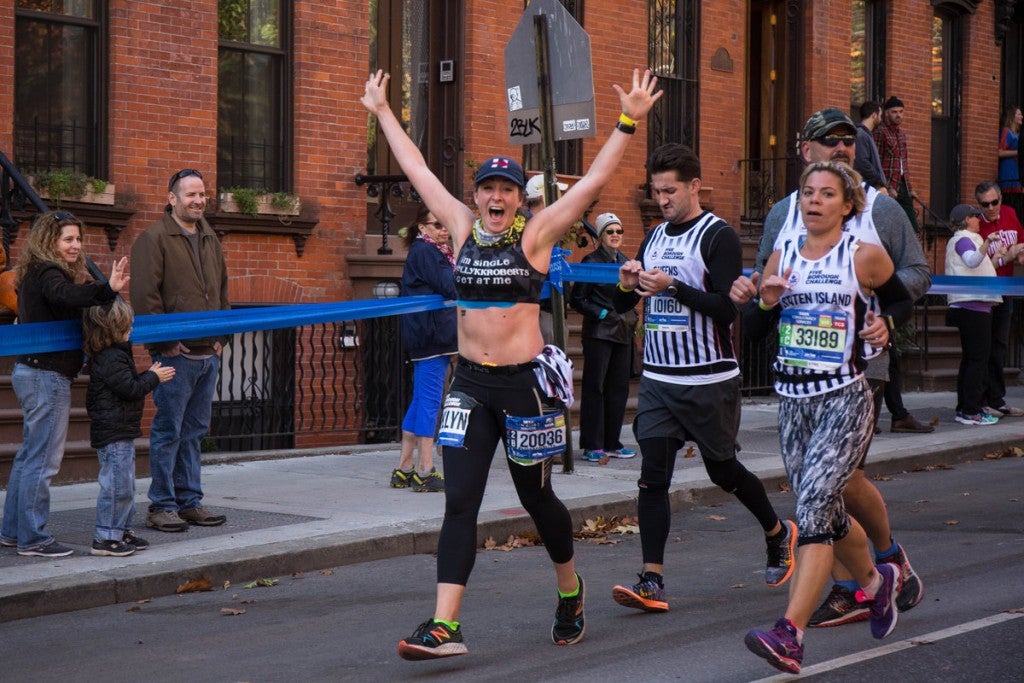 But fast forward two months and here I am in my post-holiday splendor. 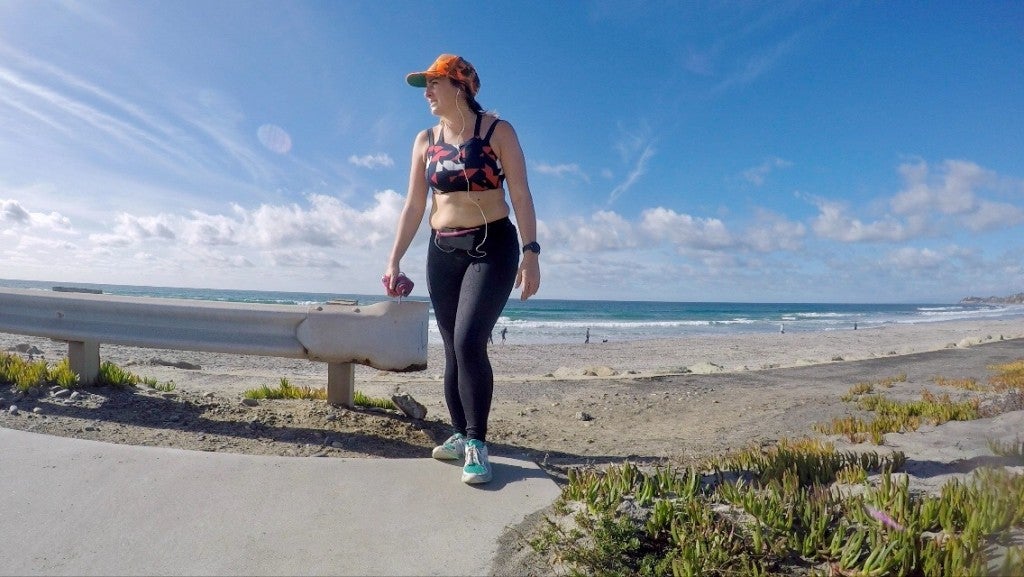 Running in my sports bra taught me how important it is to consistently work on my self confidence. It really isn’t about how you look, it’s about how you feel. It’s about feeling grateful for what you can do and using that as motivation to work toward a stronger tomorrow.

The next time you’re feeling self conscious about how you look, remember to acknowledge the parts of you that make you feel strong and confident as well. A little positive self talk every single day goes a long way. Build yourself up. Believe in yourself. Head up, wings out.