A lot has changed since I first started running but one thing that’s stayed consistent is my lack of running confidence. It’s intimidating to admit just how many times I’ve stopped and doubted myself or my ability to run a certain distance at a certain pace. I used to have an arsenal of excuses not to commit to a goal so that if I failed or fell short, I wouldn’t feel disappointed in myself. But turns out that foolproof plan isn’t all it’s cracked out to be! Truth is, when I gave myself an excuse to fail, I set myself up for failure. I wanted to share 7 moments that helped me remember that I’m capable of so much more than I give myself credit for and helped to develop my running confidence.

1. The first time I ran 3 miles without stopping to walk. 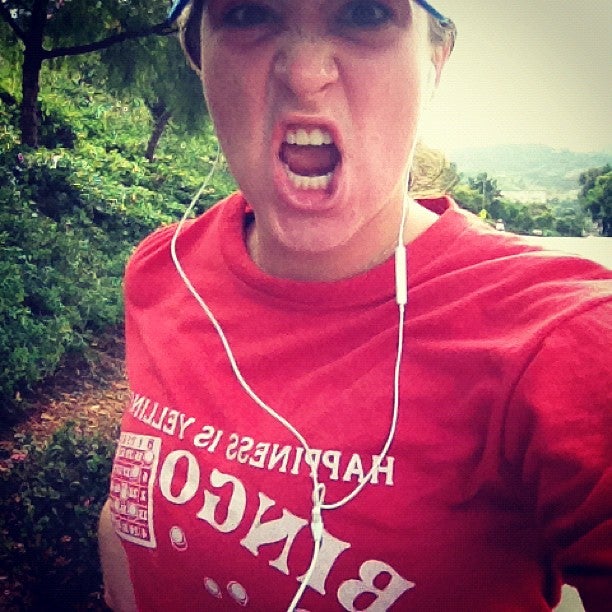 I will never forget the first time I ran 3 miles without stopping. That morning, I saw on my Runkeeper app that my workout was to run 3 miles and I spent the entire day stressing about how far 3 miles was. But that night, I decided to see if I can do it and I survived. I was so stunned and proud of myself that I told anyone and everyone who would listen that I ran 3 miles without stopping. It was the first time that I kind of felt like a runner. 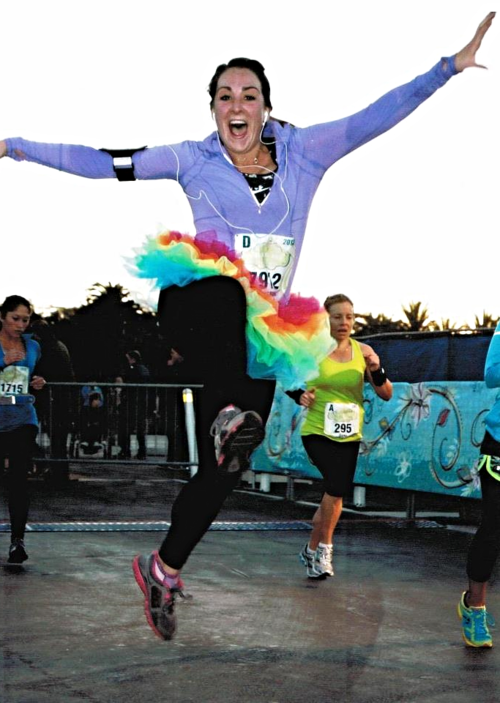 I’ve never experienced doubt like I did during my first half marathon. I was wildly unprepared and around mile 10, I started coming up with excuses to walk off the course. “It’s okay, you weren’t ready. Making it this far is an accomplishment. It’s okay to stop.” I started saying to myself. Then, miraculously, a woman came up to me and asked if we could run together and it’s because of her support that I didn’t quit my first half marathon. Finishing that race was one of the proudest moments of my life because I had done something that I didn’t believe I was capable of. 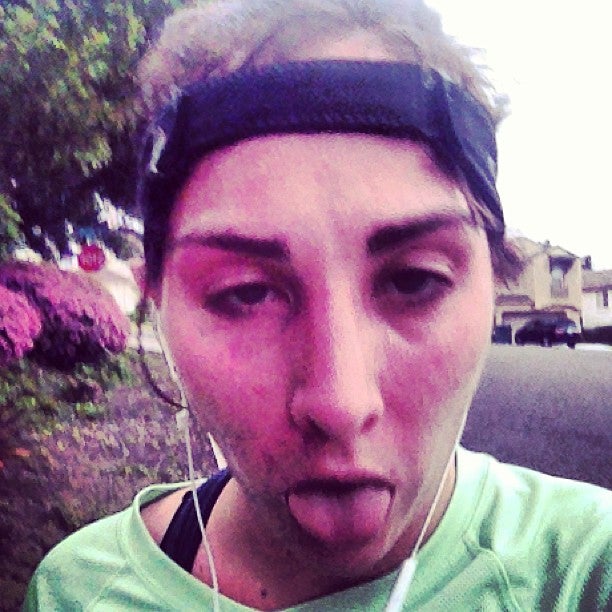 I cannot describe how terrified I was before my first 15-mile long run. I took off and about 9 miles in, my legs felt like lead and I wanted to stop. I decided that it just wasn’t my day so I turned around to start to go home. Around mile 11, I went inside, took my shoes off, and sat down on the couch defeated. But instead of giving up completely, I told myself that even if I walked those final 4 miles, I couldn’t quit. So I put my shoes back on and finished running the final 4 miles. I always hear people say that quitting is the easier option but anyone who knows what it feels like to walk away knows how devastating the disappointment can be. Giving up is never the easier option. I realized that once I started pushing myself not to quit when running got uncomfortable. 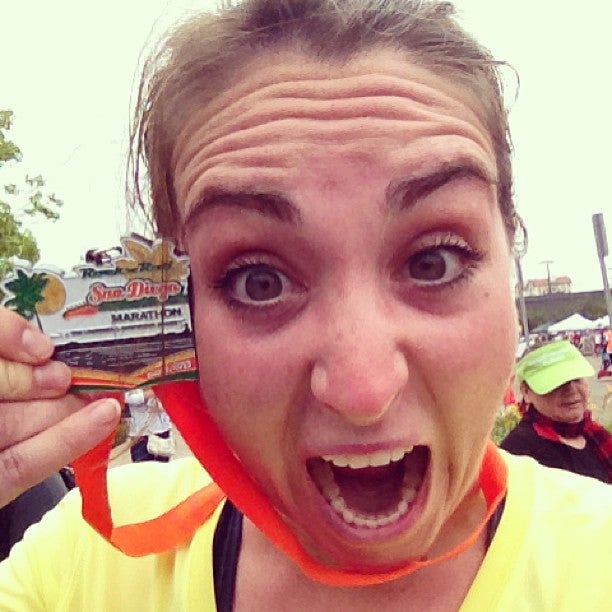 My first marathon was one of the scariest, most painful and yet happiest days of my life. I was convinced I wouldn’t be able to finish and I had a meltdown at mile 13, but I didn’t give up. Running a marathon isn’t impossible, it just was really hard. I realized that I’m quick to define what I’m capable of and holding myself back because a goal is intimidating doesn’t serve me. The only way I can fail is if I fail to try.

It took me about a month of going to a track with a group of friends before I actually decided to partake in a track workout. While my friends attacked intervals and worked on their form, I would watch from the outside lap running at an easy conversational pace. Then one day, my friend Chloe convinced me to just try the workout. I took off way too fast but I ended up running one of the fastest miles I had run since elementary school and that sense of accomplishment completely overshadowed the pain.

6. Breaking 4 hours in the marathon. 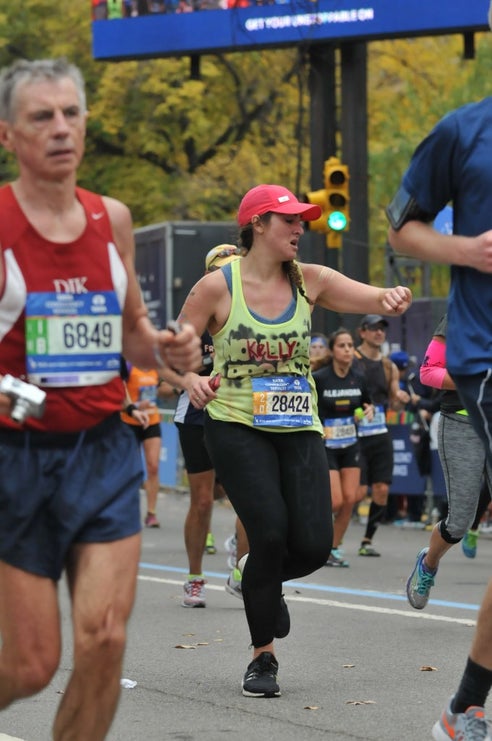 A lesson in running confidence all its own, I struggled to commit to wanting to break 4 hours in the marathon. I had trained harder than I had ever trained before, I knew I was ready, but I also thought that if I didn’t commit, I would have an out if it didn’t happen. Then at the Berlin Marathon, I finished 3 minutes and 12 seconds off from my goal and I felt disappointed in myself. I couldn’t believe that I felt disappointed. I had just run a marathon! That was an accomplishment all it’s own! But I realized that I really wanted that 4 hour marathon.

Then, one month later, I unsurprisingly still couldn’t bring myself to commit to breaking 4 hours during the New York City Marathon. “This course is much harder” I remember thinking. “Go for it next year, just have fun this time”. (Again with the excuses!) But around mile 13, I realized I was on track for a sub-4 hour marathon and I decided to go for it. Coming in at 3 hours, 59 minutes, 37 seconds helped me realize that my running confidence needed a lot of work. I had to start believing in myself if I wanted to get the most out of running.

Last but not least, I struggle when I see a certain pace on paper. This year, I’ve made a goal to try and qualify for the Boston Marathon during this year’s Chicago Marathon. That means I have to shave 28 minutes off of my marathon time over the next 6 months. Whenever my coach Josh Maio puts 7:45, 7:15, or terrifying 6:45 minute miles on my training plan, I panic. I find myself saying, “I can’t run a 7-minute mile!” Despite the fact that I know that it’s possible and that it just isn’t easy. Now instead of saying “can’t”, I’m trying to say “why not!” and that small change has made a huge difference.

Even after two and a half years of breaking through barriers and proving to myself that with enough hard work, I’m capable of so much more than I give myself credit for, my running confidence still needs a lot of work! But when it comes to running and running goals, you need to have patience, persistence, and perseverance because falling short or even crashing and burning is inevitable. You just have to ask yourself what’s at stake. The only way you’ll fail is if you fail to try (and then try, try, and try again when it doesn’t happen the first, second or third times). Just remember to find the balance between putting in really hard work and having fun because you can have both! Until next time, #RunSelfieRepeat.