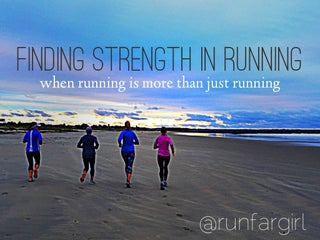 When I first started running as a 20-something college student years ago, it was all about my weight. Running was just another way to burn calories. I never could have imagined that running would become a central part of my life, not just as a daily activity but the way in which I’ve made connections and established friendships.

I spent this past weekend at an all-women’s running retreat in Maine, Rise.Run.Retreat. And during that weekend I learned that for many of us running is so much MORE than just running.

For me, running showed me that I was strong enough to make what seemed impossible a reality. When I ran my first marathon I crossed the finish line amazed at my accomplishment. I did something I never thought I could do.

Years later the experience of running Hood to Coast, a 200 mile relay race in Oregon, with a group of inspirational women opened me up to a whole new experience: the power of the running community. In that relay I ran harder than I ever thought I could, cheered on by the women on my team who believed in me when I felt doubt.

Get More Inspiration From Run Far Girl:
5 Reasons To Volunteer At A Race
Why My Scale Is Challenging My Patience

How to Run Faster: 6 Winter Training Tips for a Speedy Spring and Summer