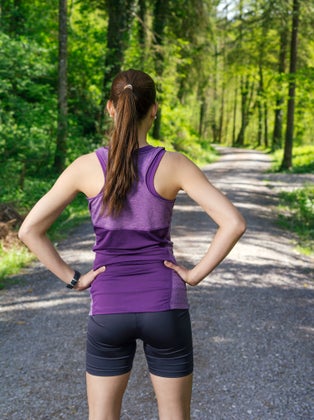 As you stand on the start line, dozens of questions go through your head. Will I achieve my goals? Did I train hard enough? Am I wearing the right clothes for the weather?

You’re not alone. Every person at a start line has different mental games they play to stay focused, pumped up, and confident.

“Everybody knows they’re supposed to be confident,” said Dr. Alan Goldberg, a sports psychologist and director of Competitive Advantage. The only problem, he said, is that it’s not that easy. “You can’t just tell yourself to be confident.”

Time and again, studies have found that confidence is one of the most important tools in an athlete’s arsenal. The more you believe that you will run fast, the more likely you are to run fast.

“The most consistent finding in sport psychology research is the direct correlation between high levels of sport confidence and successful sporting performance,” said Dr. Kate Hays, a sports psychologist with the English Institute of Sport and who has worked with a number of Olympic and world-class athletes.

When Hays and her colleagues interviewed top-level athletes, they found that what was important was where the confidence came from.

“An athlete that bases their confidence entirely on winning will suffer a confidence knock when they do not win,” Hays said. “Thus, it is important for athletes to derive confidence from several sources in order to make it more robust.”

Often, real self-confidence came when the athletes focused on themselves and their processes and their goals — as opposed to worrying about things outside their control. The best antidote is to build confidence through training and preparation, which helps you hone your goals.

Race goals, therefore, should be process- and performance-based. For example, Hays said an 800m athlete might make it a goal to get in a good position for the first 200m, run a specific pace in the middle, and focus on the sprint in the last 200m.

“They will want to win, and that might well be the goal that motivates them, but having a goal to win will not help them run the race,” Hays said.

In the study, the athletes typically struggled with confidence after poor performances, poor preparation and training, injury, or from psychological factors such as a coach putting them down.

Too much self-confidence, which can simply become arrogance, can also be counter-productive, especially if it makes you go out too fast or overestimate your abilities. Studies have found that stock traders will often experience a boost in confidence after good stock performances, leading to increases in testosterone. But high levels of testosterone have been linked to increases in risk-taking and, often, poor stock performance in the long run.

“It is really hard to say how much is too much confidence, or what is just the right amount,” said Deborah Feltz, a Ph.D. in the Department of Kinesiology at Michigan State University.

Some doubts and stress can be good motivators to push you to train toward your race or your goal, just as some tough days can make you stronger — mentally and physically. That, therefore, builds your confidence and helps you construct attainable goals.

“However, when the actual competition is about to occur, you don’t want to have any doubts about meeting the goals that you set for yourself,” Feltz said.

While confidence may be important, it can’t be forced. It is a result of everything else that you’re doing.

What about all that positive self-talk you’ve been trying to engage in during races?

You’ll never be able to stop yourself from thinking negative thoughts. And then it turns into a cycle: a negative thought, followed by a positive self-talk pushing it down. “It’s a waste of energy,” Goldberg added.

“There is a huge difference between being confident and being positive,” Hays said. Positive self-talk is only useful if it’s accurate and based on what you have actually done and what your goals are for the race (remember: goals should be process-driven, not result-oriented).

Instead, it’s important to focus on the process and the feel of running. Don’t think, Goldberg said, feel. Because of how our brains work, thinking too hard — even thinking about your stride or your arm position — puts you in the wrong part of your brain. Feeling — letting your shoulders loosen, unclenching your fists, feeling your stride — puts you in the right part of the brain. Then you’ll be in the zone.

“You can’t be confident,” Goldberg said. “You can feel confident.”

360 YOU: How to Unlock Your Potential and Level Up