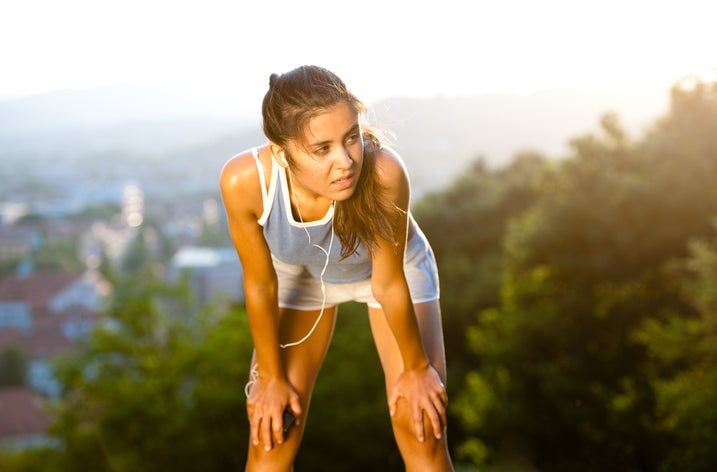 It’s the runner’s biggest question and worst fear: how quickly can I get out of shape? After putting in hours of training and hundreds of miles, most athletes worry it will all go to waste if they stop.

Unfortunately, plenty of hard-earned fitness can go away within two weeks. Most studies suggest that an athlete’s VO2 max, the maximum oxygen he or she can uptake and utilize, plunges in the first month of inactivity, according to Dr. Edward Coyle, the director of the Human Performance Lab at the University of Texas at Austin. VO2 max continues to decrease, albeit at a slower rate, for the first three months after ceasing activity. In highly-trained athletes, VO2 max decreases by 7 percent in the 12 to 21 days after stopping training and another 9 percent during days 21 to 84. In athletes who have trained for a few months, and increased their VO2 max with exercise, those changes are completely reversed with several months of not training.

“It’s all about supply and demand. If you stop running, you take away the demand,” said Jason Karp, a coach and author of Running a Marathon for Dummies.

All the biological systems that come into play when we run are closely connected, so while VO2 max might be one of the most noticeable and important changes, it’s not the only one. Blood volume also rapidly decreases, which affects oxygen uptake. Mitochondrial density, lactate threshold, and the ability to oxidize fat stores all decrease. Even the enzymes involved in metabolizing energy decline and become less active.

“What really changes is the ability to consume and process oxygen,” said Karp.

RELATED: Stay In Shape When You’re Not Training For A Race

After endurance and cardiovascular abilities take a big hit initially, muscle mass and strength also begin to atrophy. In practice, runners often notice that while endurance capabilities go first, it can be possible to hang on to some speed for longer.

Now, the good and bad news: all this depends on the individual.

Ann Alyanak, who won the 2011 Columbus Marathon and was the 2002 Big Ten champion in the 10,000m, sees a wide variety of detraining effects with her athletes, particularly when she was coaching college. Some athletes would be fine after a week or two of not running and other athletes would lose fitness in that same time frame.

How quickly that happens can also depend on where an athlete is at in training. “If you’re at peak fitness, then it goes really fast,” Alyanak said, often because you’re already tapering. “You’re holding onto it anyway, at the end of the rope.”

And, if you’ve been training for a long time, then you can maintain some fitness longer. Long-term athletes are often in a better position than those who have been running or working out for a shorter period of time. That can be true even after months of inactivity.

“If you’ve done it in the past, it’ll come back faster,” said Alyanak.

Elite athletes or those who have trained consistently for upwards of 10 years may see more rapid decline initially than people who haven’t been exercising as long. The elite athletes simply have further to fall. But highly-trained athletes don’t decline to the same levels as less-trained individuals, even after three months of no activity — and, in most measures, they certainly don’t decline to the level of people who have never exercised.

“Endurance athletes, however, do not regress to the levels displayed by individuals who have never trained,” wrote Coyle in a scholarly review of the topic.

If getting back in shape after taking time off, whether for injury or a mental break, seems like it takes far longer than getting out of shape, that’s not just your perception.

“It takes at least twice as long, if not longer, to gain fitness as to lose fitness,” said Karp. “It takes much, much longer to build a house than to knock it down.”

Many of your systems have to be built back up from the cellular level, synthesizing protein and increasing the number of mitochondria. The half-line of decline in mitochondrial enzyme is 12 days, which means 12 days of detraining requires 36 days of re-training to return to the same levels, according to Coyle.

Much, if not all, of the decline in fitness can be alleviated, though, through cross-training and through shorter intense efforts. If the intensity is kept up two or three times a week, then the overall training volume can decline without extreme decreases in fitness. When athletes taper before races this is exactly what they’re doing: maintaining fitness through short, hard efforts, but allowing their bodies to rest with less overall training volume.

“You don’t need as much of a training load to maintain fitness,” said Karp.

Losing fitness is not a reason, however, to not take a needed break — a fear Alyanak says pushes too many athletes not to rest. A yearly offseason is important for physical and mental health and can allow an athlete to come back stronger. Rest periods for injury or illness, particularly if they allow some cross-training, are far better than poor training and hurting yourself.

“You’re not going to get out of shape in a few days,” said Alyanak.

Kelly Dunleavy O’Mara is a journalist/reporter and former professional triathlete. She lives in the San Francisco Bay Area and writes for a number of magazines, newspapers, and websites. You can read more about her at www.sunnyrunning.com.