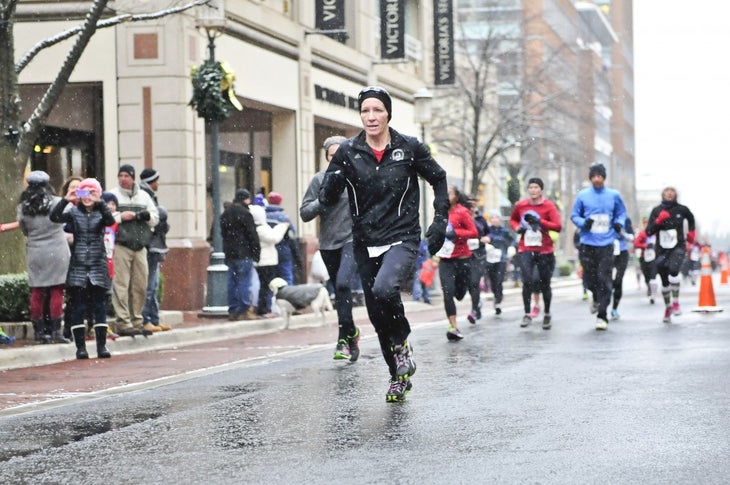 I’ve had a number of questions about how to keep running strong as a master’s runner. Since I’m a few years shy of forty, I thought I’d pick the brain of one of the fastest (and nicest) master’s runners I have the pleasure of knowing. Read on to get to know Deb, a personal trainer, coach and all around amazing local DC mother runner.

Tell us a little bit about your running history.

Deb: I started running track when I was in eighth grade, and immediately fell in love with the sport. Cross-country wasn’t an option at my school, so it wasn’t until college when I started running slightly longer distances for fitness. I realized how relaxing and therapeutic it can be.

I ran pretty consistently for fitness—but without high mileage—until my late thirties when I decided to run my first marathon. I trained for the marathon distance and almost exclusively ran marathon races for many years before focusing on shorter distances more recently.

How did becoming a fitness professional change your view of running?

Being a fitness professional helped me to fully understand the importance of cross-training. I have always enjoyed strength training and feel that’s been one of the things that has made me successful with my running. A strong body doesn’t tire out as quickly, and that’s especially important in the later stages of the marathon.

Some people view running as the cardio component of a well-rounded fitness routine; however I learned very quickly that not every person enjoys running as much as I do. If someone tells me that they don’t like to run, I don’t force it into their workout routine and instead have them cycle, row, swim, etc. I feel it’s important to have them do something they enjoy so they will stick with it.

Related: Does Cross-Training Make You A Stronger Runner

Has running changed for you now that you are a masters level runner?

I’ve always said that if you run long enough and can stay injury-free, you will become more successful with every age group you move into. Last season was my most successful ever. I trained harder than I had in years, and with each age group place or win, it made me want to work that much harder for my next race.

An injury in 2012 has prevented me from continuing to run the marathon, but I’ve embraced the shorter distances as a result, such as half marathon and shorter. I never thought that I could be competitive in the 5K or that I would even enjoy it as much as I have.

As you’ve moved up in age groups, what has been one of the most important things to keep you running and healthy?

Weight training has been an absolutely integral part of keeping me strong and on the running trails. Core exercises, regular stretching, and foam rolling also help round out my training program. Additionally, as I get older, hydrating and eating well becomes more important for injury prevention and results.

During my years of running, I feel like I’ve gotten a good handle on all distances from 5K’s to ultras, but certainly enjoy running some distances more than others. I have run one 50-mile ultramarathon, forty marathons, nine half marathons, fifteen ten-milers, eight 10K’s, sixteen 5K’s, and an assortment of other distances under my belt. I’ve qualified for Boston twenty times and I have run it twice.

Additionally, I am a Road Runners Club of America (RRCA) Certified Running Coach and have coached runners since 1998, specializing in the marathon and half marathon distances.