I’ve always hated wearing a fuel belt while running. They bounce around, they’re awkward. They’re just THERE. I’ve also had this (unsubstantiated) thought that wearing a fuel belt somehow compromised my runner safety. Like it screams “Hey! I’m going to be out here for a LONG time.” Almost inviting a potential attacker to follow me.

Maybe I feel that way because 95 percent of my runs start in the early hours of the morning—even on the weekends. Rarely do I run during the day. So for half the year, when winter settles in, I’m running alone and in the dark with a fuel belt. Safety is often on my mind, but this summer when attacks on several female runners made national news, it shook me out of the relative “safety” I’d been enjoying with early summer sunrises and made me think twice. Was I really doing all I could to be safe?

It has been years since I had taken a self-defense class and I knew it was time. Plus I had this burning question for whoever was going to teach the class: Does what I wear affect becoming a target? 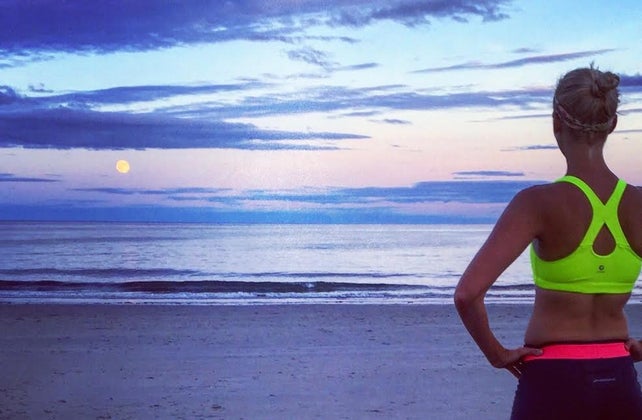 Searching For The Runner Safety Answer

Maybe my fuel belt notion is silly, or maybe it’s substantiated. And what about those times in the winter when I choose not to wear pink and tuck my long blond hair into my hat so I look more like a man? Does that help me? Or in the summer—especially this summer—when it’s so hot that all I want to run in is a sports bra and shorts. Does that increase the likelihood of being attacked?

I had so many questions, so when I attended the RUNSAFER clinic put on by two-time Olympian Todd Williams, I knew I had to find a chance to get his opinion. Williams has taken his experience as a seasoned runner and paired it with his black belt in Brazilian Jiu Jitsu to create a free running safety clinic. he travels the country teaching runners how to stay safe on the run and defend themselves in case of an attack.

His informative clinic outlined safety tips, some of which I’d never heard, like to yell out the name of a friend when being approached or attacked to create doubt in the attacker’s mind that maybe you aren’t alone. He also demonstrated defense techniques for several different scenarios, each time emphasizing that practice will increase your chances of survival.

After the clinic finished I had the chance to ask him, “So does wearing just a sports bra and shorts out on a run make a difference in becoming a potential target?”

He smiled and hesitated, “That’s a tough one to answer. It’s a sensitive topic.”

“I know,” I said, realizing my loaded questions touches on more than just safety.

“Look, I’ve got two teenage daughters and when they head out for a run in a jog bra and those tight capris…,” he shook his head like any good dad who is worried about the safety of his daughters would.

But Especially, What About The Sports Bra?

We agreed that wearing headphones increases your risk and takes seconds off your “safety clock.” An analogy Williams alluded to in his presentation was, if you’re in a situation where you are being attacked, your goal is to create for yourself precious seconds that will allow you to escape. Developing self-defense techniques can add to your ‘safety clock,’  he said. Making smart choices about headphones or even how you wear your hair can potential reduce your risk of being attacked.

But what about a sports bra? Wearing a sports bra out on a hot summer run is a relatively new thing for me, for the longest time I didn’t simply because I felt self-conscious about my appearance. This past summer I chose to ditch my shirt on those super hot and humid days almost as an act of defiance against that voice inside me that told me I wasn’t “good enough.”

After the news of the attacks on two joggers surfaced I found myself asking the questions, If I wear a a sports bra, will it affect my safety? And if wearing just a sports bra and short turns my husband’s head when I walk through our kitchen, then what is an attacker thinking? I don’t wear a sports bra and shorts to turn heads; I wear it because when I do I feel strong, confident and fast. It’s all the things that running makes me feel, times ten. And my fuel belt is a normal piece of my gear—I like to wear it on short runs too.

Why I Choose The Sports Bra

And if this is true of a sports bra on a run, then wouldn’t it also be true of a mini-skirt in a parking garage? Why is it that, as a woman, when I choose to wear something that makes me feel confident or pretty or beautiful, it puts me at risk? And not just at risk for being attacked, but at risk for being blamed for the attack. Do I stand up against the culture or do I need to rethink my choices in light of the current culture? And what good are my opinions if I’m in a ditch on the side of the road?

The same part of me that wants to wear a sports bra as a big “f-you” to the voice that tells me I’m not “fit enough” to pull off running in a sports bra wants to also act in defiance against the culture that objectifies this body. It wants to blame me for putting myself at risk because of what I chose to wear on a run.

And then there’s a part of me that is scared— that doesn’t want to be followed or cat-called or targeted or attacked. This part of me wants to come home to my three babies and my hubby, who’s head I’m happy to turn because we’re still in love after all these years.