Every runner deserves a number-one fan.

For me, that fan’s name is Jonathan, my boyfriend. He wakes up before sunrise to drive with me to races that he doesn’t run, makes me post-run smoothies when I walk in the door and has even carried me to the car after a challenging marathon.

I’ll be the first to admit it: I have it pretty good. But you know what’s even better than a fan? A partner.

Over the years, Jonathan’s watched me run more times than I can count, but he’s never really been bitten by the bug himself. That changed this winter when, after a 10k race I ran, he told me out of the blue that he wanted to run a 5k. I was thrilled.

Last weekend, following months of training to slowly ramp up his mileage, new shoes and a lot of hard work, the time for Jonathan’s 5k finally arrived. We loaded up the car with wicking apparel and headed to St Augustine to run the Race to the Taste 5k.

We decided to run together the whole way. One thing we didn’t count on when making plans in January, however, was how hot it would be in late-April in Florida.

While the heat index was insane, the 5k was super fun (for me at least!). Grabbing water for him, giving him a pep talk at mile 2 and sprinting with him through the finish—I was able to give him the support I’d so often been on the receiving end of.

After the race, we cooled down a bit before refueling with some local treats at a nearby food festival. “I never have to do that again, right?” Jonathan joked—although I’m betting he will. After all, he’s already a runner with a number-one fan.

Let me know who your biggest fan is on Twitter @JessieSebor. 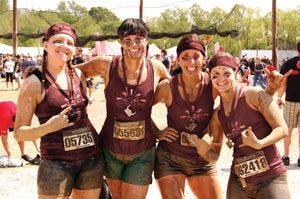 How to Run Faster: 6 Winter Training Tips for a Speedy Spring and Summer