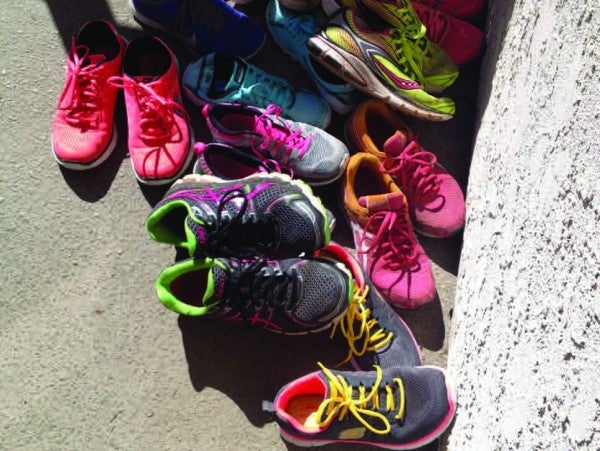 One look at my front porch, and you’ll have a good idea how I feel about running footwear. The giant pile of shoes is not (only) to booby-trap burglars. In a word, I’m obsessed.

I love trying out all types of running apparel and accessories. Who doesn’t? But there’s something about shoes that’s extra special. Once I’ve run a handful of workouts or races in a particular pair, I feel bonded to them. We’ve sweated and strained together. I may have done most of the work, but the shoes carried me along my journey. For those miles, we were partners in crime.

Women’s Running is introducing our first-ever Sole Mate Awards (read about the award winners here)—a name fitting for running footwear. While working on the article, I couldn’t help but reminisce about shoes that have found a special place in my heart. Although I’ve been running for more than 15 years and worn hundreds (yikes!) of shoes, I think I remember every single one of them and the lessons they taught me. Some of my favorites include…

Asics Gel Cumulus (~1998): My first loves! Before I started cross country during my freshman year of high school, my mom took me into Boston to pick out a pair. I had never bought any sort of shoes that cost more than $50. These were an incredible treat. And I loved the name because they did, in fact, feel remarkably like clouds.

Mizuno Wave Riders (~2003): When I joined my college cross country team, we were given Mizunos to wear during practice. At first I balked at the idea of sporting anything but my beloved Cumulus, but what college kid can argue with free kicks? After a few runs, I started to more than like them. Perhaps, I realized, there are other fish in the sea.

Nike Free (~2012): In 2011, I suffered a knee injury that sidelined me for nearly a year. When I had healed enough to start running again, these shoes were the only pair that didn’t aggravate my sensitive joint. At the time, I loved them like they’d rescued me from a burning building.

These days, however, I like to mix it up. Rather than staying loyal to a particular brand or model, I make an effort to try new things. While I have a fondness for all the shoes I’ve worn, I feel like I’m still searching for my sole mate.  After all, who says you have to have just one?

What makes you fall hard for a pair of running shoes? Tweet me @jessiesebor and let me know!