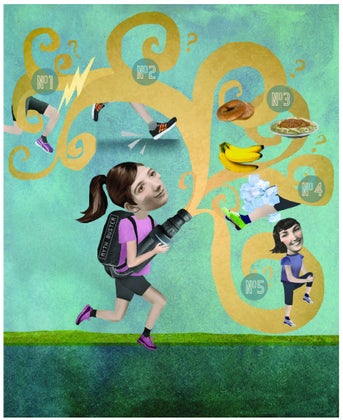 Running is terrible for your joints. Stretch before every workout. Eat all the pasta you can stomach! Whether it’s socializing at a cocktail party, chitchatting with a run bud or waiting at a starting line, we are constantly inundated with “facts” about training.

As a general rule of thumb, it’s best to take the banter with a grain of salt. But what’s spot on and what’s completely erroneous? To address some of the most common running claims out there, we let our experts weigh in to set the record straight.

The idea that running is tough on joints seems fairly intuitive—every time our feet make contact with the ground we land with multiple times our body weight. To assess the validity of this assumption, a recent study published in Knee Surgery, Sports Traumatology, Arthroscopy rounded up a group of first-time marathoners with an average age of 40. Examining MRIs of the participants’ knees before training and after the race, the researchers found no real damage and concluded: “High-impact forces during long-distance running are well-tolerated even in marathon beginners and do not lead to clinical relevant cartilage loss.”

Steve Gonser, a New York–based physical therapist, says he simply shrugs it off when someone suggests that running will cause knee problems. “The literature is fairly clear. Joint alignment, obesity and genetics as risk factors for developing osteoarthritis—not running,” he says.

Myth #2: Land With Your Forefoot, Not Your Heel

The barefoot running boom ushered in not only frog-like shoes, but also the claim that landing on the mid- or forefoot while running is better than landing on your heel. Exercise physiologists, however, haven’t reached any firm conclusions.

Research out of the University of Massachusetts showed that forefoot strikers take on more force at the ankle and less at the knee, while heel strikers have the opposite issue. Put simply, every runner experiences wear and tear—just in different areas.

“Heel striking isn’t a sin,” says Tony Williams, founder of Always Running Personal Conditioning Center in Seattle. “Genetically we are all different.” Bottom line: When it comes down to strike pattern, what works for your running buddy may not work for you.

Carbs are crucial for working muscles—but do you really need that giant bowl of pasta before your 5K? “Runners sometimes over-indulge, which can actually cause GI issues and insulin spikes that hurt performance,” explains Nikki Rafie, a coach and two-time U.S. Olympic Trials Marathon qualifier, who adds that extra carbs won’t benefit runners racing (or training) for less than 60 minutes.

However, she says athletes should up the grains before a race lasting longer than one hour. Research published in the Journal of Sport Nutrition and Exercise Metabolism found marathoners who carbo-loaded the day before the race ran faster than those who didn’t.

If you’re hopping in an ice bath after every workout, you may want to chill out. Sometimes soreness is part of the game—it indicates important training adaptations are being made. In fact, one study published in the European Journal of Applied Physiology showed that icing muscles post-exercise interrupted the desired training effects on muscle performance.

Gonser says, “An injury can be a wildfire of inflammation that needs to be controlled, and that’s the perfect time to ice, but icing for the sake of soreness may not be the best.” So unless you have an injury brewing, avoid piling on the bags of frozen peas. Rather, sit back and let your body make the adjustments it needs to make you faster and stronger.

Did you stretch before your laps in gym class? Of course! Who didn’t? But a number of studies say your PE teacher may have lead you astray. Recent research shows that static stretching before a run can actually diminish strength, power and muscle performance.

The Scandinavian Journal of Medicine and Science in Sports looked at data from 104 studies on getting bendy and concluded: “The usage of static stretching as the sole activity during warm-up routine should generally be avoided.” While stretching is still often recommended post-run when the muscles are warm, it can cause a whole host of issues when you’re not limbered up. Before a run, Rafie recommends warming up with mobility drills like marching, high knees and butt kicks. “Dynamic routines prepare joint movement and muscle activation,” she says.