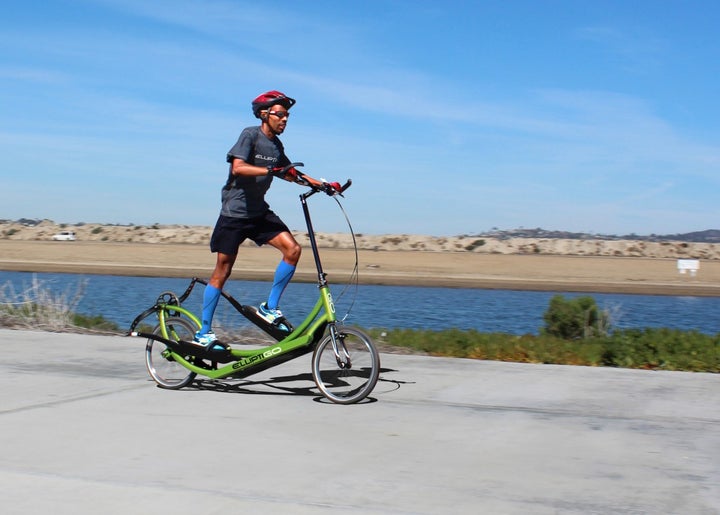 At this year’s Olympic Trials Marathon in Los Angeles, America’s favorite marathoner Meb Keflezighi ran his way onto his fourth Olympic team, finishing second in 2 hours, 12 minutes, 20 seconds, with an American flag in hand. At the post-race press conference, he emotionally addressed questions from the media, choking back happy tears nearly the entire time. This mood was only heightened when the final query of the afternoon was asking the other competitors to comment on Meb’s extremely impressive, long, successful career (it is rumored this will be Meb’s final Olympics). It was clear that the 2014 Boston Marathon winner was overwhelmed with what he had just achieved; not only had he made his fourth team, but he will also be the oldest U.S. runner ever to step to the line in Rio this summer. Consistency is key in marathon training, and if there’s anyone who knows that best, it’s 40-year-old Meb. We asked him a few questions about his cross-training tactics, specifically why San Deigans see him on the ElliptiGO, a San Diego-based company that makes elliptical bikes that can be ridden outside, on a regular basis around town:

Women’s Running: What differences have you seen in your performance/recovery since becoming part of the ElliptiGO team?

Meb Keflezighi: I’ve been running for more than 26 years. Sometimes when I was running double days, I was putting in 100-130 miles per week. As I get older I have to be smarter and wiser about my training. If I tried to do that much running now, it would lead to injuries. That’s why I added ElliptiGO training about four years ago. Now, even if I have a hard running workout coming up, I can get in a quality effort on the bike with no pounding on my legs and feet, and I can still go hard the next day. Consistency is the key, and the results speak for themselves. At 40, I’m still going strong.

Related: Running In Your 40s

WR: In your own words, why is the ElliptiGO a better cross-training tool than potential other options?

MK: I’ve done many other forms of cross-training—swimming, biking and aqua jogging, for example—but ElliptiGO bikes are the closest you can get to running. I run in the morning, and in the afternoon instead of going for a second run, I ride my ElliptiGO. I no longer have to do a 30-minute run like I used to do. Instead, I can ElliptiGO for 1.5-2 hours if I need time off my feet. That’s a tremendous amount of extra work, and it enhances my cardiovascular system and gets me fitter and stronger with no impact whatsoever. The ElliptiGO rides allow me to add in a lot of cardiovascular work, and ultimately that’s what the marathon is all about.

WR: A new model, the Arc, recently came out. Have you tried it, or do you have plans to try it, and what have you noticed that’s different than the normal model?

MK: Both ElliptiGO bikes are a great option for someone looking to cross-train without the impact. I have ridden [the older model] for the past four years and am used to its motion, but I have ridden the Arc since it came out too. The new Arc definitely has a more compact stride that feels more up and down, which gave me a really good quad workout. I am not sure I could ride it for two hours yet—maybe with practice—but would definitely use it for shorter rides. Overall, I feel that the original ElliptiGO bikes provide me with the most comfortable, running-like feel throughout my entire leg, from my quads, to hamstrings, to glutes, and even calves.

The brains behind this popular elliptical you can ride on the roads chimed in on the new model as well:

Both the original long-stride bikes and the new compact-stride Arc provide a great, low-impact cardiovascular workout. The biggest differences in the two product lines are in the architecture and the “feel” of the ride. The long-stride bikes really give the ultimate in comfort and versatility. The elongated stride provides balanced muscle activation throughout the legs and glutes, and the ride has the most running-like feel. They’re great for rides of any duration, from cruising around the neighborhood to ultra-endurance events. The Arc’s compact stride is more vertical, so it puts more emphasis on building the quadriceps. It’s a time-efficient bike, ideal for short- and moderate-duration rides.

WR: Other than adding Meb to your list of ElliptiGO athletes, what has been the biggest breakthrough moment where more and more runners started using this for cross-training?

The crew at ElliptiGO: We have sold more than 15,000 bikes, so the popularity is there. But we wouldn’t point to any single breakthrough moment. Rather, it’s been a nice climb. Our customers—the majority of whom are runners—love their ElliptiGO bikes, and they are very passionate about sharing their success with other people like them. ElliptiGO owners are often found as lead pacers for road-racing events, riding in cycling events or showing up at their regular training group with their bike so they can socialize while cross-training. For runners, there has always been a strong sense of community, and we definitely see that carry over into our owner base. Speaking of “climbing,” that’s one question we get asked often: “Can it climb hills?” The answer is an emphatic: Yes! But even if you’re a flatlander, tossing in some solid sprints on an ElliptiGO bike will act like great hill training.

Yes, The Elliptical Can Create Champions. Here’s How.