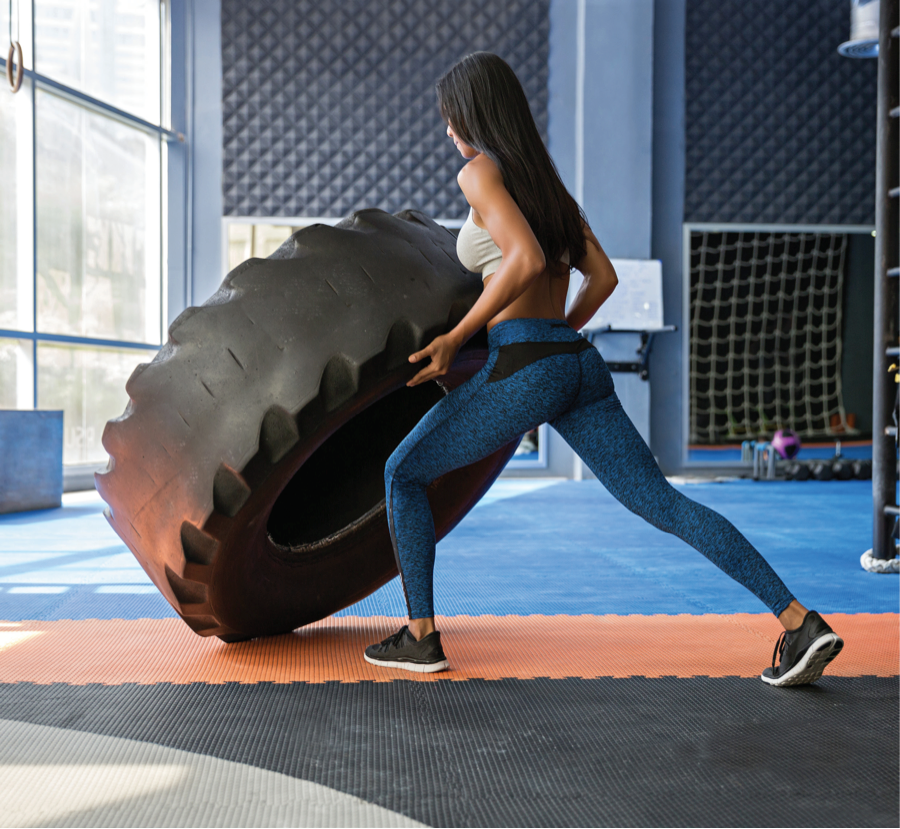 I knew it’d either break me or make me stronger.

In March of 2015, I had yet another appointment with my longtime physical therapist. This visit, I was seeing him for hip instability and pain on my left side—and probably some other aches too. I have loose ligaments that create issues when running, a tweaked back from college, a subluxed cuboid bone, a rotated pelvis resulting in a partially torn hamstring, a whacked-out hip…the list goes on.

It just so happened that my physical therapist had moved his office to share space with CrossFit Roots, a local chapter of the extreme fitness franchise.

“You should do this,” he said after my appointment. I watched the nearby athletes seemingly thrash their bodies doing he-man/she-man moves. “No way,” I said. “I’m too fragile.”

“It may be just what you need,” he replied. Tired of struggling with injuries for decades, I considered the suggestion.

A week later, still worried about overtaxing my ligaments, throwing out my back or tearing something new, curiosity won out. I walked into a free “Intro to CrossFit” class.

The three of us in the session told the instructor, Nicole Christensen, who, coincidentally, is one of the most respected CrossFit coaches in the country, what our athletic backgrounds were.

“I’m mainly a runner—I’m always injured. I’m hoping to become more durable.” I said something like that.

Nicole explained a couple of things, showed us what a burpee was, demonstrated an air squat and put us on rowing ERG machines.

Must, Beat, Gymnast Girl consumed my brain. I’m a runner, after all, and love to compete.

The workout included a sprint on the rower, sit-ups, air squats, burpees and pushups.

Nicole stopped me during my air squats to show me proper form. The competitor in me wanted to keep charging, but I listened. The darn gymnast beat me by a few seconds, and I hung on to that for way too long. But I also held on to the fact that I felt instantly stronger, empowered and hopeful.

In the days that followed, despite the workout lasting about eight minutes, I was so sore in my upper abs that I leaned over at the waist for three days and gave myself acid reflux. I thought I had the flu, but I think I just had smashed guts.

My husband, Mark, is also a runner and was interested in trying something  new. We both signed up for two weeks of CrossFit “foundation” courses. That meant we’d go to three hour-long classes a week for two weeks, where coaches teach the fundamentals of a regular class (called “WOD,” or “Workout of the Day”).

We learned weightlifting moves and did workouts that count the number of rounds you can do in a certain number of minutes, which is, I’ve learned, an “AMRAP” (short for “As Many Rounds As Possible”). Man, I thought as I struggled to breathe, these CrossFit people love their acronyms.

My problematic hip would sometimes hurt during squats but feel better after class, seeming to have been coaxed back into alignment. And when I’d try other bilateral moves, one side of me would be more sore than the other. I was excited about that—the exercises were exposing my imbalances, and I was working on them in a fun, social, competitive group setting under a trained coach’s eye.

Despite my intense body aches, I ran on days off from the gym those first couple of weeks. I took note that my hip didn’t feel out of whack as it had for months.

We talked about the newfangled workouts we were doing, about other people in the classes, the general scene of the gym. We compared sore muscles, which might differ between us after the same workout.

When we started going to regular classes after “graduating” from Foundations, I hated calling them “WODs,” so I rebelled and used the word “workouts.” I also didn’t want to call the gym the “box,” another piece of insider lingo. Not that there’s anything wrong with the jargon—I was just fighting it and loving it at the same time.

At a workout one morning, I tried a crazy gymnastics-esque strength move on rings called “muscle-ups,” the 10 other people in my class cheering me on. I realized the camaraderie and group setting was something I’d been missing in my regular routine without even knowing it.

I did my best to not get too caught up in the competitive nature of the workouts, especially when it came to weights. I stayed light and learned proper form to avoid having to be dragged into my PT’s office from the gym floor. And I was realizing that, unlike running, where I often think and sort through things in my head, stepping into the gym/box cleared my mind and forced me to be present. In a coached group workout, there was no time to think about business projects or personal stuff. I appreciated the mental break.

As a runner (and a human), I have notably slumped shoulders. By the second month in, I could tell my shoulder blades and upper back were stronger, my chest muscles less tight. I began to feel less pain while running. I��said “yes” more often to longer trail runs with girlfriends.

I had been doing three workouts a week and running outside on my other days, when I tweaked my hip carrying a medicine ball. That afternoon, I unwisely did a ton of physical yard work, shoveling mulch and pulling weeds. I’m sure I used all-around bad body mechanics. My new CrossFit self was perhaps a bit overconfident.

On the next morning’s run, my hamstring hurt. Crap, I thought, here I go again. But I felt like I had the tools to help myself get better. I foam rolled the snot out of my glute (CrossFitters are big into foam rolling). The pressure on my butt fired up my sore hamstring and I could tell that I’d torqued my pelvis. I saw my physical therapist. I went to a workout…a WOD at the box. (There, I said it.) After doing squats and “med ball cleans” (weightlifty squats with medicine balls), focusing carefully on my form, I felt realigned and in less pain.

I realized that CrossFit, for me, had turned into a really intense form of physical therapy. By the weekend, I was running 45 minutes relatively pain-free. The following week I resumed hard running workouts.

I ran my favorite event—the 7.4-mile Dipsea trail race—in June, and posted a faster time than I had in years. I felt more sturdy, less trashed afterward and pleased with my effort, halking it up to my newfound strength and balanced body.

In July, the gym started offering Track WODs. This was a full-blown track workout. “Elbows in,” Coach Kirk shouted to me when doing 400 meters at 5K race pace. “Drive your arms.” It was fun. Then he asked me, “Is your right hip flexor tight? I can tell.” It is! My right hip flexor is tight! He showed me some stretches. I was sold on track WODs.

Soon after, I set out on a big weekend run, logging 30 mountain miles over two days. Nothing hurt, aside from the calluses on my toes. No bad hip, no loose foot bone. No wonky pelvis, no strained hamstring.

And in August, with five or so track WODs under my belt, and about five months of CrossFit workouts in total, I did a 1-mile road race. I came through the finish in a time within seconds of what I ran in college—faster than I had raced in a couple of decades. To boot, as I rounded the last corner, gunning along the final stretch downtown, I heard a number of “Go, Lisa!” cheers. It wasn’t until after the race that I realized it was a group of people I’d met doing WODs at the box.

I had a newfound speed, a pain-free body, a supportive team.

You Can Do CrossFit

Nicole Christensen, owner of Boulder, Colo.’s CrossFit Roots and Level 4 certified coach, says CrossFit’s workouts complement running. “The idea is to mix strength elements (bodyweight or weighted) with a metabolic (cardio) response,” she says. “This carries over to strengthening your overall running capacity.”