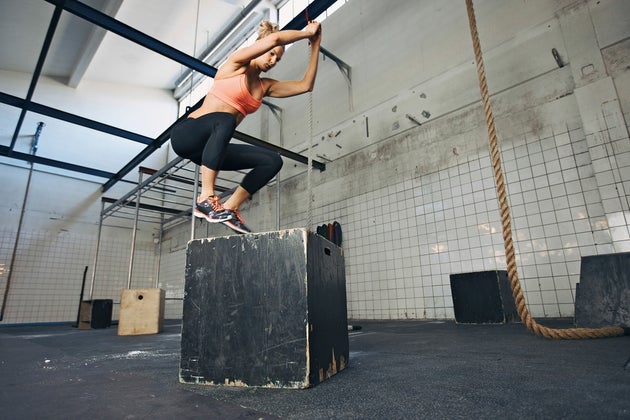 It’s been a heated debate for a few years now: Is CrossFit ideal for runners who are training for a marathon?

CrossFit has had a notion to cause many injuries, but here’s a little secret: It’s the same with running. The constant pounding on the pavement causes runners some sort of pain. In fact, over 56 percent of the running population sustains some sort of injury. Studies suggest 50 to 75 percent of those injuries are due to the constant repetition of the same movement.

“I spent three months working at a running shoe store for a story in the May issue of Runner’s World—and it was sad how many people came in to buy running shoes who told me they were just using them for walking because “My knees are gone” from the running they used to do,” says TJ Murphy, co-author of Unbreakable Runner.

The injury rate for CrossFitters is approximately 20 percent, according to the Orthopedic Journal of Sports Medicine. “I would imagine most runners who dismiss CrossFit are doing so because they’ve seen what elite CrossFitters do—which is very, very extreme stuff with plenty of risk for injury. But that’s the same for elite runners putting in 140 miles per week. I would argue that running 140 miles a week has a higher risk of injury than training for the CrossFit Games,” expresses Murphy.

Regular CrossFit, which is a strength and conditioning program, focuses on smart training tactics. A CrossFit workout is constantly varied and uses functional movements that are performed at a higher intensity. In other words, you’re mixing up the workout, unlike running which is a steady state—same pace.

“Routine is the enemy, and constant variation creates the most training effect,” Murphy says.

Take three weeks of three CrossFit-style workouts per week that take anywhere from 4 to 20 minutes, and reduce your running from 7 days per week to 4 or 5 days a week, and you’re going to get the following benefits:

CrossFit workouts don’t repeat the same movement over and over like running. The constant change tests your body and improves your reaction and movement. You’ll strengthen smaller muscles that you wouldn’t be able to challenge from running because you work in different planes and at different speeds.

To give CrossFit training a try for your next race, Murphy suggests you to run three days a week, and every other day do the workout: 10 burpees a minute for 10 minutes.

More minutes or more burpees per minute if you can. Do as many minutes as you can, maintaining proper form. “In a month I would bet the runner would see the following benefits: fat loss, better hip strength, more power, more tone, more upper body strength, stronger core,” says Murphy.

You don’t need to join a box (CrossFit gym) to do these workouts. Like running, you can do them any where. If you need a class, coach or a gym to help get you started, you can go on You CrossFit.com. Many gyms have CrossFit Endurance programs, which are ideal for those who want to run races using the CrossFit Endurance model.

Read More:
Girl Talk—Adventures In CrossFit
Get A Great Workout In Only 20 Minutes