Triathlon training can help your become a stronger runner. 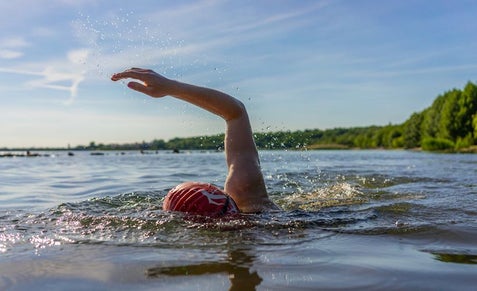 On July 17, 50 teams of elite ocean athletes from the Northeast and Mid-Atlantic gathered in Atlantic City, N.J. for four grueling rounds of competition. I was lucky enough to be invited to an immersion event the week prior, which offered a small taste of what ocean athletes experience.

Bruckner Chase, the technical director for the Red Bull Surf & Rescue and an elite athlete, led the immersion event. He discussed the intense training and tasks that professional lifeguards endure on a daily basis before putting attendees to the test by challenging us to swim to a buoy and back. Easy, right? Let’s just say it didn’t go well. I realized that just because I can run, doesn’t mean I can swim. Luckily, the lifeguards swam with me the entire time and made sure I got to the buoy and back safely.

For runners who have dreams of participating in a triathlon one day, the swim can be the biggest barrier to entry. With experience in professional triathlons, ultra marathons and marathon swimming, Chase is the perfect person to consult about the nature of swimming for a triathlon. If that’s on your bucket list, here’s what you need to know.

“Most people don’t have experience in open water,” Chase says. It’s something I had never really considered until trying to swim to that buoy in the Atlantic Ocean. Of course, as a New Yorker, I’ve been to the beach hundreds of times—but I’ve never gone out to where I can’t swim. “Don’t underestimate how demanding an open-water swim is going to be,” Chase adds. Many people move into triathlons and subsequently, learn to swim later in life. With that, it’s important to respect that the constantly changing nature of the ocean makes open water much more difficult to navigate than a swimming pool. “The key to mastering the swim is staying calm and not worrying about speed.”

Chase has many mantras that stick with you, my favorite being, “The best ocean athlete is usually the wisest.” That means being aware of the elements and practicing the swim outside of a pool. “Find opportunities to swim safely in the open water with pro coaches that are qualified with open water experiences,” he recommends.

Luckily, the fueling regimen for swimming isn’t all that different than it is for running. Arguably the most important aspect of the swim is staying hydrated. Since you won’t feel yourself sweating or overheating in the water, you may end up neglecting hydration. But being properly hydrated before a swim is essential to performance and level of awareness. Aim for a light yellow urine color prior to getting in the water, which indicates proper hydration. “I like the 8 ounces of Red Bull with 80 milligrams of caffeine to keep me aware and help maintain my blood sugar level,” Chase says. Carbs are equally important for swimming as well, but too much in your stomach can cause cramping. Chase suggests small carb-heavy meals and liquid calories—like those in sports drinks—to maintain blood sugar levels. “Once your blood sugar starts to crash, it affects your decision-making process. It won’t just cost you the race; it could cost you your life.”

Now that you’ve overcome the fear, done the training and mastered the nutrition, it’s time to hit the open water. “People tend to stand in waist-deep water with waves pounding them in the chest. Once you’re in the ocean, you’ve got to go,” Chase says, imploring first-timers to stay as calm as possible. Easier said than done, right? Hopefully knowing what to expect can help you maintain a clear head. “Usually the swim is the first event in a triathlon, and racers carry that with them for the rest of the race. Can you get through anything it might throw at you?” Chase asks. With this guidance and ample training, we think so.

How I Went From Hating Running To Becoming An Ironman