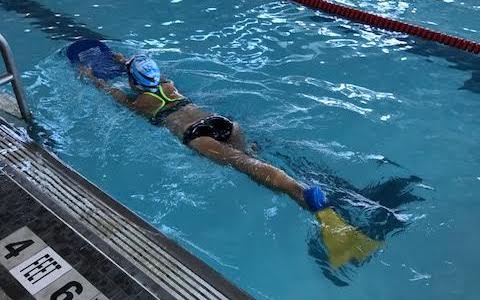 How does a woman on the verge of 30 not know how to swim when she grew up with a pool in her backyard and the ocean only five minutes away?

I know. It’s baffling. Childhood friends to whom I waved wistfully from the shore as they bodysurfed in the deep blue couldn’t believe I still only Andre the Giant doggy-paddled.

This ineptitude, like most things never learned, is rooted in fear. I was the kid who held onto the pool ladder with my swimmies on, a sitting duck during each round of Marco Polo.

A fear of drowning is not completely irrational, though I mostly grew out of it when I was tall enough to stand in the shallow end of a pool. But not knowing how to swim felt debilitating, especially when people who knew I was a runner asked if I’d ever entered a triathlon. Um, are floaties allowed in the open water leg of the race?

It was time to change that. No more waving from the comfort of my beach chair. I’m a grown-ass woman and this was to be the year I would take the proverbial plunge and learn to swim.

Related: Master The Art Of Swimming With These Tips

My lessons took place at Chelsea Piers Sports Complex in New York City, where Jenny Otto, a former Level 1 USA triathlon coach, equipped me with swimming basics and self-confidence, which would come in handy later.

After my newbie status became blatantly obvious (I asked Jenny how one pulls on a swim cap, and she kindly demonstrated), I jumped into the indoor 25-meter pool.

Jenny had me swim to the end of the pool and back to see what she had to work with—which wasn’t much. Besides poor swimming form—there was lots of splashing—I was exhausted before I touched the wall at the far end of the pool. I was already tired, hadn’t yet swum a full lap, and the lesson had barely begun! “Believe it or not,” I said between gasps, “I run marathons.” I couldn’t tell if Jenny thought she had her work cut out for her, but I’d hoped by revealing my endurance running background she wouldn’t feel as daunted as I did in that moment.

Of course, Jenny is a professional. She handed me a kickboard and explained proper swimming form.

“This may sound cliché, but you need to become one with the water,” Jenny said. “Elongate your body. Don’t go loosey-goosey in the torso. When your body gets tired and drops down in the water, it makes swimming more difficult. Notice this difference. Try to be efficient. Don’t go against the water.”

She apologized for “assaulting” me with information. Needless to say, I looked like a head case as I repeated to myself “Elongate! Don’t drop! Be efficient!” (Note to self: unless you like the taste of chlorine, swimming mantras are best thought, not spoken.)

Besides tailoring my form so I didn’t look like I was flailing in the water, I realized a major difference between swimming and running is planning one’s breathing. Seasoned swimmers obviously don’t have to think “1, 2, 3, breath” when they cross stroke, but for a tadpole like me, the thought of calculating breathing makes learning all the more intimidating.

By using the kickboard–and later, a pair of flippers–to aid me, I learned to sidestroke and barrel stroke while remembering to come up for air.

“We’re not doing hypoxic training,” Jenny said when I forgot to count between breaths. According to Jenny, the trick to successful swimming is finding your rhythm.

“Swimming isn’t as easy as hopping back on a bike and pedaling,” Jenny said. “To become a better swimmer, you need to practice at least three times a week.”

And so, after two sessions at Chelsea Piers, I went to my graduate school’s natatorium and suited up for a solo swim.

I plopped into the slow lane, swam with a kickboard for 50 meters…and then climbed out and made a beeline for the locker room.

I’d become overwhelmingly self-conscious seeing the lithe swimmers in the fast lanes. Standing dripping wet by the showers, I debated on whether to literally throw in the towel or tough it out.

I had to tell myself that no one is judging me or truly paying attention to me. (Well, except for the lifeguard.) It’s weird to contemplate quitting something because you’re afraid of making a fool of yourself. After my pep talk, I went back to the pool and swam a few laps. A small victory to some, but it required a significant amount of bravery on my part.

Jenny told me that a major obstacle for adult beginners is that they tend to get frustrated and grow impatient with themselves when, in reality, the trick to swimming is to relax.

There’s no question I’m more minnow than shark, but I feel braver in the water. Who knows–maybe a triathlon is in my future. One thing’s for sure: I need to invest in a good pair of earplugs.

“Everything okay?” a coworker asked. It was after a Chelsea Piers session and I was hopping on one foot with my head tilted behind my desk.

“Just a little water in the ear,” I said. A small price to pay after learning how to become one with the water and ending a lifelong drought.

Does Cross-Training Make You A Stronger Runner?

3 Reasons All Runners Should Cross-Train

How Sport Sampling Can Unlock Your Running Potential