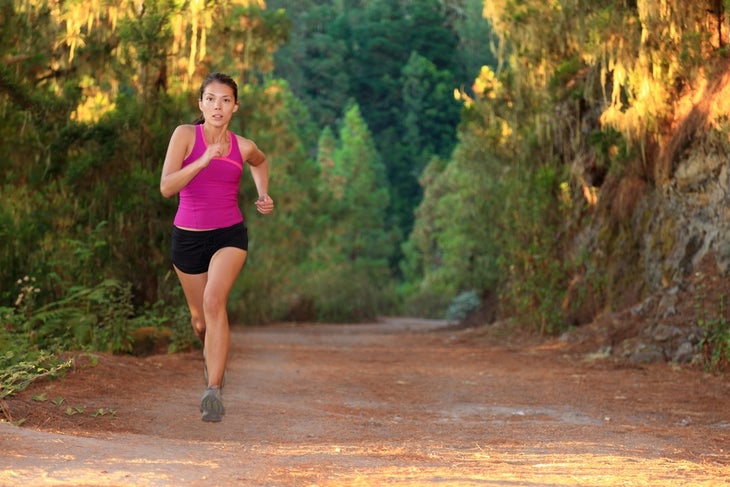 Let me know if one of these scenarios resonates with you right now:

1. The last race you ran was a few months ago and almost all your running of late has been easy and unfocused. But the fall racing season is right around the corner and you know it’s time to start adding some intensity back into your training schedule.

2. You’ve been doing weekly track workouts throughout the summer and you’re getting tired of running around in circles.

Fortunately, we’ve got a workout to help dig you out of either situation. The Kardong Fartlek—named for Don Kardong, a collegiate track champion at Stanford and 1976 U.S. Olympic marathoner—is a great short speed session for transitioning back to faster workouts after an extended time away from hard training, but it can also be used as an intense off-the-track interval session when you’re fit and in flying shape. It can work for runners focusing on the 5K or even those preparing for a marathon. The key is adjusting your pace, along with the number of sets and recovery, to suit your individual needs.

Here’s how to do it:

— For recovery, jog for two minutes after the 2-minute interval and 60 seconds after the 1-minute pickup. Take a 2:30 jog for recovery in between sets.

Kardong liked to do a variation of this workout when he needed a break from running intervals on the track, according to Michael Sandrock’s book Running Tough. If he was getting ready for a track race, Kardong would do fewer sets with less recovery. Before a marathon, however, he’d often opt for more sets with longer rests.

“I liked using time because it’s easy to keep track of on a digital watch,” Kardong was quoted as saying in the book. “This had some of the advantages of fartlek since I was relieved of the mental burden of trying to run a certain precise distance in a certain time, and I wasn’t confined to an oval. And it had the advantage of a track workout in that there was structure to it, which I found helpful. I also liked the mix-up of distances.”

For experienced half marathoners and marathoners, doing 5 to 7 sets of these surges at 10K to half-marathon effort in the middle of a long run is a great way to practice running faster on a fatigued set of legs, as well as to get ready for dealing with the irregular rhythm and pace changes you’ll surely face on race day. Runners preparing for 5K-10K racing can benefit from 2 to 5 sets of faster surges as described above. Adjust the key variables—pace, recovery and the number of sets—to line up with your current fitness level and training focus.