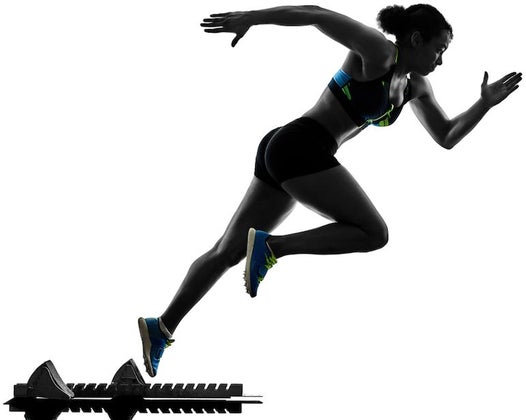 Whether you’re chasing a race PR or simply looking to boost fitness, adding one or two speed workouts to your training week will do the trick.

Speed workouts include anything faster than steady-state running, says Elizabeth Corkum, a USATF-certified running coach and owner of Coach Corky Runs in New York City. So, think tempo runs, track repeats, striders, fartleks and whatever else you can imagine. “The fun thing with speed is there are a ton of options to mix up your training,” Corkum says.

Trouble is, many runners jump into speed training without proper prep, which can wreak havoc on muscles and joints. According to Mike Young, Ph.D., director of performance and research and lead researcher for Athletic Lab, speedwork—sprinting in particular—is a violent, high-stress activity. It requires more muscles to turn off and on at one time, more so than even highly technical strength-training exercises like the Olympic snatch. And even less intense forms of speedwork can cause damage if you’re not prepared for it. The most common injuries include hamstring tears or pulls, and stress fractures in the feet, Young says.

Before you jump into maximum-effort speed workouts, Young recommends taking a few weeks to prep your joints and muscles with one or two submaximal-effort runs per week. Week one, you’ll sprint for 20 seconds at 80 percent effort (you should only be able to say one or two words at a time), recover and repeat six or seven times. Next week, increase your effort to 85 percent. The following week, 90 percent, and so on. Eventually, you’ll build up to 100 percent, or maximum-effort sprints. (You’ll know you’re going at full speed if you can’t talk at all.)

And while you’re prepping your joints and muscles for high-impact speed sessions, work on dialing in your technique as well. According to Young, sprinting with proper mechanics will reduce your chances of injury and improve performance.

While sprinting or doing submaximal speed workouts, run tall and keep your knees high and in front of your body. “Make sure at all times that you’re at neutral postural alignment,” Young says. In other words: Maintain a straight line from the top of your head through your hips.

According to Young, the following drills will teach your body the mechanics of efficient running while preparing your muscles for the stress of speed training. Complete two sets of 30 meters for each drill right before your speed workout.

Jog to start the drill. After a few steps, push off explosively with one foot and drive the opposite thigh up so it’s parallel to the ground. Land softly and immediately repeat with the opposite leg. Continue moving forward by alternating sides, pumping your arms as you go. Focus on the height of your skips, as opposed to the distance covered by each skip, and make sure to push explosively off one foot with every repetition.

Similar to the high knee skips drill, you’ll want to push off explosively with one foot and drive the opposite thigh up so it’s parallel to the ground. However, in this drill, speed is more important than height. Aim to keep knees high while you cover the prescribed distance as quickly as possible.

Keeping your legs straight and your toes pointing upward, run for the prescribed distance. Aim to land softly on your midfoot, and don’t allow your feet to lift more than a couple of inches off the ground. Keep your torso upright and swing your arms to help build speed and momentum.

When you’re ready to kick things into high gear, try one of Corkum’s go-to speed-building workouts.

According to Corkum, this workout is great for speed newbies. While the bulk of the run is done at a comfortable pace, there’s a small dose of sprinting at the end to ignite fast-twitch muscle fibers.

How to do it: At the end of an easy or steady-state run, find a relatively flat surface and sprint for 20 seconds, or 100 meters. Then, ease into a jog or simply rest for 30 to 45 seconds. Repeat for a total of 4–6 sets.

Prepare for a workout that becomes even more challenging the further along you get. You’ll end with a series of quick repeats to teach your body to find that next gear when exhausted, Corkum explains.

Learn how to keep your pace consistent while tired with a sequence that repeats for three sets.

How to do it: Warm up with a 1-mile jog. Then, do three sets of the following:

Once you’ve completed three sets, finish off with a 1-mile cool-down jog.

A Simple Trick To Do More Sprints

Build Speed In 20 Minutes With A HIIT Treadmill Workout

Run Your Fastest Mile Ever With These Training Plans