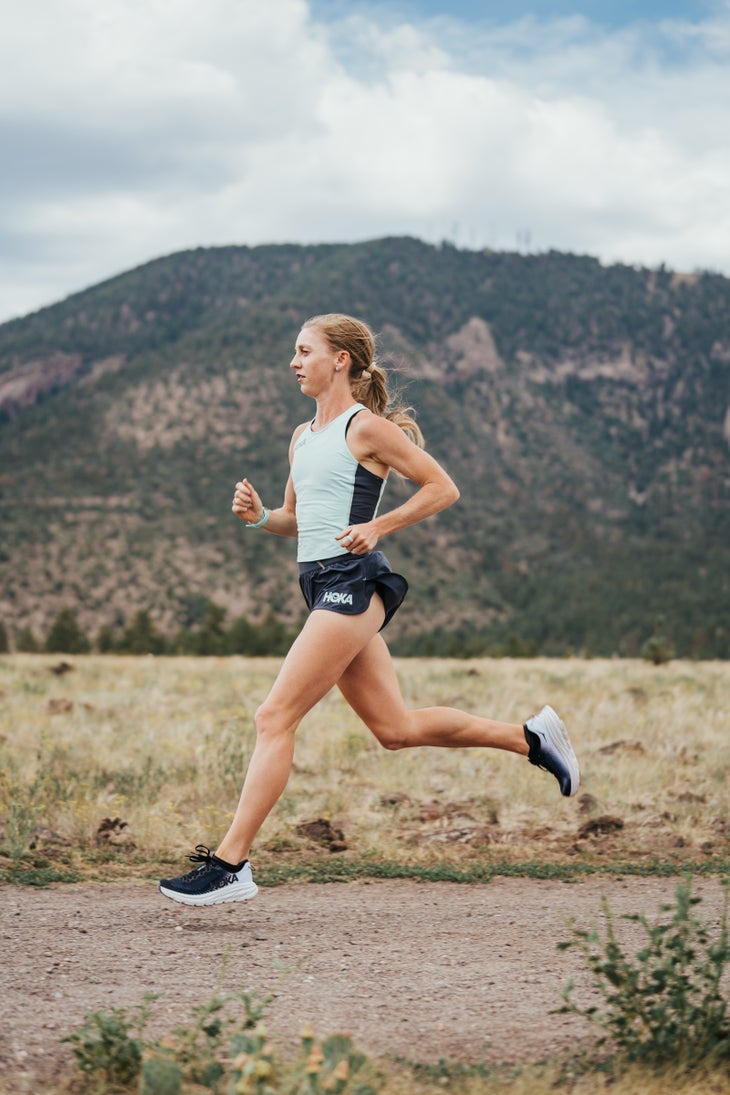 To come in seventh place in the 5,000-meter race at the Olympic Trials—in one of the deepest fields ever seen in women’s running—would be a huge accomplishment for any pro. For HOKA NAZ Elite middle-distance runner Lauren Paquette, it was about four places off of where she wanted to be: on Team USA.

It was an upsetting and frustrating finish for Paquette. But she’s not dwelling on it. “This season has been a kind of crash course in keeping a level head when things don’t go your way,” she says.

It started in February with a hamstring strain that took a while to heal; “I wasn’t really able to train much in March and April, then I ran my slowest time ever in a race in mid-May,” she explains. Her leg started to improve after that and she was able to get a solid four weeks of quality training in. Then, two weeks before the prelims, she came down with the flu. Two days later, she got in a car accident. Who would have blamed her for giving up on her goal?

“At a certain point, it got to be comical—like, really?!” Paquette says. “That was actually helpful in dissipating some of the pressure I was putting on myself. I really tried to focus on times in the past where things haven’t gone my way and I’ve rallied, times where I had really bad races then PRed the next one.”

Running is 90 percent mental, the old adage goes. Knowing how to tap into your reserve of mental strength, build resilience and patience, and manage setbacks and disappointment can make all the difference in going after bold running goals.

Strengthening your mind requires training, just like strengthening your muscles. That’s why you do long runs, where you’re on your feet for hours; why you do speed workouts at paces that can seem downright scary to hang onto even for just a few minutes. It’s about getting comfortable being uncomfortable, so when it counts (read: in a race), you know what you’re capable of. “I wanted to quit [800 meters into the Peachtree Road Race this year] because I was already really uncomfortable,” says Bruce. “But the thing is, I’ve trained so much, I know one of my strong suits is being able to push that pain of racing. I’m really confident that if I have to grind, I can keep grinding.”

It’s OK to acknowledge that running sucks sometimes. It’s hard and it can hurt, but acknowledge that and don’t linger on it—the more you think negative thoughts, the more you’re going to spiral. Hyping yourself up with motivational self-talk, on the other hand, was shown to boost athletic endurance in a scientific review of more than 100 sources published in the journal Sports Medicine.

Even when it hurts, there’s nothing quite like the thrill of challenging yourself to push past your limits—and then doing just that. But while the wins might come easy when you first start running, it gets harder to best yourself the better you get. Seeing those bold results is a long game, not something that happens overnight.

“I’m a very impatient person, I want to see results immediately,” says Alice Wright, who joined NAZ Elite in 2018, then set three straight personal bests in the half marathon in 2019. That wasn’t enough for her. “When I came onto the team, I wanted to run some mind-blowing time in the half marathon right away. But patience is the main thing I’ve learned from teammates like Stephanie, Kellyn Taylor, and Aliphine Tuliamuk—seeing Steph run PRs at age 37 reminds me not to panic when I’m not hitting the times I expect of myself right now.”

So much of running—especially when it comes to setbacks and disappointment—is about perspective. Of course there are things in your control: your training, your nutrition, your sleep. But there are many, many more things outside of your control. Any one of those things (the weather, your competition, a global pandemic…) may throw you off your game. The only thing you can do is make sure you’re going into a run in the best headspace possible and do the best you can given the circumstances.

“Going into the Trials, I knew I might not be in contention for an Olympics team, but I also wasn’t going to count myself out,” says Paquette. “And, no, I didn’t achieve my goal of being in the top three, but I’m still really proud of the effort because I just stayed as mentally engaged as I could. It’s this weird dichotomy of cognitive dissonance, like I can be unsatisfied with seventh place but also really proud of it, too.”