When Julia Kohnen joined HOKA NAZ Elite in October of 2020, she was the odd one out: A former college soccer player, she had only taken up running as a senior. While the other team members had years of NCAA experience and were already racing as pros, she had only one year of collegiate competition and one marathon win under her belt before joining the team.

“I was so excited to join the team, but so nervous coming in—these girls have so much more experience and accolades than I do,” says Kohnen. “But I was thrilled to get a front row ticket to some of the best training out there.”

Running may be an individual sport, but there’s no doubt that being surrounded by other runners can only make you stronger—a fact that stands true whether you’re the newest member of a professional team or a recreational runner logging miles for your first race. For starters, people who work out with friends said they enjoyed the exercise more than those who worked out alone, reported a 2013 study out of the University of Southern California. Plus, you’ve got a built-in support network.

“When I first moved from St. Louis to Flagstaff, I had never trained at altitude before and suddenly I’m training at 7,000 feet of elevation,” says Kohnen. “I thought I was pretty fit, but I could not hit my times anymore and I felt like crap.” After a couple bad workouts in a row, Kohnen says, Stephanie Bruce pulled her aside and told her how, when she started 10 years ago, she couldn’t hit a six-minute pace—and she had raced throughout college; now she’s running a 5:30 tempo pace. “She told me it takes a while to get there, and it was a reminder for me to be patient,” says Kohnen.

In the meantime, it’s also a reminder to keep pushing herself. “I don’t know if I could get to as high of a level as I want to without having the support of a team,” she says. “I always have had a competitive attitude, and being around people that are going really hard every day just pushes me to go harder.”

As a competitive person, it sucks to be coming in last compared to your teammates. But working out with people who are better than you is actually a smart strategy if you’re trying to improve: People who exercised with someone they thought was better than them worked out up to 200 percent harder and longer than those who worked out with someone at the same fitness level or alone, according to a 2012 study in the Annals of Behavioral Medicine. 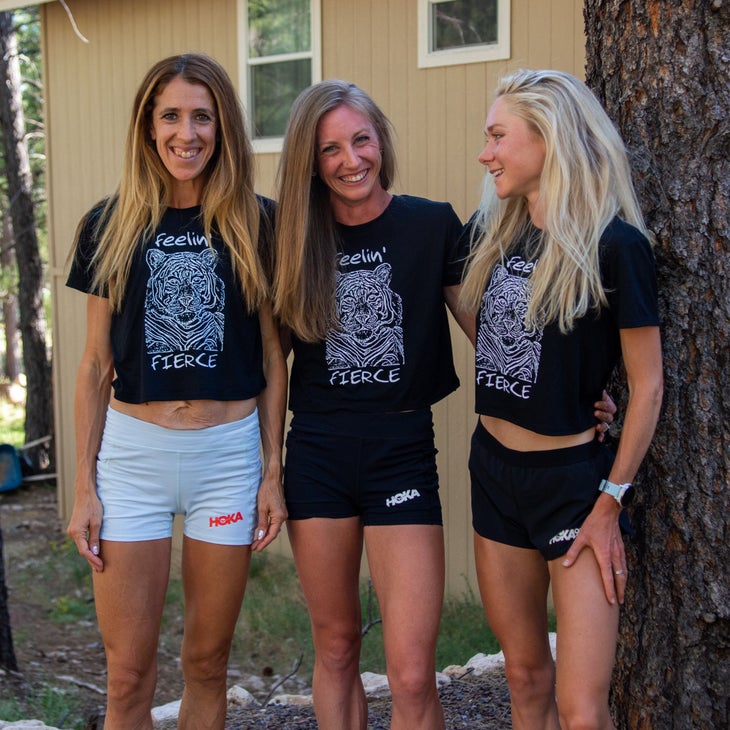 “Seeing Steph or Kellyn [Taylor] crush repeats in times that I would never think possible has only pushed me to be like, man, I want to be there one day,” says Kohnen. “And it motivates me to think, if I stay here, if I keep showing up, if I keep working hard, I can get to that level.”

Even when you’re not working out with others in real life, a virtual connection may be enough to spur you on. When your friends run an extra kilometer or an additional 10 minutes and log it online, it can inspire you to add an extra three-tenths of a kilometer or three minutes to your own run, researchers found after analyzing five years of daily running patterns of more than one million people who logged their runs digitally in a global social network of runners.

What you don’t want to do is compare yourself to those in your running community. So many fitness tracking apps these days are “gamified” to encourage users to keep logging their exercise, a January 2020 study published in the journal Information Technology & People reported. When you use them to give support and encouragement to other athletes, that’s great; but if your sole purpose for signing up is to get praise, you’re more likely to get stressed and become obsessive—two things that can really suck the fun and feel-good aspects out of running.

For what it’s worth, it’s not just newer runners who benefit from more experienced teammates or community members: After a disappointing fifth-place finish at the Peachtree Road Race in Atlanta on Fourth of July weekend, Bruce shouted out her teammates (and competitors) on Instagram, thanking them for their support. “The difference is what you get from different people,” says Bruce. “I think what younger people on the team give me is the fire, the excitement, the lack of intimidation. It’s a really rejuvenating and youthful attitude to be around. I think it’s a really symbiotic give-and-take on our team.”

You may be the only person capable of putting one foot in front of the other when it comes to the physical act of running, but no one survives this sport without a community full of cheerleaders and shoulders to cry on. Those are the people who help you bounce back from your worst runs—and inspire you to run your best ones.