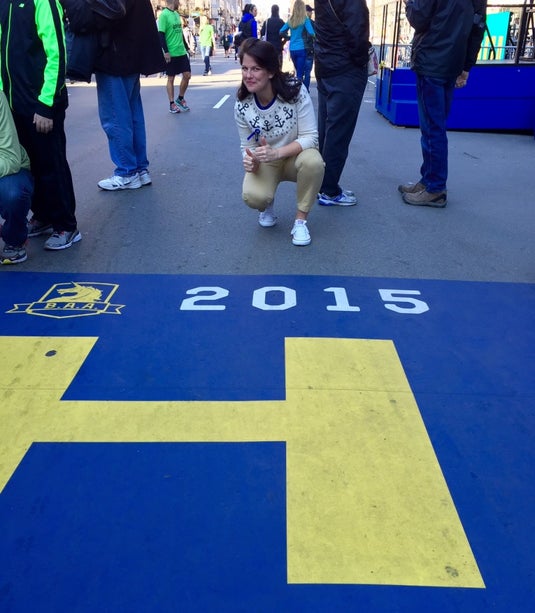 First things first, I am not a running expert, marathon guru, or Boston Marathon specialist. I am a casual runner who made it a personal goal to qualify and run the Boston Marathon and like most others, I was basically obsessed with everything about the Boston Marathon for the two years it took me to complete that goal. Fast forward almost a year and I have major race envy for everyone running this year. So I decided to share my experience with those running—here are the top-12 things I would share with my best friend if they were running the Boston Marathon.

Take Me To Church

But someone told me about this service at Old South Church—the United Church of Christ right at the finish line—and I planned my travel accordingly.  They have two services the day before the marathon for all denominations. The gal I sat next to in the pew whispered to me, “I’m Jewish, this is my first time in a church!” The best way I can describe this would be like a mini-Olympic opening ceremony with uplifting music and feel-good sermon, but instead of the athletes dressed in red, white and blue, the pews are filled with unicorn-embroidered jackets proudly worn by men and women in sensible footwear.

What’s In A Name?

This is one of the best and worst decisions I made, putting my name on my bib. Best because for the first 10 miles it was amazing to hear strangers call my name and send positive comments. Worst because it was too late to use iron-on letters and John Hancock was handing out oversized stickers for this purpose. This would have been fine if it hadn’t rained. My name bumper sticker fought the good fight but at mile 10 was a crumpled ball of wet paper in my fist.

Go Back To Kindergarten

I adopted this one from triathlon transition bags, and it worked so well in this scenario as well. With gear check at the finish line, you have to drop your post-race supplies prior to getting on the shuttles to Athlete’s Village and the starting line out in Hopkinton. I got to the village four long hours before I was supposed to start. To help keep myself organized, I put my supplies in clear plastic Ziploc bags with labels and instructions written on the outside: “Clifbar & Banana = Eat at 8 a.m.” “Anti-histamine tab & reapplication of BodyGlide = Use at 10:45 a.m.” “Gu #1 = Eat while walking to corral.”

Strategize With Your Spectators

This is not only incredibly helpful for them; it is also great mind diversion while you’re running. I created a nifty calculator that coordinates my predicted pace (approximately 8-minute miles) with several articles outlining the best spectator spots, public transportation stops and the timing mats that will report my position on the tracking app. All you have to do is enter your start time and pace! Also, encourage your spectators to travel light. Many of the viewing areas are behind barricades and require security screening. Here is a list of prohibited items.

Related: How To Be The Best Race-Day Spectator

“Change” Your Last Name To Zonnelie

After studying the map of the finish area as if they were blueprints, we realized that meeting at letter area “C” would require me to walk almost two extra blocks, only to backtrack once we reunited. Instead we opted to meet at Z. Not only is Z a less common last name first letter, but also a handful of extra steps were taxing after that race. 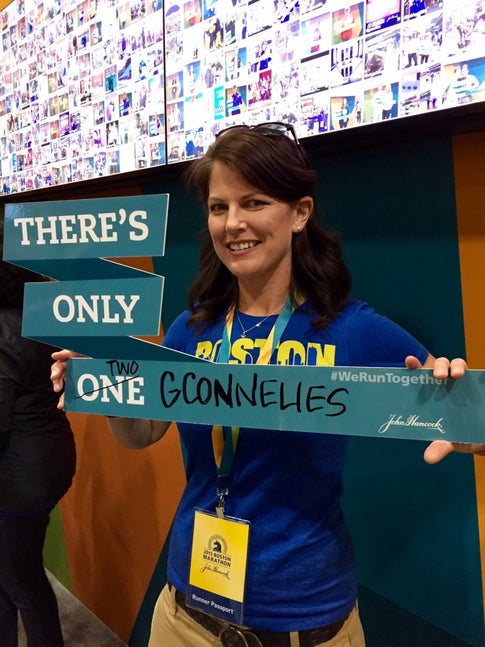 Yep, that’s a bathrobe, folks, and it was freaking awesome! It was warm like a blanket, but with sleeves and a tie to keep it closed. Runners tend to be a little self-absorbed and unimpressed on race day; amp that up 300 percent when it’s the freaking Boston Marathon. However, I knew I was on to something when a member of the Quarter Century Club smirked at me and said, “Great idea with the robe.” In case you’re wondering, I paired my robe with a pair of sweatpants over my running tights and plastic shopping bags over my shoes because it was a soggy and windy day.

Inflate Your Way To Comfort

This is another idea adopted from those who came before me. A few years ago it was common to bring an old yoga mat to the Athlete’s Village so you have something dry and semi-cushioned to sit on. New security restrictions state you can only bring a 1 gallon clear plastic bag on the bus to Hopkinton and ban items larger than 5”x15”x5” . However, nowhere in the rules did it prohibit a pool float. It was small enough to fit in my bus bag inconspicuously, and the bonus was that the air cushion also added a buffer from the very cold ground underneath. And when my wave 3 was called to the corral, there was no shortage of vultures wave 4 runners ready to pounce on my hot pink float.

While I am a huge proponent of packing my own nutrition for a race, it’s always nice to have supplements. I was downright shocked at the amount of food available (for free) at Athlete’s Village. Coffee, bagels, GU, even space blankets for keeping warm before the race. Make sure you keep your ears open once you’re there. After the initial rush of arrival and getting settled, it’s actually surprisingly easy to tune out all of the commotion and get in the zone. With so many announcements and constant movement, the last thing you want to do is miss the call for your wave. Sounds unlikely, but trust me, it happens. Keep your ears open. 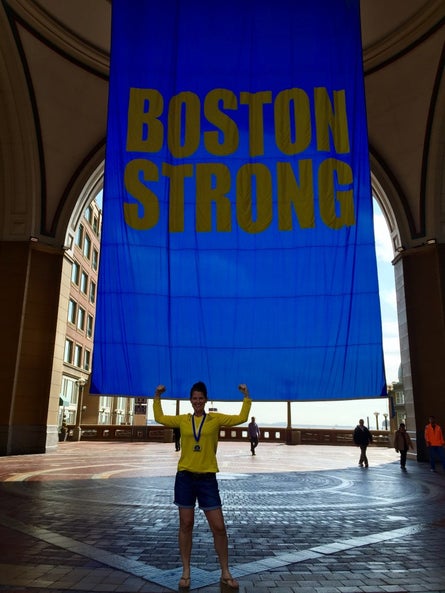 One thing I didn’t expect was there was almost zero change in position for the first 10 miles. This makes sense due to BAA’s strict qualifying standards and thus, extraordinarily accurate wave/corral placement. No one was sprinting past from the back or stopping dead in their tracks in mile 3, we just plodded along in almost military fashion until the reality of the race started to take its toll. This also created some really entertaining moments. Runners made almost 90-degree turns to cut across the field to grab fluids at the first water station, only to realize that the tables were staggered on BOTH sides. That’s when I said out loud, “come on gang, we can do better than that! We’ve got 20 more of these to go!” This was met with some laughs and high fives and we plodded along. As we approached water stop 2, someone close to me said, “here we go again,” and as if Moses were parting the Red Sea, thirsty folks on the left stayed left and thirsty folks on the right stayed right. It was a thing of beauty.

After the race, cabs and ubers are in very high demand, especially if the weather is nasty. The reality is there’s a good chance someone also trying to hail a cab is going to the same part of town. Be a good neighbor and if there is room in your car, ask if anyone else is headed your direction. It’s good karma people, and it’s good for our planet too.

It’s All About Swag

If you’re anything like me, you signed up to receive adidas email to get the 15 percent off and ordered every piece of Boston Marathon merchandise online. If you’re even more like me, you still spent hours in the expo shop looking for more merchandise that you simply must have! What you also have to remember, however, is other brands outside of the official sponsor definitely also make “unofficial” Boston apparel. Everyone gets caught up in Marathon Monday fever, so don’t forget to ask around! 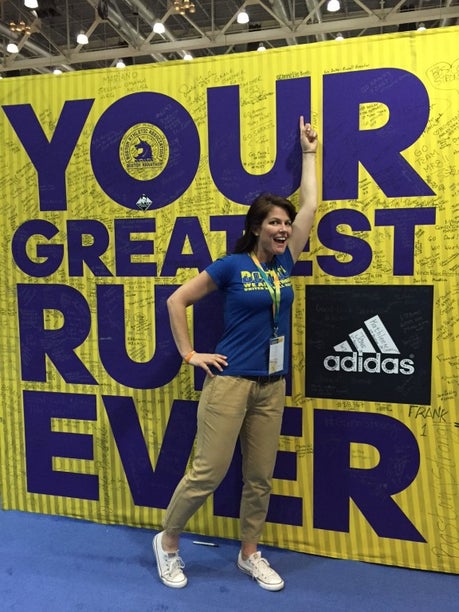 Smile And Show Your Bib

The fine folks over at Marathonfoto do a terrific job out there on the course. I seek them out, make sure my form is passable, smile, but not too big—I need to look serious like everyone who has ever appeared in a running shoe ad. I only found four official shots of my bib, so I did a little recon on bib numbers I remembered around me. The rain had caused my shirt to cover my bib, so after hours of searching, I was finally able to identify all my race shots!

Gretchen Connelie is a recreational runner and triathlete transplanted from SoCal to NYC. She manages restaurant marketing and menu development for Tommy Bahama. She qualified and ran the 2015 Boston Marathon and counts running the New York City Marathon as a guide for Team Achilles as one of her greatest running experiences. She is also in constant pursuit of a race photo that is remotely flattering. You can follow her on all of the social things at @GConnelie.