Ultras take long-distance running to a whole new level. Here’s what you need to know to tackle one of these extreme races.

Remember when the idea of running a marathon seemed crazy? Then you completed one. You should think about ultras the same way. Ultras are defined as anything longer than the marathon distance (26.2 miles). The most common race distances are 50k, 50 miles and 100 miles. The 50 miler is often considered the true entry point by many ultra purists.

PREPARING FOR AN ULTRA

If you’ve trained for and completed a marathon you possess the basics of what it takes to run an ultra. The good news is that running the equivalent of two or four back-to-back marathons doesn’t mean you double or quadruple your training mileage. Your longest long run, typically about 20 miles in marathon training, will be 30 to 40 miles (in the four- to six-hour range), depending upon the race distance.

“Running 30 miles will allow you to experience the ups and downs that are an inevitable part of an ultra and how to get through them,” says Janice O’Grady, a veteran of 100 ultras. Rather than running these long runs every weekend, do them every two or three weeks. Another method is to run back-to-back long runs on Saturday and Sunday. The Sunday run will give you a taste of running on fatigued legs. O’Grady advises to “never cut your run short because you don’t feel like finishing. Develop the habit of finishing everything you start out to do.”

These super long runs are kept at an easy pace with frequent walk segments. Often, runners “need to shift gears from running an entire marathon to running and walking the 50 or 100. Most races have hills, so plan on walking up hills powerfully and briskly and running the downs and flats,” O’Grady says. Walking may be a four-letter word to a marathoner, but even elite ultra runners walk portions of their race. While it may be an honorable goal to run the entire length of a marathon, it’s not smart to attempt this in an ultra. The goal should be to finish. Walk early and often—every step toward the finish is a positive. Practice this by including walk segments into your long runs. When considering your first ultra, look for either a 50k or 50-mile distance. It’s not recommended to go straight from running marathons to a 100 miler. In fact, most ultra runners will include a marathon and shorter ultras into their training for such an extreme distance. O’Grady strongly recommends doing multiple 50 milers before stepping up to the 100 miler.

Intrigued, but still unsure if ultras are for you? Crewing and pacing are both great ways to be a part of the experience without running the full distance. Crew members take care of their runner at various points along the course, while pacers encourage their runner to keep moving through fatigue and doubts as well as monitor salt, calorie and fluid intake. Pacers are usually allowed toward the later stages of the race. They also help make that crucial decision if stopping is the safer option.

The size of the crew often depends on the length of the race. A one- or two-man team may be plenty for a 50 miler, while more people may be required to work in shifts at longer races. Crews organize drop bags and personal items at aid stations and are ready for any possible request. Although most ultras have experienced volunteers to help the runners, having a crew that focuses specifically on you can be essential to getting out of the aid station faster and keeping you moving when things get tough later. 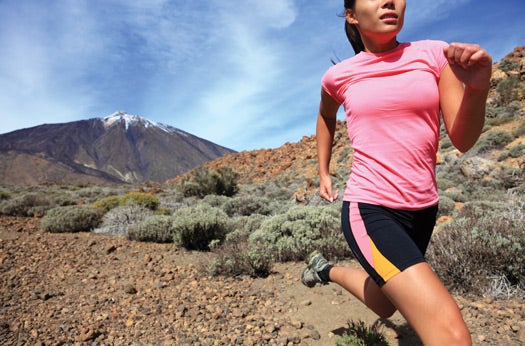 Pacers, despite the name, don’t actually pace a runner as a typical marathon pacer may for the front pack. Ultra pacers help their runner stay on course, keep safe and, if allowed, carry their runner’s supplies (called “muling”). The specific race dictates how much assistance is permitted. Pacers act as companion, nursemaid, entertainer, psychologist and coach. Most ultras require the runner to complete at least half the race before a pacer can come in. It’s common to have more than one pacer for 100 milers to ensure each is fresh for his or her job. Pacers are official participants of the race; they will often sport the same bib number in another color as identification. Most races allow one pacer at a time; the number is transferred to whoever has the current duty. It’s not an easy job, but it’s a wonderful way to vicariously participate in an ultra event.

During a marathon you may be able to get away with a few energy gels, some water and a couple cups of Gatorade. The ultra takes hydration and fueling to another level. “Ask 100 ultra runners what they eat, you will get 100 different answers,” O’Grady says. Of course, personal preferences prevail, but most runners need some sort of solid food to up their calorie intake. Nancy Shura-Dervin, founder of the UltraLadies Running Club (ultraladies.com) and finisher of 61 ultras, recommends finding out what will be provided at the aid stations and using your training runs to experiment with those products, especially solid foods. She says you can expect to find a variety of items such as meal replacements shakes, PB&J sandwiches, chicken soup, pizza, potatoes and fruit. Carry water or an electrolyte drink with you at all times. Some races make this mandatory. And, just like the marathon, practice your fueling options during training.

Many ultra runners agree that finishing an ultra is as much, if not more, a mental undertaking as a physical one. According to O’Grady, “being in good running shape isn’t enough—you have to be prepared mentally.” She suggests “doing some long runs when you are already tired to get the feeling of pushing through when you don’t feel like it.” While marathons certainly can throw challenges at you, knowing you have six or 10 miles left is often a number you can wrap your brain around. Tell yourself that you have 20 or 30 more miles, and it’s a whole new kind of mental challenge. Many ultra runners employ a variety of techniques to help them cross the finish line, like visualization, relaxation, goal setting, positive affirmations and avoiding negative talk. Shura-Dervin uses mantras and often will repeat phrases like, “next aid station” or “hurts so good” to keep herself moving, what ultra runners call “relentless forward motion.” Ultimately, though, she says what helped her most was learning how to enjoy the journey as much or more than the outcome.

RUNNING ON TRAILS AND AT NIGHT

Marathons are typically road events, while most ultras are held on trails. You certainly can find ultras on a 400-meter track or road-like conditions, but trails are the main host of these endurance events. Shura-Dervin recommends that newbies should start logging some miles on the trails right away. Learning how to navigate roots, mud and overhanging branches is essential. Expect your pace to be slower, and don’t let that discourage you. Many trail runners will focus on time rather than miles when out on the trails. Also, night running is often part of the ultra adventure. Fifty milers may start before the sun rises and finish after the sun has set. In a 100 miler, you can guarantee covering miles in the dark. While some recommend practicing a bit of running at night, most agree that there is no real way to train for this. As you can imagine, fatigue is often multiplied while running for hours in the dark. O’Grady suggests pacing a runner through the night portion of an ultra to get a feel for the experience. Even if you don’t get in any night running, make sure to test flashlights and headlamps that you plan to use on race day.

Within the ultra running community, less is considered more. The rewards of an ultra are often internal rather than external. There are things that you learn about yourself that can only be learned hours into a demanding physical effort. Self-reflection is pretty much a given when you are out there for that length of time. “You learn that your own limits are far beyond what you ever imagined,” O’Grady says. “You have the satisfaction of doing things you never thought you could do.” If you think a marathon is life changing, wait until you complete an ultra.

Christine Hinton is a Road Runners Club of America certified coach and fitness expert. A competitive runner herself, she has been coaching beginners through elites for 10 years.