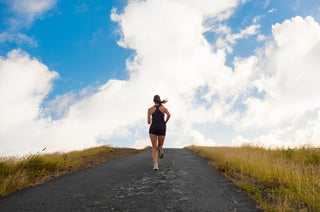 The Achilles tendon can handle hill running better than previously thought, according to researchers at Brigham Young University. Led by graduate student Katy Andrews Neves, a former collegiate runner that encountered her own Achilles issues while competing, the study, published in the Journal of Sports Science and Medicine, followed 20 female athletes that completed three separate treadmill 5K runs, each at a different grade (-6, 0 and +6), with 48 hours in between each run.

“Including downhill or uphill running gradually into training doesn’t seem to harm the Achilles tendon at all,” explains Neves. “There’s a lot of benefits to hill training, so basically the benefits outweigh the risks.”

None of the different grades put any extra stress on the Achilles tendon, which runs down the back of the lower leg. Thought to negatively affect the elastic structure of the tendon, hill running did not prove to harm the area if introduced slowly into a runner’s training regimen. Together with a professor at the university, Neves and her team measured the stress levels and changes in the tendon using Doppler ultrasound. The technique imaged the tendon across the various grades to measure any differences in stress. The Boston, New York City and London Marathons all include 6% grades along the course, so this research benefits those runners who may be concerned with the after-effects of charging those marathon race hills.

According to the study, 52% of runners in the United States have suffered or will suffer from an Achilles issue. However, the study did not address hill running as a treatment for an Achilles injury.

We Know You Want to Know: Does Running Build Muscle?