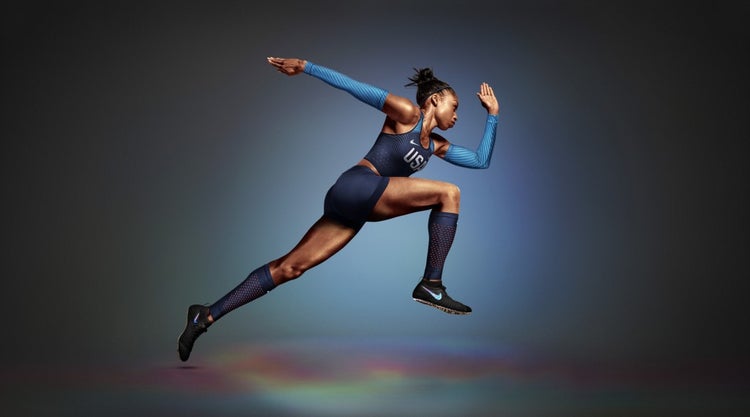 The USA Track & Field kits created by Nike for the athletes competing in the upcoming Olympic Games in Rio are engineered specifically for the fastest runners. Upon first glance you’ll notice the vibrant shades of red, white and blue, but when you look a little closer, you can see tiny little protrusions that look like tiny rubber spikes. These are Nike AeroBlades.

In fact, you may have noticed the AeroBlades on the uniforms of Nike athletes competing in the U.S. Olympic Track and Field Trials this month.

These small additions to the athletes’ uniform channel air around the athlete and reduce drag.

According to Nike, here is the idea behind the AeroBlades and how they function.

“Newton’s Third Law of Motion makes a compelling case: For every action there is an equal and opposite reaction, which means that an athlete’s speed is the sum of their applied force and the effect of the opposing force upon them. In the case of a runner’s pace, that contrasting agent is aerodynamic drag: the force that acts on any moving solid body in the direction of the fluid free-stream flow. Nike’s new symbiotic track and field speed system—customizable to the event and athlete—is expressly engineered to reduce that drag and maximize effort.”

The first time scientists and aerodynamicists at the Nike Sports Research Lab added textures to the team kits to reduce drag was in Sydney in 2000 with the Nike Swift Suit. For London 2012, they once again added textures in the form of nylon flocking. Both technologies were effective, but not nearly as effective as the AeroBlades.

Aeroblades won’t just be on the team kits. They’ll be on arm and leg sleeves and even on tape placed strategically on a runner’s body. The Nike AeroSwift Tape kit comes with event-specific instructions for athletes so they can customize the placement for their preferences. The designers used wind tunnel testing to determine where the tape should be placed based off the athletes’ shape, size and discipline. Track runners and marathoners alike may be seen wearing this tape while competing this summer.

360 YOU: How Sally McRae Defines Success and Strength For Herself