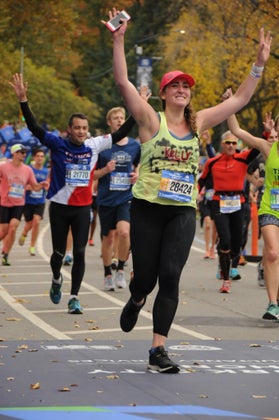 I went for my very first run on Thanksgiving Day back in 2012. I was drowning in grief and I hadn’t slept in 48 hours. I watched the sun rise and I felt like I needed to move so I grabbed my gym shoes, put on a few sports bras and took off. 30 seconds into my run, my lungs were on fire and I had to stop to walk but for some reason, I decided to keep going instead of turning around and getting back into bed. It took me well over an hour to run and walk 3 miles but by the time I got home, I was too exhausted to cry and I slept for the first time in 2 days.

This Thanksgiving marks my third runniversary and every year I can’t help but think back to how much has happened since that first painful run/walk. One thing I didn’t anticipate when I started running (besides how much I would eventually enjoy it) was how much running would change my life. To celebrate my third runniversary, I wanted to share 8 things that running has taught me about life.­­

Nothing is impossible if you’re willing to work for it.

I was never an athletic person. Running wasn’t just difficult for me, it was impossible. If someone told me that they ran for fun, I would think they were a liar and assume they were insane because for me, running was torture. I had always believed that in order to be a runner you had to be born a runner. When I first started running, it was awful, painful and intimidating. But as the weeks progressed, I could sense a change. Now I know that while some people are in fact born runners, other runners are made.

It’s OK if you don’t know what you’re doing.

Running a marathon was one of the scariest things I’ve ever done in my life because I didn’t know what I was doing. No amount of race day recaps or online articles could prepare me for what training for and then running 26.2 miles actually felt like. I had to trust my training plan and put in the work despite my doubts, excuses and fears. I couldn’t question whether I was doing it right or wrong, I just had to keep going. Running helped me realize that you can’t wait to figure some things out, you just have to jump in and figure it out.

Pain can lead to strength.
One of my favorite sayings is that ‘it’s in discomfort where change lives.’ This particular saying resonates with me because I’m the Queen of giving up or pulling back when the going gets tough or uncomfortable. But something clicked when I realized that the pain and discomfort I experienced when I ran meant that I was getting stronger both physically and mentally. It wasn’t that long ago that running a mile without stopping felt impossible. Five marathons later and I now know that pain really is only temporary.

Be proud your body.
I used to obsess about the way I looked, what I ate, and how much I weighed. My weight was heavily rooted in shame but running taught me that I’m much happier working towards a goal distance in lieu of a goal weight. When I’m training for and running a half marathon or a marathon, I feel empowered, strong and unstoppable! Becoming a runner helped me realize that I should be proud of how strong I am instead of longing for a skinnier frame. Strong beats skinny every single time.

Ask for help.
I used to believe that asking for help meant admitting defeat but that couldn’t be further from the truth. Asking for help takes courage, an open mind, and a desire to succeed. I would never have become a runner without the help, support, and advice from other runners. The running community is one of the most supportive, inclusive, and welcoming group of people in the world. There are no judgments, everyone is welcome.

Fail better.
Goals are wonderful because they give you something specific to work towards (and did you know that you’re twice as likely to accomplish something if you set a goal?) but sometimes, you are going to fall short. Does that mean give up? No! It means you take what you’ve learned and you try again! Failure isn’t something that you should ever be ashamed of. It’s like the old saying goes, if at first you don’t succeed try, try and try again. Take risks, fail better!

Pushing your limits requires patience.
One of the hardest parts about running is that it can often feel overwhelming or impossible. But pushing your limits requires patience because results don’t happen overnight. It’s a slow progression and you have to trust that the painful work you’re putting in will eventually pay off. All you have to do is work to be a tiny bit stronger than you were yesterday. But the day you’re able to look back and remember when your now easy workout was once a struggle will be one of the most rewarding days of your life. You just have to be patient.

Running isn’t the answer but it will help.
I started running as a way to run from my problems, I’ll be honest. I was desperate to find a way to believe in myself after I graduated from college. Running not only gave me a way to put one foot in front of the other, it gave me a way to contextualize what was going on with my life. It gave me a way to grieve the loss of my brother in a way that made sense and it helped me realize that running was a really productive way to manage my stress. There’s something about deliberately moving forward that reminds you that everything is going to be OK. It may not be the answer to all of life’s problems but there’s a good chance it will take you towards it.

If there is one thing I’ve learned, it’s that life isn’t easy. But it’s like Queen Oprah beautifully said, “Running is the greatest metaphor for life because you get out of it what you put into it.” It doesn’t matter if you want to run 20 minute miles or 5 minute miles, as long as you take the first step, you’re going in the right direction. Life may not be easy but there is always something to be thankful for. And on my third running anniversary, I am incredibly grateful that I found a way to fall in love with running. Until next time, #RunSelfieRepeat.