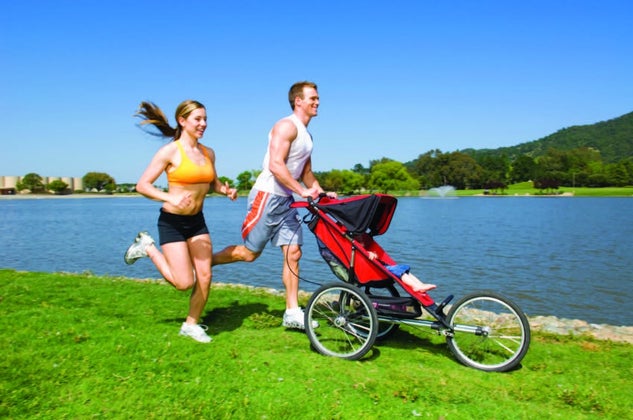 Women often lose 3 to 5 percent of bone mass during breast-feeding, says Dr. Bridget Quinn, from the Division of Sports Medicine at Boston Children’s Hospital. She stresses the importance of taking in calcium, vitamin D and protein. Get your fill with healthy choices, like Greek yogurt, lean meats and eggs.

Sally Bergesen, owner of women’s running apparel line Oiselle, makes use of the track to sneak in her workouts. “Let toddlers loose on the infield while you run around the track,” she says. “Scooters, bikes or a jump rope can entertain them in a pinch.” Then you can cool down with a game of tag. “You’re running around chasing your kids anyway,” she says. “Make it your workout and their play time all in one.”

There’s no way you can fit in every little piece of your training plan after baby says 2011 World Mountain Running Champion Kasie Enman. “There are certainly things that get compromised, like post-run recovery, warm-ups, all the little things,” she says. Dorothy Beal, owner of Mile Posts Endurance, says she’s learned to be flexible. “If my kids were behaving in the running stroller, then a 4-mile run may turn into 8 miles,” she says. “On the flip side if they just wanted to be home, I would cut a run short and not for one moment feel bad about it.”

“Biggest Loser” host Alison Sweeney trades off child care with her husband so they can both work out. “My husband and I make being healthy a priority,” she says. Bergesen, pictured, pairs up with a running friend and swaps the duties back and forth. “Have your running buddy watch the kids while you run, then switch when you get back,” she says.

Olympic marathoner Kara Goucher does easy runs while her husband pushes their son, Colt, in the stroller. “We try to make little short stops along the way and point things out to Colt, in the stroller ” she says. “For example, the last run we took we stopped to let Colt look at some cows. I did some stretching so the time was not wasted.” Farel Hruska, National Fitness Director for Fit4Mom, also advises finding other running mothers for social support. “The increased energy around the kiddos can be entertaining too,” she says. “Find an active group to join in your community, like Stroller Strides, where the camaraderie and child engagement is already built int the workout.”

Goucher has a rigorous training schedule. When she’s running, she says she focuses completely on running and doesn’t let thoughts of her son distract her. Then when she’s done with her workout, her son has her complete attention. “As soon as I get home, I am all about Colt,” she says. “I don’t think about running until it is time for my workout. Yes, I do sacrifice time with Colt for running, but when it’s Colt time, he has my full and undivided attention.”

Elite runner Nicole Teter-Down says she reminds herself to really enjoy her runs. “I have a fun playlist on my shuffle, and I could literally run for hours listening to good music on scenic trails,” she says. “I find it so peaceful to get out the door alone, away from the chaos of my mom life and just run. ” And when running with kids in the stroller, treat that time as a valuable experience as well, says postpartum specialist Dayna Kurtz. “A mother must be prepared to slow down or change course according to the child’s needs,” she says. “Running with my son is a separate activity from running by myself. And I cherish both.”