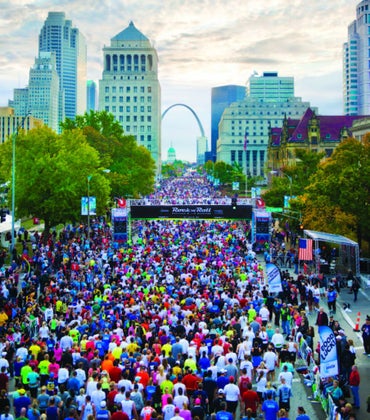 Lukewarm Gatorade. Depleted aid stations. Exhausted volunteers. For back-of-the-pack (BOP) runners, the final miles of an endurance race require strength. Not just the physical toughness to keep going, but the mental fortitude to gut it out on near-deserted stretches of road strewn with the paper cups left by faster runners.

Omaha, Neb.–based runner and triathlete Kirsten Case recalls one race: “The only people I saw were finishers headed to their cars, refueled and ready to get out of the cold, while I still had miles ahead of me.” Even if speed isn’t your forte, you can still have an amazing race with a little planning and bravery. Here are five strategies to kick butt at the BOP. Remember, you’re still beating everyone on the couch!

PICK THE RIGHT RACE FOR YOUR PACE.
Some races cater to everyone, while others are geared at competitive age-groupers. “Look for an event that’s got the attitude, culture and philosophy that suits you as a runner. “Some races have a competitive philosophy: ‘If you can’t finish, get off the course!’ That’s not wrong—it’s just a different approach to racing,” says Iris Simpson Bush, executive race director of Cincinnati’s Flying Pig Marathon, regarded as one of the country’s most BOP-friendly races.

Bush’s advice? Check race websites for course cutoff times before you sign up. Determine if you can make the cut, and research what happens if you can’t. Can you move to the sidewalk to finish your race once the streets reopen to traffic, or are you expected to jump into the sweeper bus?

Finally, check if walkers are welcome: That’s a sure sign of a BOP-loving event.

Related: If You Run Slow, Who Cares?

TRAIN YOUR MENTAL MUSCLES.
BOP runners may miss out on two surefire external motivators: lots of other runners to pace against, and big crowds of cheering spectators. For that reason, it’s important to cultivate your internal motivation, says Rejean Chiasson, head coach with Nike+ Run Club in Toronto.

“Go into a race with a game plan and stick to it regardless of the empty cheer stations. Stay in your head and don’t let the atmosphere get you down,” says Chiasson, who recommends using a well-curated playlist to keep you energized and focused. He also suggests repeating a personal mantra whenever self-doubt rears its ugly head—as it often will during mile 22 of a long, rainy marathon.

BRING YOUR OWN CHEERLEADERS (AND GU).
During a long, hard slog, a high-five from your best buds is an instant power boost. But for slower runners, the anticipation of seeing loved ones may come with worries about keeping friends and family waiting. “I don’t want people to be disappointed in me,” says Rachel Davidson, a Lillington, N.C.–based runner.

The solution: athlete tracking. If your cheer squad can anticipate your arrival at certain spots along the course, they can get there right on time.

KEEP YOUR EYES ON THE PRIZE.
During the darker moments of any race, every runner has to dig deep to remind herself why she’s out there. “I do not run to win; I run to finish. I know that I will not get an overall placing medal, or an age-group medal, but a finish medal. I remind myself during a race that I run for me and no one else,” says Colleen Kelley of Chicago.

In most cases, that’s enough to get her over the finish line, but Kelley recently discovered a bigger incentive: “My most recent race was the Chicago Half Marathon, which I ran with Team Breakthrough, the American Brain Tumor Association’s endurance team. I found it easier to finish, because I was racing for something bigger than myself or the medal.”

REMEMBER: DFL BEATS DNF BEATS DNS.
For those of us at the back, any race could, theoretically, be the one where we’re the Last Official Finisher and come in Dead Frickin’ Last.

Kirsten Case lived many racers’ worst fear at last summer’s HITS Twin Cities Triathlon, in Waconia, Minn. “I was the last finisher and it was well past the official cutoff time—and I felt like a million bucks! To go from being scared to complete a 5K [run] to completing a 70.3 [triathlon] was an amazing journey. I will forever be proud of this LOF.”

Run College: 6 Weeks to a Faster You Sprint and Hill Workouts

Run College: 6 Weeks to a Faster You Strength Training

Run College: 6 Weeks to a Faster You Course Introduction

Do This 600-Meter Breakdown Workout to Strengthen Your Fatigue Resistance