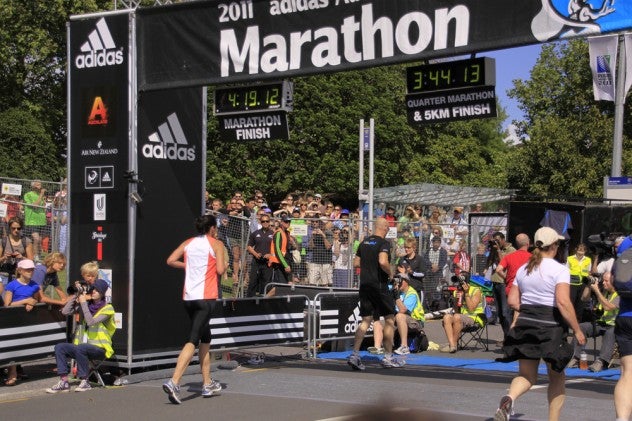 A road race is not like a formal dinner at Buckingham Palace. There aren’t a million different rules of etiquette that you must remember to avoid embarrassing yourself and annoying others. But there are some rules of proper conduct in running events, and if you are fairly new to the sport you might not be aware of all of them. So here’s a quick overview of the top 5 rules of the road.

1. Start Where You Belong

Nothing is more annoying to fast runners than having to weave through dozens of much slower runners in the first quarter mile of a race because those slower runners chose to line up at the front of the field. And for that matter, few things are more harrowing for a slower runner than being chased down by a stampede of faster runners whom they should have allowed to start in front of them.

To avoid contributing to this common scenario on either side, start the race in the appropriate position within the race field based on your speed. For example, if you anticipate finishing in the middle third, start there.

There aren’t many rules in road racing, but there are some, and it’s good to know them and crucial to obey them. In 2009, the women’s winner of the Lakefront Marathon in Milwaukee, Wisc., was disqualified for taking a bottle of water from a friend during the race. That’s against USA Track & Field rules. Download a copy of the USATF competition rulebook to find out what you can and cannot do on the course.

There are also event-specific rules, so be sure to check out the fine print on each event website before racing. For example, some events allow the use of iPods while others do not. Believe it or not, the second-place woman in the 2009 Lakefront Marathon, who was briefly moved up into first place after the original winner was disqualified for receiving outside assistance, was herself later disqualified when it was learned that she had illegally used an iPod during the race!

Here are some tips for a smooth mid-race drinking experience from someone who ought to know — Boston Marathon race director Dave McGillivray:

— As you approach each aid station, single out a volunteer who looks ready to hand off a cup that won’t likely be taken by a runner ahead of you before you get there. Aid stations are usually several tables long, so don’t feel compelled to approach the first table, where congestion is likely. On the other hand, don’t wait for the last table, either, so you have a second chance if you miss a handoff.

— Call out to the volunteer the name of the sports drink being handed out and make eye contact, so he or she knows you want it.

— Reach out for the cup two strides early rather than stabbing at it in the last moment to avoid a spill. Say “thanks” as you take the cup!

— Curl your wrist toward you and squeeze the top half of the cup to make a sort of funnel out of it.

— Upon completing an inhalation, swiftly quaff the contents of the cup (or as much as you want of it) in one clean gulp. Exhale forcefully with your next few breathes to help your breathing catch up.

— Throw the empty cup in a trash can if possible.

When the race is over, the need to practice good manners is not. While you are expected to stop running at the finish line, it is important that you continue moving forward — at least at a slow walk — so that the finish area does not become bottlenecked with exhausted runners standing around trying to catch their breath. This situation can become dangerous as other runners approach the finish line at high speeds like bowling balls taking aim at so many vulnerable bowling pins!

One last point of etiquette is to be as helpful as you can be to the race volunteers, who are there to take your timing chip or race bib tag. Indeed, perhaps the most important thing to remember with respect to road race etiquette is that these events would not happen at all if not for the event staff and volunteers who work tirelessly and all too often thanklessly to give us opportunities to run our best.

Matt Fitzgerald is the author of numerous books, including Racing Weight: How To Get Lean For Peak Performance (VeloPress, 2012). He is also a Training Intelligence Specialist for PEAR Sports. To learn more about Matt visit www.mattfitzgerald.org.