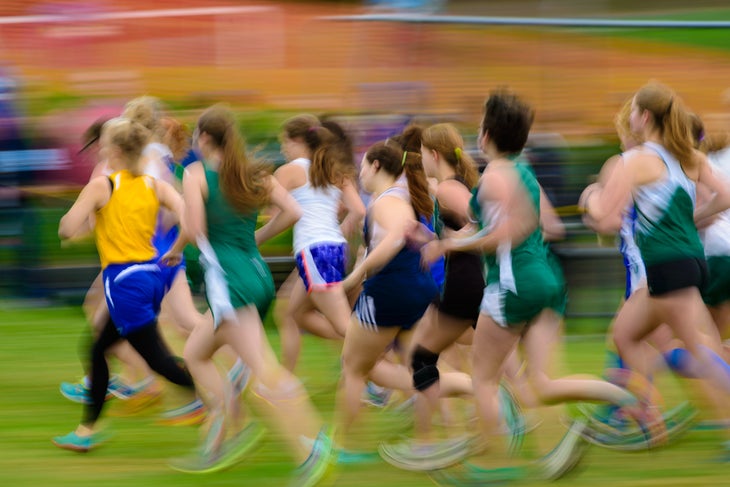 Running at any age is amazing! Need a little evidence? Just check out the six strong women on our March 2015 cover. We rounded up runners of all ages—from 16 to 61—who have just a few things in common: They rely on running to keep them feeling fit, confident and happy, and they plan on logging sweaty miles for the rest of their lives.

We took a look at what makes running special in every decade. We started with running in your twenties, thirties, forties, fifties and sixties. But great running habits start early. Here are some great tips for runners who are in their teens.

Teamwork makes the dream work.
Sports medicine practitioner Dr. Stephen Pribut says running as part of a track or cross-country team in high school helps uncover the benefits of working together toward a larger goal. “Fitting in and making friends is in the forefront of any teen’s mind,” adds physical therapist Heather Christain. What better place to get close than in a pre-race huddle?

Related: A Letter To My Young Runner Self

A+ in juggling.
Pro runner and WR blogger Stephanie Bruce says, “These are the years you’re laying down the groundwork for the habits of your life,”—aka prime time to practice goal setting, establishing realistic priorities and managing a busy schedule. Perhaps this is why the National Bureau of Economic Research found salaries of women who participate in sports in high school were 14 percent higher as adults—even when controlling for other socioeconomic factors.

Sidestep peer pressure.
The teenage years are tough for everyone—but they’re especially hard on girls. Our culture makes it extra-trying for females to maintain a healthy self-image as we navigate a path toward adulthood. Molly Barker, founder of Girls on the Run, believes running at this early age provides confidence. She says, thanks to sports, “I felt safe in my skin.”

Sit up straight!
“During the teenage years, girls spend an average of 6.7 hours sitting in a classroom and 3.5 hours of home-work on a daily basis,” says Dr. Chad Wells, chiropractor with The League Sports Rehab in San Diego. This sedentary behavior—not to mention the crazy heavy backpacks students lug around—leads to forward head carriage, hunched shoulders and spine. Wells adds, “Regular running promotes a more upright postureand lengthening of the hip flexors, counteracting the effects of prolonged sitting.”

Build a strong foundation.
According to Monique Ryan, nutritionist and author of Sports Nutrition for Endurance Athletes, running through your teenage years is linked to the development of a healthier reproductive system and stronger bones. In fact, adolescence is a peak stage for bone building, says Lauren Antonucci, nutritionist and director of Nutrition Energy in New York City. She recommends teens stay conscious of calcium intake through milk, yogurt, cheese and other Na-rich foods.

360 YOU: How to Unlock Your Potential and Level Up