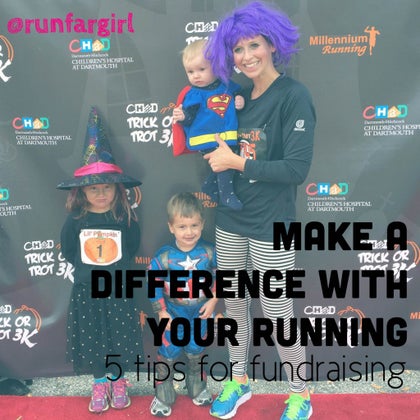 Ever since our son, Jack was born and we were informed he had a congenital birth defect requiring multiple surgeries, my running changed. During his first year of life we spent a lot of time at the Children’s Hospital at Dartmouth-Hitchcock (CHaD), the only children’s hospital in New Hampshire where we live. And while he’s a totally healthy and normal three year-old boy now, our time there changed me. I was struck by the fact that someone else paid it forward so that Jack could receive the care he needed when he needed it. And it was then that my running took on a whole new purpose. I wanted to make sure the care would be there for other families and little kids just like Jack. So I started fundraising for the CHaD HERO Half Marathon, a race event held every year as the hospital’s primary fundraiser.

When I started out in 2013 I had never fundraised before, mostly because I cringed at the thought of asking people for money. It felt so awkward to me. But there was so much emotion behind my reasons for fundraising that once I took that first step, it felt completely natural. In the last three years I’ve raised over $17,000 for the Children’s Hospital at Dartmouth-Hitchcock. And while I won’t pretend to be a fundraising expert here are a few tips I’ve learned along the way:

1. Set a goal. As with most things that seem impossible, start with a goal. Set a fundraising goal that is both realistic and a bit of a challenge. Keep that goal as your motivation as you fundraise.

2. Use ‘Snail Mail.’ Many fundraising platforms allow for you to send e-mails directly from the site with a pre-made template. But often these can end up filtered out of people’s inboxes and deleted. Opt instead for good old-fashioned snail mail. Craft a one page letter with pictures talking about why you’re fundraising, what it means to you and how people can help (including ways to help that don’t include donating money). If you can, enclose a donation form and a pre-addressed, stamped envelope so people can easily donate.

3. Host an event. Hosting an event like a benefit dinner can be a great way to raise a lot of money. Many local restaurants have “Benefit Nights” where they will donate a percentage of the evening’s sales to your cause. Some will allow you to host a raffle or silent auction as well. Pulling off an event takes a lot of leg work. Don’t be afraid to ask for donations to your raffle many local stores and attractions are willing to donate goods, services, tickets and more. And if you can’t pull off a fundraising event ask friends and families to have a yard sale where they donate the proceeds to your cause.

4. Put yourself out there. While social media can get a bad rap sometimes, it can be an incredibly powerful tool. Utilize Facebook, Twitter, Instagram and any other social media platforms you are a part of to promote your fundraising. Also consider contacting your local news media outlets, such as newspapers, radio stations and local television. Many of them are happy to do a story about you, your story and your fundraising cause.

5. Don’t be afraid to ask. Sometimes we assume that people don’t want to be bothered by fundraisers or that an organization or shop won’t donate to our cause. If there’s anything that fundraising has taught me it is to be bold and not be afraid to ask. You’ll be blown away by the generosity of individuals and organizations alike.

Read More About Charity Races:
How Do I Raise Money For Charity While Also Training For A Race?
2 Charity Half Marathon Training Plans