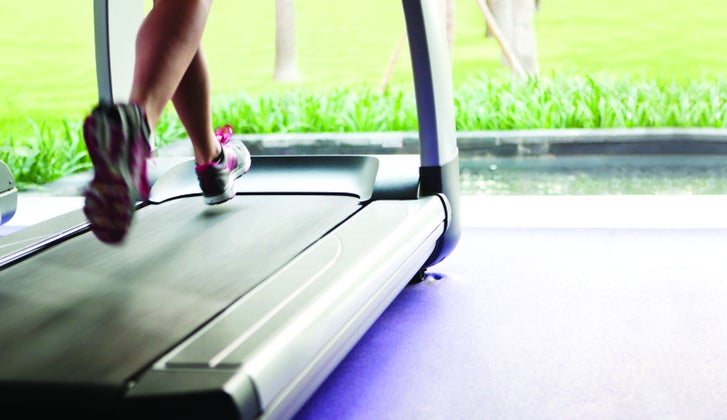 Treadmills deserve some love. They allow runners to train during bouts of bad weather. Plus, they’re useful for workouts that require precise manipulation of speed and incline. But let’s face it: Striding in place between four walls is not as invigorating as covering ground in the open air.

With the right approach, however, treadmill running can be almost as fun as a jog in the park on a beautiful day. The key to eliminating boredom while running on the ’mill is to tailor your workouts to the indoor environment instead of trying to replicate the sessions you do outside.

1. Coasting: Imagine your body is a car traveling down a hill. Mentally shift into neutral and allow gravity to carry you as you expend as little effort as possible. This teaches whole-body relaxation.

2. Running Against A Wall: Picture a wall six inches from your face. To avoid hitting it with your legs as you run, you must shorten your stride a bit and touch your feet to the ground directly underneath your hips. This cue corrects over-striding.

3. Running Quietly: Listen to the sound your feet make when landing on the treadmill. Now try to run more quietly. Don’t think about what your body is doing; just concentrate on the sound. This cue reduces impact forces.

4. Grip And Thrust: Imagine your treadmill has no motor. To move the belt you have to grip it actively with your foot as it lands and thrust it backward. This cue reduces ground-contact time.

5. Running On Rails: Imagine you are running on a pair of narrow rails. To avoid stumbling, you have to keep your feet perfectly aligned, your heels directly behind your toes. This cue corrects the common problem of internal thigh rotation (aka “knock knees”).

Head indoors easily and comfortably by following these tips for transitioning from outdoor running to treadmill time.

1. Sweat: Because it’s warm inside, you’re likely to sweat a lot on the treadmill. And because you’re not actually moving, most of that sweat is going to stay on your skin instead of evaporating. To avoid getting too soggy, place a tall fan nearby. Otherwise, keep a towel handy.

2. Shoes: A treadmill belt is a softer, more pliant running surface than pavement. For that reason you may be comfortable wearing lighter, less cushioned footwear.

3. Pace: If you were to run a 5K race on a treadmill, you probably would not PR. So don’t try to match your normal outdoor training times indoors. Lower your expectations just a bit to avoid pushing yourself too hard.

At any given pace, your heart rate is likely to be slightly lower on a treadmill than it is outdoors. Does this mean running on a treadmill is less difficult? Not exactly.

Research has shown that while running outside is more physiologically intense, it actually feels easier. When perceived effort is held steady, runners go faster outside, perhaps simply because they’re having more fun. Since runners are often able to work harder in the open air, outdoor running provides a slightly better workout, but the difference is miniscule.