These power women guide many of the NCAA’s top athletes to championships and podiums—here’s their advice for taking your own running to the next level.

*Outside memberships are billed annually. Print subscriptions available to U.S. residents only. You may cancel your membership at anytime, but no refunds will be issued for payments already made. Upon cancellation, you will have access to your membership through the end of your paid year. More Details

What does it take to reach the highest levels of collegiate competition? Genetic gifts and lots of training miles may help—but much more goes into leading talented athletes to optimal performances. Getting it right involves a focus on everything from recovery to strength training to the words you use to describe yourself.

We’ve tapped some of the top female college running coaches in the NCAA for their techniques that keep their teams running strong. Their insights can help you reach your own peak, regardless of whether you’re still in school or years past graduation.

Here are the experts helping you step up your game. 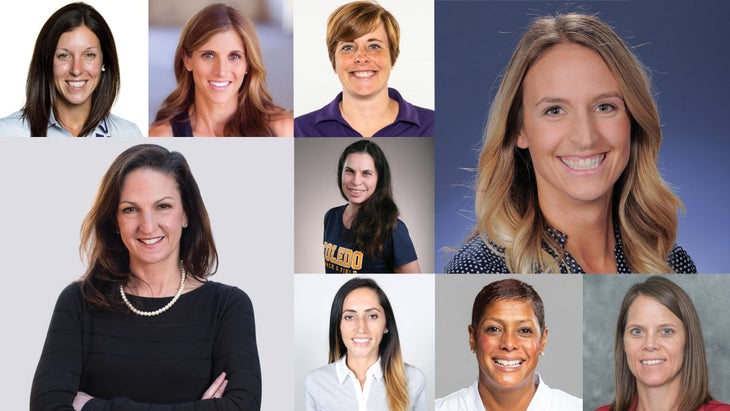 Student athletes have a lot in common with adult runners who aren’t pro athletes, Maurica Powell of the University of Washington says. Just as you’re likely juggling home, work, and family, they’re managing classes, exams, and plans for the future outside of running. They might run 75 or more miles per week sometimes, but Powell ratchets that down if they’re going through a particularly stressful period.

“Everyone has a finite amount of energy in her body,” she says. “With each athlete, we have to figure out, given the parameters of where we are and what she’s doing, what can she handle?”

After all, consistency matters far more to your running performance than high mileage or fancy workouts, Powell says. If you’re under-recovered, you risk injury, illness, or overtraining and the extended downtime those require. For instance, one of her runners—Mel Smart—went home to Australia when the coronavirus pandemic began. However, she was still taking 19 credit hours online, including three classes requiring her to log on in real time. That meant she was up at 2:30 a.m. telecommuting to bio lectures.

As a result, Powell suggested she run fewer miles and less intensity—closer to 40 instead of 45 to 48, with one hard session a week instead of two. Now, Smart aims for a long run on Sundays, when she doesn’t have classes. Powell used a similar tactic with one of her top athletes in her previous role at the University of Oregon.

The winter after helping the cross-country team win the 2016 NCAA championships, Maggie Schmaedick spent long days—and parts of many nights—studying for the MCAT. Knowing the stress and lack of sleep would sap her energy, Powell cut out her second daily runs and dramatically reduced her overall training.

After the test, Schmaedick ramped back up for strong indoor and outdoor track seasons, including competing in the 5,000 meters at the NCAA indoor championships the following March. And—she scored in the 99th percentile on the MCAT.

In the water, that is. Aqua-jogging allows injured athletes to maintain fitness, but it also ensures healthy athletes stay that way. On days Sara Slattery’s Grand Canyon University team runs hard in the morning, she has them hit the pool for 30 to 40 minutes in the afternoon. “The goal of this session is to flush out your legs from the morning workout and not have extra pounding,” she says. That way, they’re more refreshed for the next day’s miles.

For injured athletes mimicking a dry-land workout, Slattery converts the repetitions into time instead of distance, then reduces the rest period, because your heart rate recovers more quickly underwater. So 10 x 400-meter repeats on the track with one minute rest become 10 x 60- to 80-second intervals of hard aqua-jogging with 30 seconds of rest.

You can also jog in the shallow end. Just wear shoes so you don’t tear your feet up when you push off (her team repurposes old, lightweight running shoes, washed in the washing machine first).

Have a bad race? Take heart: All athletes—even collegiate champions—have moments that don’t go their way. The difference between crumbling and coming back stronger next time (or even within the same competition) comes down to how you react in the moment.

Take Amherst College’s athlete Nicky Roberts. She headed into the 2017 NCAA Division III Cross Country Championships coming off a back injury, and then she fell down a half-mile into the 6K race. But she stayed calm, got up, and battled back from last place to finish fifth.

Coach Cassie Funke-Harris makes it a point to highlight these comebacks to the whole team. “Then when you’re in that really high-pressure moment or that new situation and something crazy happens,” she says, “you can say, either I’ve seen this be OK for myself, or I’ve seen this happen to somebody else and it turned out all right.”

You can do your own post-race analysis in the same way. Say a fellow runner elbows you or you’re late to the start corral. If you freaked out and made the situation worse, not better, reflect on that—and what you could do differently next time. “You’ve got to get that under control and focus on the task at hand, the things you can control,” Funke-Harris says.

“You can’t undo this thing that just happened to you. All you can do is whatever the next thing is. Just keep taking it one chunk at a time.”

Each Sunday by 7 p.m. during the season, the NC State women submit their electronic logs to head coach Laurie Henes. Some athletes list only their mileage and the specifics of their workouts in these routine logs; others use the record as more of a journal, recording how they felt and what else they were going through in life during each day and week.

Henes doesn’t force her team to be eloquent, but she says the more detail a runner includes, the richer the insights. “It’s nice to have some history to go back and look at, when you’re kind of struggling or when you’re feeling great, to see what worked for you before,” she says.

For instance, this spring one of her athletes had a few reduced-mileage weeks due to a minor niggle. When the runner looked back at her log, she remembered she was in a similar scenario at the end of her freshman year—she’d missed three weeks of May altogether with a hip injury. But after rehabbing it, she came back to have a breakthrough cross-country season in the fall. The realization eased her mind and gave her confidence she could overcome her obstacles this year, Henes says.

Yes, Sarah Haveman’s title is cross-country and track coach at the University of Illinois. But she doesn’t just coach runners—she coaches athletes, she stresses. “We are a sport,” she says. “We are not distance runners, we are distance racers, and we’re in the business of beating people.”

To do it, they’re not just logging long miles—they’re throwing medicine balls, running hill sprints, and doing Olympic lifts in the weight room. This emphasis on athletic development keeps her team healthy and competitive all year round, from cross-country in the fall through indoor and outdoor track in the spring and summer.

She recommends the same well-rounded approach to athletes at any level. Incorporate strength-training and cross-training, as well as proper nutrition and recovery. “Look at yourself as a universal holistic human,” she says. “It’s not just, ‘I’m running a marathon,’ it’s, ‘How do I prepare my body to run this marathon or 5K?’”

In addition to putting yourself to work, positive self-talk is a powerful tool to use in tough moments. Andrea Grove-McDonough advises her University of Toledo runners to pick a simple word or phrase that works on repeat. One that tends to resonate:

Give Yourself a Job

Any runner knows the feeling. It’s late in the race. The finish line seems to grow ever farther away. Your legs burn, your breathing is labored.

Grove-McDonough would tell you the same thing she told her 2014 Iowa State University team, the runners-up at the NCAA Cross Country Championship: “Focus on something else besides how you feel,” she says.

To take your mind off how hard you’re working, assign yourself a specific task. Maybe it’s to catch the runner in front of you, or halve the distance between you by the next half-mile, or to hang with the pack you’re tucked into for five more minutes. These responsibilities refocus and re-energize you so you can keep up your pace.

At SMU, ‘A Havahla Haynes’ athletes don’t just study for class. At practice, they grab resistance bands and attend what she calls “glute school”—performing small-but-mighty movements that target the muscles in the hamstrings, hips, and butt that stabilize them while running. Jumps and balances also train the neuromuscular system, ensuring those muscles fire at precisely the right point in your stride.

Doing just 5 to 10 minutes of these types of exercises daily, three times per week, will produce notable results, she says. Mix and match the moves you choose; the more directions you incorporate into your routine, the more you increase your resistance to fatigue at the end of a long run.

Slattery’s a huge believer, and practitioner, of strength training (check out her Insta feed for pics of her squatting her two kids, Steven and Cali).

For the biggest strength gains, Slattery has structured sessions so that her team lifts heavy on the same day as hard running workouts. This trains them to hold their form when they’re fatigued. And, it keeps easy running days completely easy, allowing more time for recovery.

Low on motivation? In her USC athletes, Caryl Smith-Gilbert has noticed eroding enthusiasm often isn’t a psychological failure, but an early warning sign of overtraining. “Stress and fatigue will make you feel like you don’t want to run, but really, you just need some rest,” she says.

The minute you start to lose your mojo, schedule a recovery week—say, running two days instead of five, and even booking a massage or other soft-tissue work if you’re able. “A lot of times that whole ‘I want to quit’ feeling goes away,” she says.

Whether you have a coach or not, you don’t have to limit yourself to a single source of running information. Instead, form your own board. “For me, it is a cumulation of coaches, other athletes, and individuals involved in the sport that you have as a constant resource for information,” Amy Rudolph of Iowa State says.

This doesn’t have to be complicated; this board could consist of a few runners with a bit more experience than you. Ask this core group of trusted sources questions about things like training, nutrition, and injury rehab for a real-life perspective on what you read and see on social media. It’s something Rudolph recommends to her athletes—and a strategy she employed herself during her 13-year professional career, which included two Olympics and four world championships in the 5,000 meters.

Her own council included fellow Olympians like Deena Kastor, Jen Rhines, and Carrie Tollefson. Even if yours aren’t quite so elite, building a strong group of fellow athletes to bounce ideas off not only offers you feedback on how to reach your goals, it also builds you a network of friends who will cheer you when you get there.