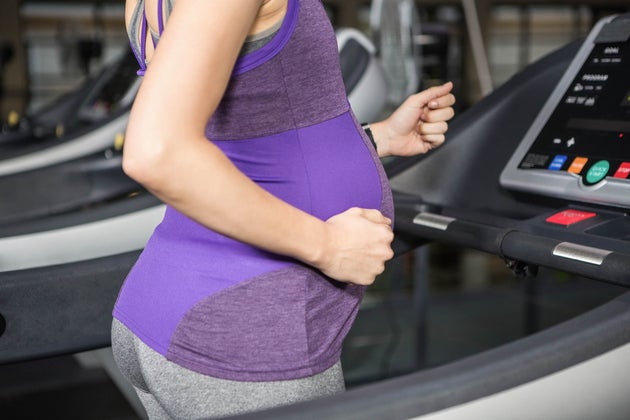 *Courtesy of Rachel at Go & Glow

Some people think I’m a little crazy when they learn I ran a marathon less than five months postpartum. Or that I ran another marathon after that—10 months postpartum—where I qualified for the Boston Marathon. I also work full time.

While I don’t recommend training for a marathon within months of giving birth to just everyone­­ running any distance, even a 5k­­ can be attainable for postpartum women. Women’s bodies have been through a lot over the course of pregnancy, delivery and recovery, so is it really possible to bounce back, in the form of running a marathon AND getting a new PR? There is no dirty secret; it just takes work, some careful planning and the will to run whatever distance you set out to accomplish.

So how did I go from couch to marathon in just a few months?

1. I was a runner before I became pregnant. I was a pretty avid runner before I got pregnant­­, running 4­5 miles a week (sometimes more). During pregnancy (with approval from my doctor), I cut down my running to 2­3 miles a week until I was about 6 months. For the remainder of my pregnancy, I walked and swam nearly every day. So while I wasn’t able to run until I was about 7 weeks postpartum, I already had proper running shoes, knew how to create a training plan that worked for me and jogging for half an hour didn’t seem too crazy.

RELATED: What It’s Really Like To Return To Running Postpartum

2. I took it slow. Really slow. Being active helps you know your body inside and out, as you have a better sense of your body’s limits and what feels good. During pregnancy, you learn even more about how amazing the human body is, even if there are times when it may be quite uncomfortable with your ever expanding shape. Postpartum, you get a crash course on knowing just how tired one can be, with round­-the-­clock care on top of the physical healing and emotional exhaustion. Just because your doctor may have “cleared you” for exercise also doesn’t mean you are ready to run at your old pace. You may be too tired to run, or you may find yourself still sore in places you never were sore before. When I went for my first postpartum “run”—it was more like a fast run/walk—I had to ice my lady parts after as I was still healing!

3. I embraced my (new) body. Being pregnant for nine months and then giving birth changes your body in so many ways. While I lost the weight I had gained during pregnancy very quickly, my body was not the same body I had run in before I was pregnant. My joints were looser, I was still recovering from the injuries sustained in childbirth, my stomach was squishier than I had remembered and my breasts were bigger and swollen thanks to breastfeeding. This meant I had to wear two sports bras, take even time to stretch or ice areas that were sore, and above all, tell myself that my body was strong and amazing no matter what exercise I did or didn’t do. I was a new mom and I had to embrace and accept my new body, not fight it.

4. I did my kegels. Before pregnancy, during and after.

5. I established a new pre-­run routine. Gone were the days where I had an uninterrupted schedule. I exclusively nursed my son, so before a run, I nursed him (or pumped) before heading out the door. During my longer runs, I had to carefully plan when I would pump in the days prior, as to arm my husband with a supply of milk. [A note about breastfeeding and exercise: never once did my running ever affect the taste or my supply of milk; there is plenty of research that indicate it is perfectly safe for mother and baby]. I often have my running attire laid out (or already on) so I can dash out the door and when I did end up running the marathons, before the race, I had to wake up even earlier to breastfeed and/or pump.

6. I was open to schedule changes. Pre­-baby, I would always run first thing in the morning. But babies are unpredictable, so there were days that my son would be awake earlier than expected, or would want to feed around the time I was planning to go for a run. I soon realized that I had to have different backup options for times I could run, or if I only had 45 minutes instead of 90, I would need to adjust my training accordingly.

RELATED: 10 Truths About Training For A Marathon Postpartum

7. I was prepared for setbacks. My first initial runs were done very slowly, as I wanted to give my body some time to get used to running. Like any training plan, I gradually increased intensity and duration. However, there were a few times that it was still too much, too soon, and my childbearing injuries flared up. My healing was first priority, so I had to take the time I needed to recover, even if that mean scaling back.

8. I created a simple training plan. Once I had established a comfortable base mileage enough to start my marathon training, I created a very basic plan. I essentially had to treat my training as if I were a novice, because I was running with a different body than I had been in my previously. Practically, I also didn’t have as much time to dedicate to running as I previously did, so running five or six days a week was not going to work. I also didn’t want to risky injury of any sort, so it was critical that I didn’t overtrain or push myself too hard.

9. I took it day by day. With each week that lead up to the race, I took it one run at a time, with particular attention to my longer runs. As I gradually increased my weekly mileage, every long run felt like I was completing the marathon itself. When I completed my first double digit run, I felt like a million bucks. Pre-­pregnancy, running 10 miles was just another “medium” run for me, but post­partum, I felt like Super Woman. I also signed up for a mid-­distance run halfway through my training, and when I finished at a faster pace than expected, it was another Super Woman moment. Having smaller goals within the larger goal create great mental boosts.

10. I have a supportive partner. Before I started to train for the marathon, I had a discussion about my training plan with my husband, who from the beginning, was fully supportive of my goal. He knew I needed to run a certain number of times each week, and for the longer runs, he knew he would need to take care of our son for a few hours when I was away. He encouraged me every step of the way, and told me he was proud of me even if I couldn’t complete my training. I couldn’t have completed my training without his help ­­and his support.

All this I learned over the course of my 12-week training for my first postpartum marathon. And I definitely had some ups and downs. There were a few times where I missed a mid­week run, or I had less time than I had planned for to do a run, and had a few moments where I doubted myself. But as my mileage increased, my confidence grew. I felt strong and powerful. Once race day arrived, I felt ready, but nervous. I reminded myself that I had given birth, so running a marathon wouldn’t be so difficult. It was my reward for my hard work. And what a reward it was; ­­the miles flew by, the course was beautiful and this time, more than ever before, I felt the crowd’s support for women runners. “Go girl!” I heard many times, and go I went. When I finished, it turned out that I also (miraculously!) PR’d. I think it’s because I hadn’t put too much pressure on myself from the get­go, and while my training was minimal but sufficient, it wasn’t just my body that was stronger­­it was my will and endurance that was transformed.

A few months later, I ran another marathon, which I ended up crushing my previous PR and I qualified for the Boston Marathon. During my training the second time around, I had more of an intensive schedule; I owe a lot to motherhood to knocking out these PR’s. Motherhood makes me be a better runner, and running makes me a better mother. Running may make us physically strong, but being a mother and a runner taught me more about patience, endurance and finding balance than ever before. Believing in yourself is key, no matter what physical challenges are ahead.

So to my fellow mothers out there who thinking about bouncing back—whatever that means to you—go girl.