Transcend society’s obsession with size and find your ideal weight for peak performance and optimal health.

Surfer Catherine Lippincott’s moment of revelation arrived on a wave in Hawaii. A former plus-size model, she’s proud of her body and participates in a wide range of sports.

But every time she surfed in California, she felt the which-of-these-kids-is-not-like-the-other vibe next to all those tiny West Coast surfer girls.

“Before Hawaii, I was always the biggest girl in the water,” says Lippincott, who picked up surfing about four years ago. But on the boards and beaches of the island paradise, she noticed a big difference. “Hawaiian surfers are so diverse. A lot of them are not small, and they all surf well,” says Lippincott, 44. She now embraces that part of herself, the athlete, who has kept her body fit and strong. 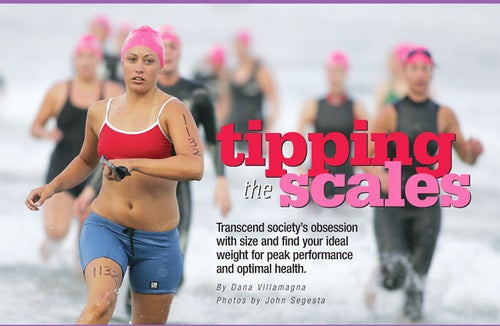 There was a time in history when images of women like Lippincott were celebrated as powerful, athletic, beautiful and, yes, feminine archetypes. Take Athena, the Greek goddess of skill and wisdom, who was depicted with a thick, strong body and revered in mythology and art.

Not so in modern America. Pop culture’s ideal female body continues to shrink on the runway and in magazines. Athletes also suffer from their share of stereotypes—the skinny runner, the long-legged ballet dancer. But there are women defying the stereotypes and proving that you can be healthy and athletic at many sizes.

The women who make up the 150 pound-plus USA Triathlon (USAT) Athena racing class, which was formed in the late 1980s, are living proof that there’s no one mold for an athlete. Athena-division national champion Molly Holmberg says racing in this class has proven to her that small and thin is not proportional to athletic success.

Living and training in Boulder, Colo., I see so many thin women athletes. You begin to think that is the only way of being fit,” says Holmberg, 29. “But for many strong and accomplished women, the issue is maximizing your strength and endurance according to how your body operates.

Holmberg recalls that when she was thinner than her natural build, during her years as a collegiate soccer player, she wasn’t as strong or healthy as she is now at 5 foot 8 inches and 150 pounds.

And sponsoring an Athena class, say USAT officials, has created opportunities for women who may not otherwise try triathlon. “Having an Athena division gives women the opportunity to compete in an environment that lets them feel comfortable and promotes overall great health,” says Athena triathlete Debbie Bjornson. “This sends a message to women that it doesn’t matter if you are 150 pounds or 200 pounds, you will be supported if you try.”

But even powerful, peak-performing women sometimes have body image hang-ups. “It took a lot to admit I was more than 150 pounds,” says top Athena athlete Christy Bergin. The first time she placed at a race in the Athena class she was embarrassed to get up in front of the group and accept the award.

That type of body size anxiety doesn’t surprise psychology professor Denise Martz, who studies what she calls “fat talk,” the social norm among American women to point out their body flaws. “It’s a struggle to break away from the cultural issues and just be an athlete,” says Martz.

The bottom line: Every body is different. And a number on a scale doesn’t paint an accurate picture of overall health or fitness. Far more than weight, markers like cholesterol, blood pressure and blood sugar are accurate indicatorsof your health. Aim for a total cholesterol reading of less than 200 milligramsper deciliter of blood (mg/dL), a normal blood pressure of 120/80 or lower anda blood sugar level lower than 100 mg/dL. Healthy lifestyle choices like diet and exercise will help you meet those markers.

Your doctor may also check your weight against the Body Mass Index (BMI) chart—this tool determines if you are overweight based on age, height and weight. Generally, a normal range for healthy weight is 18.5 to 24.9. But BMI may not be the gold standard of healthy weight information for everyone. For example, BMI results can be skewed by muscle mass, causing a female athlete to interpret her BMI result to mean that she should lose weight, when that may not be the case.

The proportion of your waist size to your hip size, called waist-to-hip ratio (WHR), appears to be a better indicator of certain health risks, including heart attack, than BMI. Dividing the circumference of your waist by the circumference of your hips shows where you store fat. The more fat stored around the waist, the more chances for weight-related health problems. WHR should be at or below 0.8.

Barring any medical conditions such as thyroid imbalances or medication side effects, by exercising regularly and eating a healthy diet based on whole grains, fruits, vegetables and lean proteins, it’s normal to fluctuate within a 10-pound weight range. But to determine how healthy you are, keep track of your energy levels, how well you are performing athletically, and periodically check your standard health markers with your physician. That way, the numbers on the scale won’t matter as much.

Some athletes look for a performance boost through unhealthy weight loss. These athletes may tell themselves, or be erroneously told by a coach, that if they lose weight they’ll perform, look and feel better, even if their current weight is within a healthy range. This problem has become so common among younger women athletes that there’s a specific medical term coined for the condition: Female Athlete Triad.

When female athletes don’t eat enough to match their energy output, they can develop eating disorders, cease to have menstrual periods and increase their risk of osteoporosis.

Dana Villamagna, a Wisconsin-based freelance journalist, thanks all of the amazing Athenas who contributed to this article.