Make over your diet with these must-have foods for female runners.

The most recent slew of studies suggests that what you toss in your grocery cart can improve performance, prevent injury and bestow various health benefits. And certain foods can do all this while meeting the unique nutrition needs of women runners. We chewed our way through the supermarket to suss out foods that should be a staple on every woman runner’s menu.

Women runners are notorious for poor iron levels due to inadequate intake and losses from exercise and menstruation. “Because iron is needed to deliver oxygen to the brain and muscles, low levels can impair aerobic capacity and leave you feeling drained, sluggish and run down,” says Molly Kimball, a sports dietitian at Ochsner’s Elmwood Fitness Center in New Orleans. Beef has significant levels of highly absorbable iron as well as top quality protein. According to Kimball, runners of the fairer sex should strive for 0.75 grams of protein per pound of body weight to support training. Three ounces of steak dishes out about 18 grams. Consider going against the grain and splurging for rass-fed cuts. Compared to grain-fed beef, grass-fed beef often has less saturated fat yet more omega-3 fats, vitamin E and con- jugated linoleic acid (CLA), which studies report may help shed body fat. Plus, levels of dangerous bacteria including E. coli are lower in beef raised on pasture. Look for the label “100 percent grass-fed and finished” or the green American Grassfed logo, which guarantees no antibiotics or hormones were used on the cattle. If you can’t find grass-fed beef at your grocer or butcher, go to eatwild.com to find a local supplier.

To help stiff or sore joints move easier, try popping a handful of pomegranate seeds. Studies have honed in on the antioxidants in this juicy red fruit and its ability to suppress pro-inflammatory compounds associated with joint problems. “A diet rich in antioxidants can help to minimize a runner’s muscle soreness and enhance recovery after a training session by knocking out free radicals,” says Kimball. What’s more, California researchers found that ellagic acid, a predominant antioxidant in pomegranate, may suppress breast cancer cell growth. For extra fiber to help dull hunger, choose the seeds in these red orbs over juice. Other fruits with a plethora of antioxidants include red grapes, blueberries and tart cherries.

Pomegranate Parfait
Try this: To concoct a parfait, place a dollop of plain yogurt in the bottom of a glass. Top with some granola and pomegranate seeds. Repeat the layers and top with a drizzle of pure maple syrup.

Too many female runners shy away from high-fat foods like nuts, seeds and oils because of calorie concerns. But fat phobia can set you up for a sidelining injury. A 2009 University at Buffalo investigation discovered that female runners who suffered more lower body injuries, including stress fractures and tendonitis, consumed significantly fewer calories from fat than non-injured runners. “Too little calorie and anti-inflammatory omega-3 intake to support training, along with reduced absorption of fat-soluble vitamins, may weaken muscles and joints, says Florida-based sports dietitian Tara Gidus. According to Gidus, female runners should obtain at least 20 percent of their daily calories from fat, with an emphasis on healthy sources such as almonds, olive oil and avocado. As for those worries about bulging bellies, Harvard researchers found that women who regularly consumed nuts were less likely to pack on the pounds over an eight-year period than those who abstained. The synergy between the healthy fat, fiber, vitamins and minerals could prevent weight gain.

Spicy toasted Almonds
Try this:
For a satisfying snack, heat oven to 350 degrees. In a medium bowl, combine 1 tbsp. chili powder, 1 tbsp. olive or canola oil, 1/2 tsp. kosher or sea salt, 1/2 tsp. cumin, 1/4 tsp. cinnamon and 1/4 tsp. black pepper. Add 2 cups almonds and toss to coat. Transfer mixture to a baking pan and bake for about 10 minutes or until almonds are toasted, stirring a couple times. For portion control, limit your intake to only 1-2 ounces.

A 2010 study published in the American Journal of Clinical Nutrition, which tracked more than 89,000 subjects over a period of 6.5 years, discovered that women who consumed the most fiber were more likely to have trimmer waistlines. “Fiber helps in the battle of the bulge because it keeps you full and prevents overeating,” says Gidus. Women are encouraged to shoot for 25 grams of fiber daily. And with a whopping 16 grams per cooked cup, lentils can help you get there. Lentils are also jam-packed with protein, iron and B vitamins. “The body uses B vitamins to generate energy to sustain running,” notes Gidus. As a bonus, lowbrow lentils are ridiculously cheap and much faster to cook than beans. To cut down on sodium intake, use dried lentils more often. 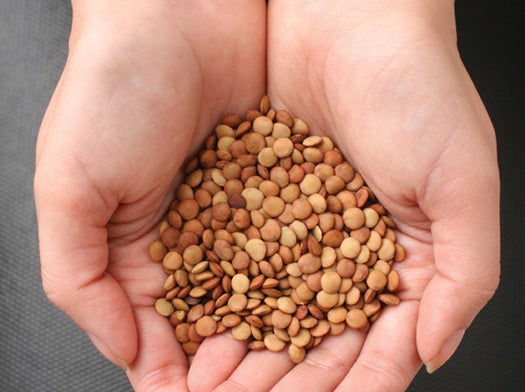 A female runner’s bone density can be 10 to 15 percent lower than normal. Whether pink or sockeye, canned salmon is brimming with the calcium and vitamin D necessary for strengthening bones. According to a 2010 study published in the British Medical Journal, women who supplemented with both were up to 16 percent less likely to suffer bone fractures. “Vitamin D is necessary for calcium absorption and maintaining optimal blood levels of calcium to minimize bone breakdown,” says Kimball. Less pricey than fresh salmon, the canned version contains just as much omega-3 fats. “The anti-inflammatory properties of salmon’s omega-3s are useful to runners not to mention the many other health benefits, including reduced risk of heart disease and depression,” Kimball says.

Salmon Loaf
Try this: In a large bowl, mix 15 ounces of canned salmon with 1 cup bread crumbs, 3/4 cup milk, 1 beaten egg, 1 chopped onion, 2 shredded carrots, 1 shredded zucchini, 1 tbsp. curry powder, juice from 1/2 lemon, and pepper to taste. Add mixture to a greased loaf pan and bake for 40 minutes or until loaf is set in the center. Serve with salsa.

Daily training takes a toll on the immune system—runners are prone to colds and upper respiratory tract infections. But recent research suggests that friendly critters like those in yogurt can keep you out of the Kleenex box. A 2008 study in the British Journal of Sports Medicine found that distance runners who took daily probiotic bacteria supplements increased the activity of their immune-boosting T-cells and cut the length of time they experienced upper respiratory tract infection symptoms by more than half. Yogurt also contains a great mix of carbohdyrates and protein that working muscles need plus more bone-building calcium than milk. Kimball suggests seeking out thicker and creamier Greek-style yogurts, which contain up to twice as much protein as standard yogurts. To keep a lid on your intake of added sugars, choose plain yogurt and add nutritious sweetness in the way of fresh fruit.

Secret Weapon: Vitamin A and C

A serving of this jaunty nutritional overachiever contains more than a day’s worth of vitamins A and C, “two vitamins that women need to maintain a healthy immune system,” says Kimball. Researchers at The Cancer Institute of New Jersey conducted a review of studies and reported that increased intakes of vitamin C and beta-carotene (the precursor to vitamin A that is abundant in kale) can reduce uterine cancer risk in women by 12 and 15 percent, respectively. Vitamin C is also required to make collagen, an important structural component of tendons, ligaments and bone. Kale’s ascension toward nutritional sainthood is further bolstered by huge amounts of vitamin K needed for proper blood clotting and bone health. Plus, kale is rich in the antioxidant duo lutein and zeaxanthin, which accumulate in the retina to help protect against vision loss. According to a recent Centers for Disease Control and Prevention report, only about 14 percent of American women are eating the recommended three servings of vegetables daily. Read: Eat loads of kale!

Baked kale Chips
Try this: To make kale chips, tear the leaves off the stems of 1 bunch of kale and cut into bite-size pieces. Toss with 2 tsp. oil and sea salt to taste. Spread them out onto a baking sheet. Bake for 12 to 15 minutes or until just crisp.

A sacred source of strength for the ancient Incas, quinoa offers a hearty helping of complex carbohydrates, which helps reload your muscle glycogen stores (your most important energy source during exercise) after a run. “Compared to other grains, quinoa has higher quality protein to help encourage post-exercise muscle recovery,” adds Gidus. Studies suggest that women who trade in refined grains such as white pasta and rice for more nutrient-rich whole grains like quinoa have lower rates of heart disease and breast cancer and are less likely to become overweight. Quinoa also contains a wealth of magnesium, an often under-consumed mineral, which appears to act as a deterrent against diabetes by improving insulin sensitivity. On top of its nutritional might, quinoa cooks up in half the time as brown rice. You can now find quinoa in many supermarkets and health food stores.

Apple Cider Quinoa
Try this: In a saucepan, combine 2 cups of apple juice or apple cider, 1 cup quinoa and 1/2 tsp. cinnamon. Bring to a boil, reduce heat and simmer until all the liquid has absorbed, about 10-15 minutes. Serve as a sidekick to fish, poultry or grass-fed beef as part of a post-workout meal.

Matthew Kadey is a Canada-based dietitian and food writer. Find him at wellfedman.com.