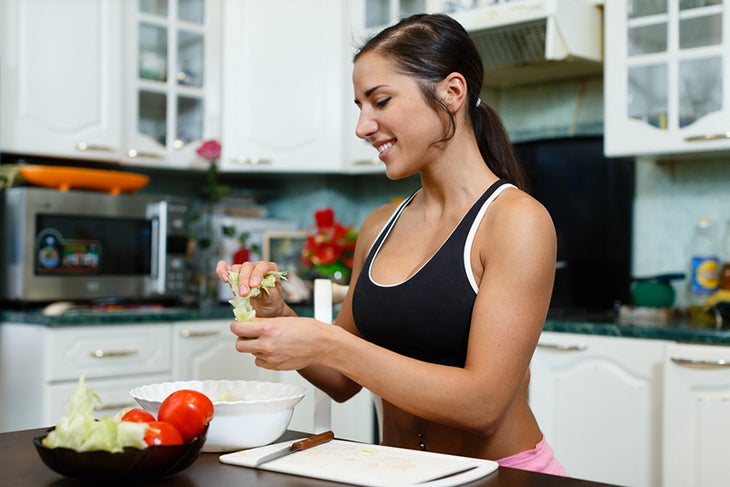 Tis the season to worry about weight gain. According to research, most adults add a pound or two between Thanksgiving and the New Year. This phenomenon is blamed on seasonal changes in diet. Runners, though, have an additional reason to worry about weight gain. For us, the holiday season is also the off-season—the time of year when we are not actively preparing for races and are therefore burning fewer calories through exercise.

Worrying about weight gain naturally leads to thoughts about how to prevent it. These thoughts, in turn, are based on beliefs or assumptions about what causes weight gain. That’s where things get tricky. There is much disagreement about the core cause of weight gain in our public discourse. One faction argues that weight gain is caused simply by eating too much. The other faction contends that it’s not how much but what you eat—particularly carbs or fat—that matters. Who is right? The answer will help you avoid gaining weight during this holiday/off-season.

A Calorie is a Calorie

The idea that how much people eat is more important than what they eat where gain is concerned is summed up in the expression, “A calorie is a calorie.” Proponents of this view argue that if you eat too much of anything, you will gain weight, and that changing what you eat won’t cause you to lose weight unless the changes reduces the number of calories you consume.

Among the experts who encourage people to focus on how much rather than what they eat is Brian Wansink, author of “Mindless Eating.” Wansink’s research has shown that many people today eat food not because they’re hungry but because it’s there. If we simply pay more attention to what we’re doing and avoid eating more than necessary to satisfy our hunger, we can reduce our daily calorie intake by up to 20 percent and lose weight without changing what we eat.

John Cisna has demonstrated real-world proof that this approach can work by losing 56 pounds in six months eating nothing but McDonald’s. He pulled it off by limiting his total daily energy intake to 2,000 calories. You might assume that respecting this ceiling required him to avoid French fries and load up on salads instead. In fact, Cisna ate everything on the restaurant’s menu and had at least one serving of French fries almost every day.

Yet there are clear limits to the notion that all calories are the same. Most people who succeed in losing weight do make changes in what they eat, and there is plenty of science showing that it is possible to lose weight without making any conscious attempt to eat fewer calories if the right changes in food choices are made.

In a study performed at the University of Washington, overweight women spontaneously began to consume 441 fewer calories per day, on average, when their protein intake was increased to 30 percent of total calories. As a result, they lost weight despite not making any conscious effort to eat less. The reason is that protein is more filling than other calorie sources (carbohydrates and fat). Also, high-protein diets increase the body’s metabolic rate, so more calories are burned throughout the day.

However, loading up on protein isn’t the only way to lose weight without consciously reducing calorie consumption. In 2015, researchers at the University of South Carolina reported that volunteers placed on a vegan diet for six months lost an average of 7.5 percent of their initial body weight without making any attempts to eat less. In this case, dieters received more of their calories from vegetables and other foods that have a high content of fiber and water, which made them more filling than other foods, calorie for calorie.

If you want to see for yourself that all calories are not the same, try this experiment: At noon tomorrow, eat 500 calories worth of French fries or one large order of fries. Then at noon the next day, eat 500 calories worth of apples; that’s five and a half apples. In the unlikely event that you’re able to force down that much red delicious, you won’t want dessert, whereas you’ll still be hungry after eating the same caloric order of fries

The second of these sub-factions has been making the most noise lately. Among its more vocal advocates is Gary Taubes, author of “Good Calories, Bad Calories,” who argues that carbohydrates cause weight gain by increasing insulin levels in the body. Insulin “traps” fat in fat cells, and as a result, a high-carb diet causes more weight gain than a low-carb diet with the same number of total calories.

Except it doesn’t. Science has never supported the insulin theory of weight gain, and the best and latest science emphatically contradicts it. Most recently, a study published in Cell Metabolism reported that a carefully controlled low-fat diet resulted in 68 percent more body fat loss than a low-carb diet of equal calories, even though the low-carb diet sharply reduced insulin levels.

The best answer to the question of which matters more: What we eat or how much when it comes to weight loss and weight gain prevention, comes from epidemiological studies that track eating patterns and body weight in large populations. According to this type of research, the amount of food eaten by the average American adult increased by about 300 calories between 1978 and 2009. This number alone is able to account for all of the weight gain that Americans experienced during this period.

So, there you have it: Weight gain comes from eating more. Case closed. But wait a minute, are we actually eating more of everything we always ate? We are not. A closer look at the epidemiological data shows that added fats such as soybean oil and canola oil account for more of the extra calories that Americans are eating than any other food. Between 1980 and 2010, consumption of added fats increased by 28 percent in the U.S.

Foods such as chips, cookies and French fries that contain added fat are the easiest foods to overeat. Adding fat to a naturally low-fat food such as a potato makes it far more calorie dense without making it more filling. A boiled potato is one of the most satiating foods you can eat, while potato chips and French fries are among the least filling. Additionally, adding fat to foods makes them more palatable, meaning you want to eat more of it. Pizza, for example, with its high-fat melted cheese layer, is much harder to stop eating than just baked dough with tomato sauce slathered on top.

In a recent scientific survey, subjects were asked to name the most addictive foods—the foods they have the hardest time to stop eating once they’ve started. Twelve of the top 20 foods named contained added fat. (Pizza topped the list.) Other research has shown that some of these same foods are the biggest contributors to long-term weight gain in individuals. For example, a 2011 study from the Harvard School of Public Health found that people who ate the most potato chips gained the most weight over a 20-year period.

Given all the research and data, here’s what we’ve concluded: How much you eat is very important. You can’t gain weight without eating too many calories or lose weight without eating fewer calories (assuming your activity level stays the same). But what you eat is equally important because some foods are easier to overeat than others. The easiest foods to overeat are those that contain added fat. To avoid gaining weight this holiday/off- season—or any other time—make sure these foods have a small place in your diet.