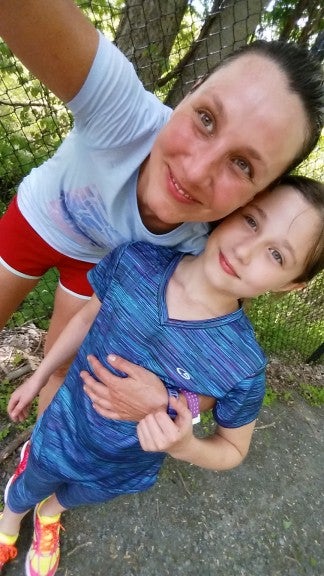 During my first pregnancy, I knew that the way I was going to keep up with my running post-baby was with a really good running stroller.

When baby #2 was on his way, I knew that I needed to add a double stroller. It was the only way I was going to stick with my running and possibly keep my sanity at the same time. The double was a life saver. It had the added bonus of feeling like strength work while pushing it. Six months after my son was born, I qualified for Boston for the first time at Marine Corps Marathon, taking my previous PR of 3:59 down to a 3:36.

When baby #3 was on his way, I researched triple strollers and decided that although I really needed one, I just couldn’t stomach paying a thousand dollars. That seemed to be the going rate for a triple stroller that would withstand many miles as I attempted to train for marathons with three little kids in tow. When a neighbor posted her triple stroller for sale on a local running message board, I literally shrieked and emailed her as quickly as possible, praying I was the first mom of three who had expressed interest.

I was the lucky first person and paid her asking price of $75 with a huge grin. I became the proud owner of “big red.” Big red, Chloe, Miles, Colton and I ran countless miles together. The farthest I pushed them was 13.1 miles with all of the kids cheering me on. A half marathon—a half marathon while pushing three humans. I think the training that summer gave me more confidence in myself than anything else. I told myself over and over, “I can do hard things.” And I did hard things.

Related: How To Pick A Running Stroller

When you are in the trenches of raising little people it’s hard to ever imagine a life where they will ever not need you as much. I can remember mothers of older children telling m to just wait until they can bike next to you. Then you will be able to really train. Life will be great and you will mostly forget about the nursing, the sleepless nights, the runs where you push almost as much as you weigh. I laughed and smiled at their comments, but part of me didn’t believe it. I wanted to train, not to meander and isn’t that what little people do? I thought there was no way on earth that a kid on a bike could keep up with the paces I wanted to run. Until it happened.

Last year we bought Chloe her first mountain bike. Our first run together was 6 miles. 6 “I can’t believe she just biked that far” miles, where she was ahead of me most of the time.

I loved watching her as I ran. I loved that I was wrong and that all of those moms that told me to just wait until my kid could ride with me were right. New moms tend to think they know it all —or maybe I just thought I knew it all, especially after the 2nd child. I had been there, done that. As I would learn, each child is unique and what works with one kid doesn’t work for another, even in the same family. I am realizing now, as the mother of an 8 year old, a 7 year old and a 4 year old, that those mothers who have been there and done that are wiser than me. They know that what seems impossible now will soon be possible. I’m wondering how I will train for a marathon this summer now that my kids are too large for the triple or double, but I will figure out a way. That’s what women do, especially moms— we figure out a way.

Related: How To Fit In Running As A Parent

This past Mother’s Day, Chloe and I went out for a Mother/Daughter Run/Bike date. The year before on Mother’s Day, I pushed Miles on our last run together in the single stroller. There is nothing I would rather do on Mother’s Day than spend it running with the little people who made me a mom. Chloe and I biked/ran 4 miles with an average of 7:58. It gave me those warm fuzzy feelings in my heart and was better than any store bought present.

If you are in the trenches now and your little people are small, if the thought of pushing one, two or three kids in a stroller makes you cringe, I promise it won’t always be this way. One day you will be able to have your kid bike next to you and if you are lucky enough your view will be them in front of you, while you try to keep up.